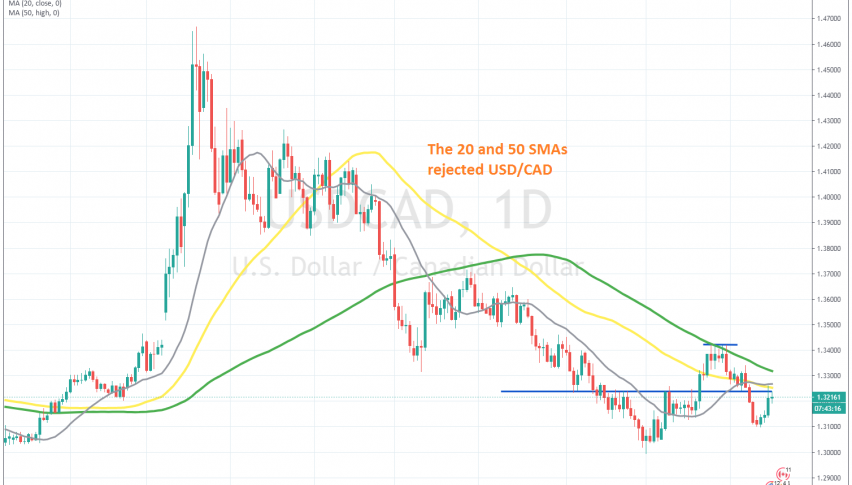 The Trend Remains Still Bearish for USD/CAD, As Long As MAs Hold

The retrace up seems complete on the H1 chart

USD/CAD has been bearish since March, following the surge higher from the coronavirus panic. The surge took this place 15 cent higher, but the decline has been bigger, taking USD/CAD around 17 cents lower and pushing it below the big round level at 1.30.

Although, the price didn’t stay too long below 1.30 and it started reversing higher in September, climbing more than 400 pips up. Some USD/CAD traders were hoping for a bullish reversal, but it turned out to be nothing more than a retrace higher before the price turned bearish again during the first two weeks of September.

The 100 SMA (green) stopped the climb on the daily chart and USD/CAD stared declining again, but yesterday we saw an other retrace higher. Although, this time the retrace ended lower, where the 50 SMA (yellow) and the 20 SMA (grey) were meeting. They provided resistance and the climb has stopped. We might open a sell forex signal from around here, but will see how crude Oil reacts because it is falling down, which is weakening the CAD.

Skerdian Meta // Lead Analyst
Skerdian Meta Lead Analyst. Skerdian is a professional Forex trader and a market analyst. He has been actively engaged in market analysis for the past 11 years. Before becoming our head analyst, Skerdian served as a trader and market analyst in Saxo Bank's local branch, Aksioner. Skerdian specialized in experimenting with developing models and hands-on trading. Skerdian has a masters degree in finance and investment.
Related Articles
WTI Crude Oil Fails to Stop its Losing Streak and Hits a Five-Month Low!
WTI crude oil prices failed to stop its previous 2-day bearish bias and dropped to a five-month low around below the $35.00 level as fears o
2 hours ago

Forex Signals Brief for Oct 30: GDP in Focus
9 hours ago