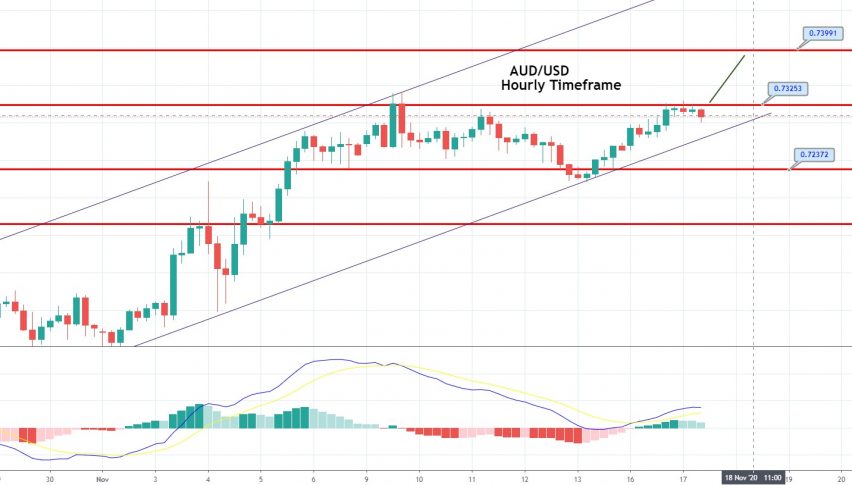 AUD/USD Double Top Pattern Holds – Is it a good time to go Short?

The AUD/USD pair closed at 0.73207, after placing a high of 0.73263, and a low of 0.72635. The AUD/USD pair followed its previous bullish trend, rising on Monday, amid the improved risk sentiment in the market, which emerged after Moderna announced that its vaccine proved to be 94.5% effective in Phase 3 clinical trials. The AUD/USD currency pair surged to its highest level in one week after the news that Moderna was ahead of Pfizer in the coronavirus vaccine race.

The vaccine from Moderna proved to be more effective than the Pfizer vaccine, as its efficacy rate came in as 94.5% compared to Pfizer’s 90%. The Aussie, which is perceived as risky, gained a lot after this news, and pushed the AUD/USD higher on Monday. The pair was also favored by the comments by RBA Governor Philip Lowe that ruled out negative interest rates. However, the gains in the AUD/USD pair were limited after China’s macroeconomic data was released on Monday.

China’s Retail Sales dropped to 4.3% against the expected 5.1% in November while the Chinese Unemployment Rate remained in line with the projected 5.3%. The mixed data from China failed to have any significant impact on the China-proxy Aussie on Monday. Meanwhile, the weakness of the US dollar also played an important role in pushing the AUD/USD pair higher on the board. The US dollar was weak against the Australian dollar on Monday, after the number of coronavirus cases in the US increased, despite the restrictions, and raised the need for further financial support from the government. The chances for massive support increased after Joe Biden’s victory in the US presidential elections, and weighed on the US dollar, ultimately adding strength to the AUD/USD pair on Monday.

Furthermore, on the data front, at 18:30 GMT, the Empire State Manufacturing Index for November was released, showing a drop to 6.3 against the anticipated 13.8, which weighed on the US dollar and supported the AUD/USD pair.

Bitcoin Plunges Over 9% - A Quick Technical Outlook!
3 hours ago

Daily Brief, November 26 - Everything You Need to Know About Gold Today!
5 hours ago
Comments