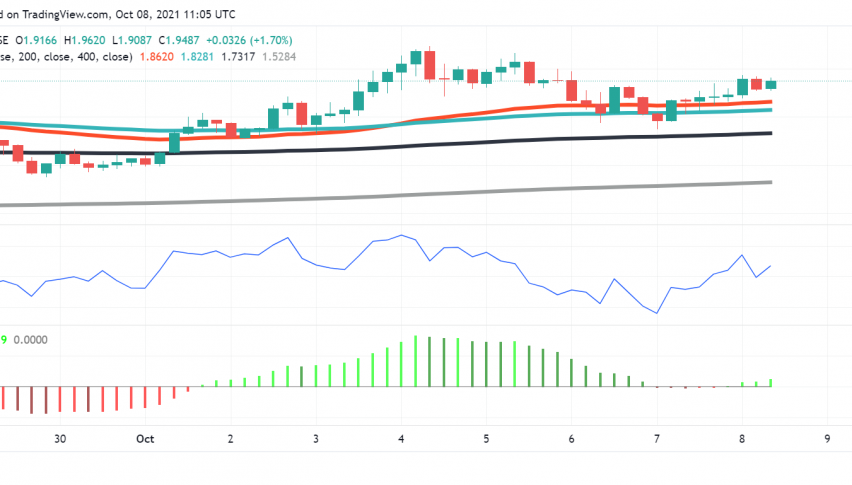 Early on Friday, investors appear bullish about Algorand (ALGO) as it makes way higher on the back of a risk-on mood in global financial markets with crypto king Bitcoin reclaiming the $55,000 mark over the past few hours. At the time of writing, ALGO/USD is trading at around $1.94.

Algorand Sees Rising Adoption of its Ecosystem by DeFi Projects

Algorand has been in the spotlight in recent weeks, enjoying soaring levels of adoption especially among DeFi projects that have been turning to its ecosystem on account of its speedy transaction processing capabilities. Tinyman, an AMM on its blockchain, announced its launch and confirmed raising $2.5 million in funding from 20 investors. It has been operating in testnet since August and looks ready to launch now, a move that can bring more users on the network and support the price of ALGO.

Another interesting adoption we can soon see is LoginID which has received a grant from the Algorand Foundation which it will use to modify its authentication APIs and SDKs to be used within the blockchain. LoginID will offer users of the network simple, one-touch authentication process, letting them verify their identity with biometric sensors and making the blockchain even more secure.

Number of NFT Projects Also on the Rise

But it’s not just in the DeFi space that Algorand has been making its mark – it is also becoming a popular choice among NFT players. Abris announced its curated NFT marketplace and white label NFT solution developed on its blockchain ecosystem. Abris has chosen to work with the carbon negative blockchain network to offer a green way for users to mint and sell digital art.

Another very promising development in the NFT space is Olivicola – Italy’s largest consortium of olive oil producers, leveraging the Algorand blockchain to launch an olive oil NFT traceability system. The initiative will bring about greater levels of transparency in the olive industry, offering users an open record of the origin, processing stages and preservation details in a tamper-proof and secure record on the blockchain. The initiative will benefit more than 250,000 members of the consortium, adding more users to the blockchain and giving it a very versatile use case.

On the H4 chart of ALGO/USD, moving averages along with technical indicators MACD and momentum are flashing a strong bullish bias. Algorand’s price is well above the pivot point at $1.84 and it looks like overcoming the key $2 mark should occur soon.

Further buying pressure can take ALGO towards testing the immediate resistance at $2.13. However, this would need the market sentiment towards cryptocurrencies to remain in the positive territory.