Bitcoin Consolidates Under $48K: What Could Drive a Sharp Downtrend? - Forex News by FX Leaders 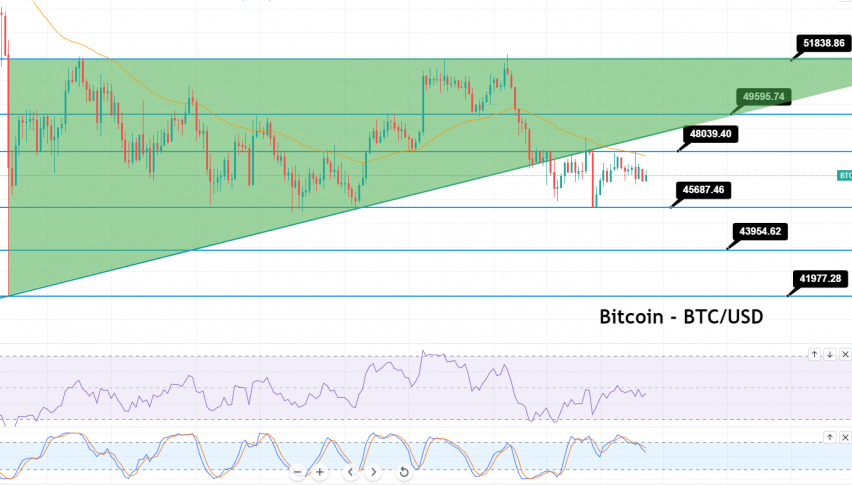 Bitcoin Consolidates Under $48K: What Could Drive a Sharp Downtrend?

On Monday, Bitcoin failed to continue its rebound surge of the previous week, hitting an intraday low of $46,740.9. Bitcoin was unable to surge beyond $48,500, and it began a new, steady decline. Following a period of trading underneath the $48,000 and $47,500 levels, BTC entered the negative zone. However, the reason for its downfall could be linked to the continued risk-off mood of the crypto market, which tends to damage most cryptocurrencies. The drop in Bitcoin was mainly unaffected by the favorable projections for Bitcoin in 2022.

BTC/USD
A financial specialist at the University of Pennsylvania’s Wharton School has warned about inflation and the Fed raising rates significantly more frequently than the market expects. He also suggests that Bitcoin has become the new gold for millennials.On Monday morning, the dollar climbed in Asia, but it had a sluggish start to 2022 because of holidays in many key Asia-Pacific markets. The global spread of the omicron COVID-19 strain continues to influence the market sentiment, bolstering the safe-haven demand. Even though the number of cases in the western Chinese city of Xi’an has declined, estimates by the Johns Hopkins University suggest that the number of cases globally topped 290 million as of January 3. The US Dollar Index, which measures the value of the US dollar against a basket of other currencies, has risen by 0.29 percent, to 95.870.

Traders of the US dollar have a busy week ahead of them. The highlights on this week’s calendar include the ISM data, the minutes of the Federal Open Market Committee meeting and the nonfarm payrolls at the end of the week. Furthermore, US President Joe Biden’s nominations for three Federal Reserve governor positions may also garner some attention.

According to reports, the president of El Salvador has provided six Bitcoin estimates for 2022. He anticipates that two more countries will recognize Bitcoin as a legitimate currency this year. Meanwhile, he expects El Salvador’s Bitcoin City to be built this year, and that the country’s volcano bonds will be oversubscribed. President Bukele also anticipates that BTC will reach $100,000 in value. El Salvador has purchased around 1,391 BTC since Bitcoin became an official currency of the country. However, these bullish projections for Bitcoin futures have had little impact on the BTC/USD thus far.

President Bukele of El Salvador believes that Bitcoin will be legalized in two more nations this year. As mentioned above, he expects El Salvador’s Bitcoin City to be built this year and projects oversubscription of the country’s volcano bonds. The price of Bitcoin may continue to decrease if it fails to recover over $48,000.