The Retreat in USD/CAD Seems to Be Over, Despite Better Canadian GDP - Forex News by FX Leaders

The Retreat in USD/CAD Seems to Be Over, Despite Better Canadian GDP

USD/CAD is resuming the uptrend as stochastic reverses higher

USD/CAD has been on a bullish trend since June, but the bullish momentum picked up pace since the middle of August and during this time this pair has gained around 11 cents. The USD has been surging as the FED continues to raise interest rates quite fast, while the decline in crude Oil has also been weighing on the CAD.

Although, the recent rally in USD/CAD stalled after clearing the July 2020 high (1.3646) as the USD surge suddenly stopped yesterday and the buck reversed lower. This forex pair retreated from 1.3830s to 1.36, falling below the 20 SMA (gray) on the H4 chart. But now it seems like the pullback has ended. The stochastic indicator became oversold earlier and is reversing higher now as buyers start to come in.

The USD which has been the main driver of this pair seems to have ended the retreat. Besides that, the economic data from the US earlier today such as unemployment claims was positive, as was the Canadian GDP report for July which is listed below, although it shows the situation as it was 2 months ago, making it outdated. 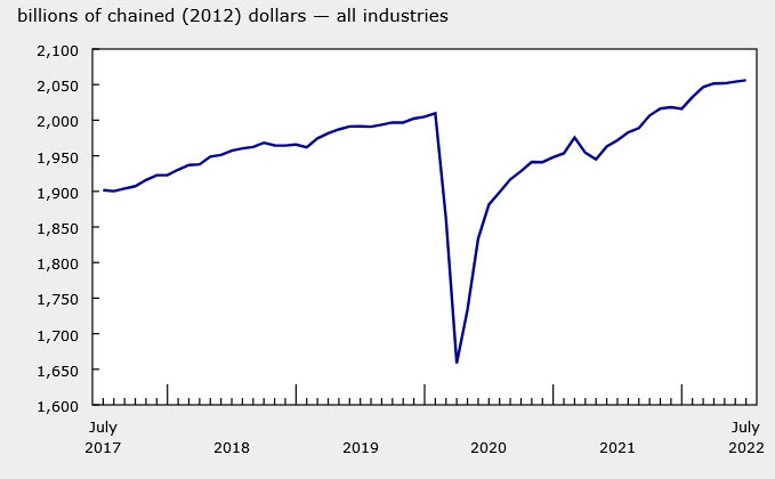 This certainly isn’t a roaring report and that was before rate hikes really took a bite out of demand. Although it is better than expectations of a -0.1% contraction. But, that’s not helping the CAD, with USD/CAD reversing higher today after yesterday’s dive.