Historically, corn has been trading within ranges for a long time, apart from a period between 2007 until 2014, when it made a few massive surges, pushing US corn futures ZC from around $ 200 and $ 250, to above $ 700, during the financial crisis in 2007, and above $ 800 at some point in 2012. But, corn couldn’t hold onto these gains; it came back down at the end of the past decade as most commodities and has formed another range since 2014.

The new range stretches between $ 300 and $ 430, with the price bouncing up and down inside this range for six years. It only broke above this range in the middle of 2019, but the 100 SMA (green) stopped the climb on the monthly chart, as shown above, and  the price reversed back within the range. For a number of reasons, which we will explain below, in the last four months, corn futures have increased from the bottom of the range to the top, where the price is trading right now, and the 100 SMA has caught up with the price again. Now the question is whether corn will reverse down from the top of the range or increase above it, breaking the 100 SMA as well.

Recent Changes in the Corn Price

The main reason for the appreciation or depreciation of any commodity is the supply and demand for that commodity, but there are several factors that affect supply and demand for corn. The economic slowdown around the globe, and in China in particular, is a major factor that caused the price to decline during the first few months of this year. But, since the re-opening after coronavirus lockdowns, the price has rebounded again, as it has been following oil prices higher since April. China has also rebounded nicely after the lockdown months early this year, and this has also been a big factor that impacts the corn prices. The weakness of the USD has also helped the corn prices to move higher, so there are quite a few factors affecting corn right now, since everything has been in a state of constant change this year.

Corn Price Prediction for the Next 5 Years

The supply side of corn is decided by production in major producing countries like the US, China, Brazil, Ukraine and India, and the weather, although this is a seasonal factor that doesn’t have a long lasting effect, especially since production foresees it, and is adjusted according to the demand. On the other hand, the demand is decided by several factors, one of the main ones being the price of oil and ethanol. About 40% of the corn produced is used for ethanol production and some regions, including the EU, have targets in place for bio-fuel consumption, which are likely to grow further, which will increase the demand for corn.

Crude oil itself is also a front-runner for corn, since the price of ethanol follows the crude oil prices. The higher the oil prices, the bigger the demand for ethanol and corn, which, of course, drives the price up. The bullish trend in corn of the last 4 to 5 months is also partially due to the bullish trend in crude oil, and with the coronavirus vaccine news in recent days, the bullish momentum is increasing.

The Chinese economy is massive. Growth in China leads to an increase in meat consumption, and corn is one of the main livestock feeds, which means an increase in the demand for corn. The bounce in the Chinese economy since spring, after the COVID-19 lockdowns, has been another factor for the bullish move in corn over the past few months. The US Dollar has also been pretty bearish since March 2020, adding more fuel to the bullish momentum in corn.

Technical Analysis – Is Corn Going to Continue Bouncing Within the Range? 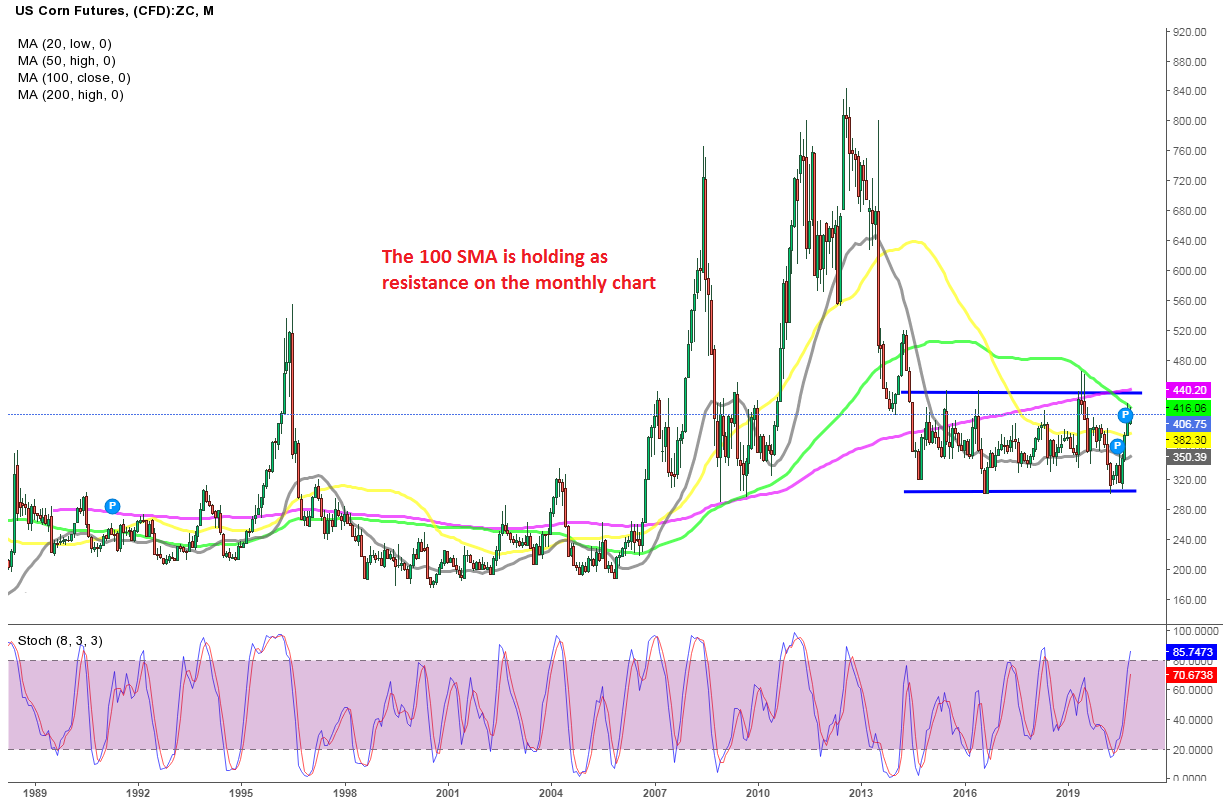 Is Corn going to reverse down from the 100 SMA?

As we mentioned above, US Corn futures :ZC were trading in a range, roughly between $ 200 and $ 300, during the 1990s, apart from a spike to $ 550 in ‘96. Corn is a seasonal product, and the see-saw price action, moving to the top of the range and then back to the bottom within a year, provides proof of this. In 2008 though, the price surged to $ 760, and then reversed back down right before the financial crisis, which might well have been a warning for what was to come. 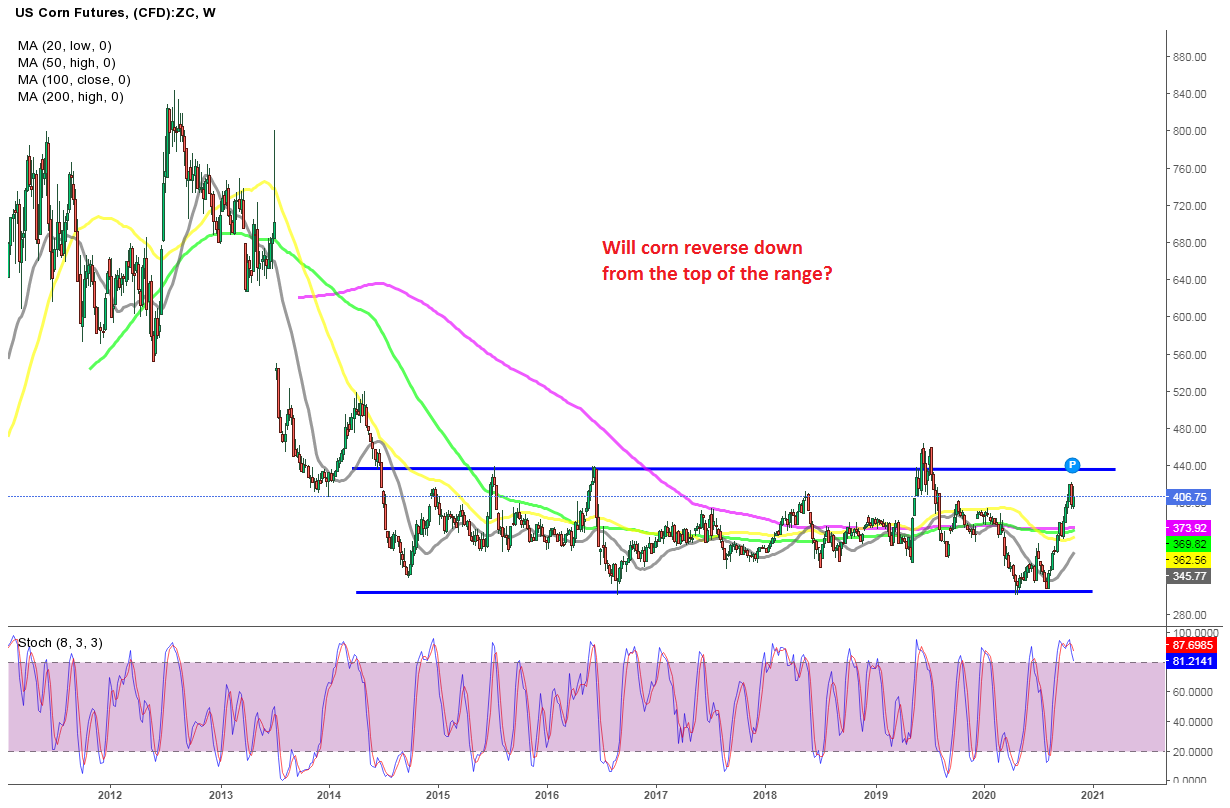