ChainLink, which is a decentralized network of nodes that translates data and information from off-blockchain sources/orders to on-blockchain smart contracts through oracles, was made public at a good time for cryptocurrencies. It is a relatively new altcoin that has only been around for about 1.5 years, but it has been undoubtedly bullish, having increased from $ 1 to nearly $ 20 by August 2020. The trend remains bullish, but the Link has lagged behind the rest of the crypto market, which absolutely surged during November.

The decentralized oracle network, ChainLink, which is built on Ethereum, went live in May 2019 when the big decline in the cryptocurrency market, which had been going on since the beginning of 2018, came to an end, and this market found itself in the middle of a bullish move. With the expansion of DeFi smart contracts, the demand for LINK/USD has increased too and it is expected to continue this trend as the oracle capacities and functions increase.

Recent Changes in the Link/USD Price

The Link, which is the coin for the ChainLink network, started life at $ 1 and it immediately began attracting investors/buyers, which sent the price up to $ 4.60s by the end of June. The price retreated lower, but it has never fallen below the opening level, and in the longer term the LINK/USD looks quite bullish, since the increased demand in other major cryptocurrencies affects the demand for Link coins. Despite the retrace of the last week of November, which was a bad week for all digital currencies after the massive surge earlier in the month, the main trend remains bullish.

Security is a factor in cryptocurrencies, especially after the spam on the ChainLink network in September. Moving averages have been supporting the LINK/USD on different time-frame charts, and the ultimate support has been on the 20 SMA. Now the price is back at this moving average, which is a decisive point for this crypto, as it stands on the balance between remaining bullish or turning bearish for the coming weeks and months.

ChainLink Price Prediction for the Next 5 Years

Recent Developments for the LINK/USD

ChainLink is a decentralized network, which is built on the Ethereum blockchain and operates through oracles. It is basically like a bridge between smart contracts, which come out of the oracles, and off-chain applications, to enable access to off-chain resources, such as web APIs, data feeds etc. The increasing numbers of non-compatible blockchains, APIs and datasets, increases the need for better communication between the off-chain and on-chain finance worlds. LINK is at the forefront of solving this issue, by offering a decentralized oracle network for node operators. They are incentivized to provide correct data by staking LINK, while the incorrect data spreaders lose their Link tokens to those who provide correct data. With the increase in DeFi and the need for interoperability between the two worlds, the demand and usage of the ChainLink Oracle network will increase.

Google Trends and Github dev activity show an increasing trend in activity over the past year for the LINK token, which partly explains the recent bullish rally in LINK/USD, as the activity in LINK-run oracles has increased immensely in the DeFi world. However, this is also largely due to the increased speculative demand for cryptos this year, as the uncertainty has turned them into safe havens. We also witnessed a spam attack on ChainLink on September 30, but the network continued to operate normally, so increased security will also be a factor for the Link.

Technical Analysis – Is The retrace Down Complete for the LINK/USD? 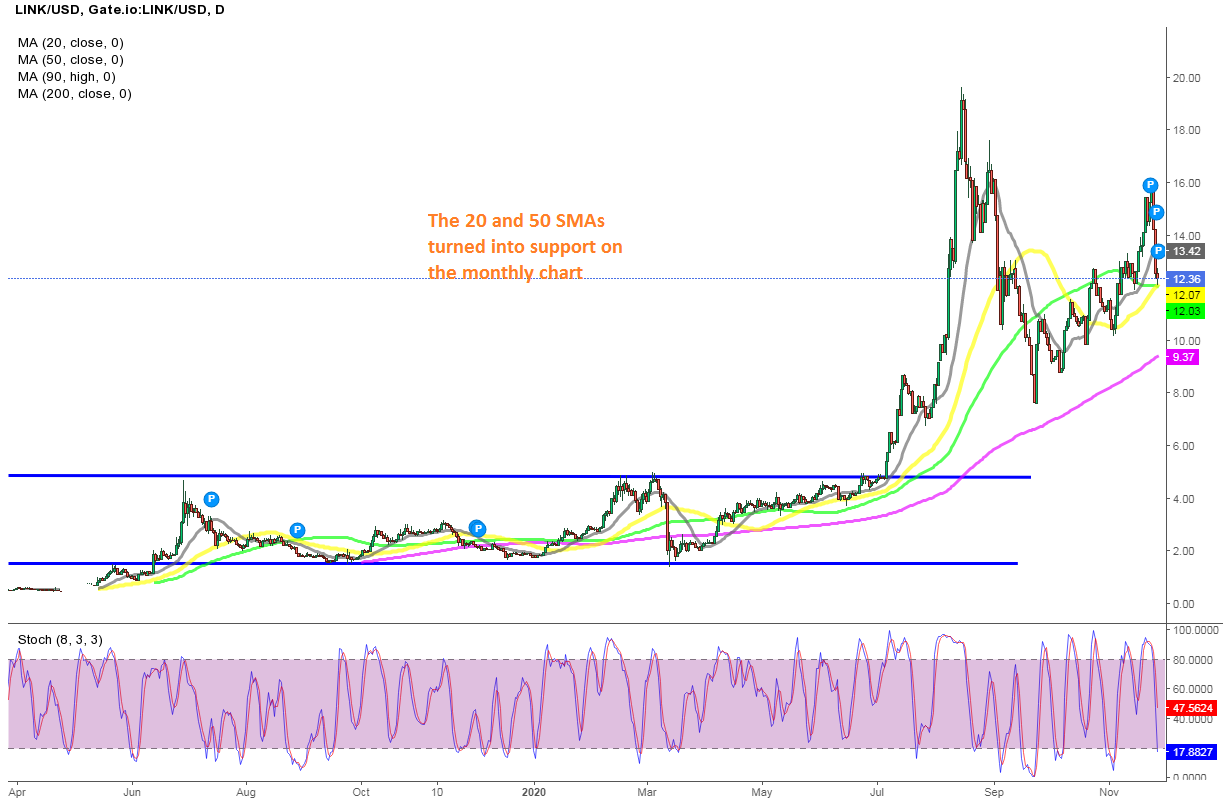 Lows have been getting higher since September

The LINK/USD turned bullish as soon as it was introduced to the public, increasing above $ 4.50 by the end of June 2019. But the uptrend reversed, and the crypto market traded sideways, within a range, for the rest of 2019, with the price bouncing between $ 1.40 and $ 4.60 until March 2020, when we saw a crash as the coronavirus broke out in Europe. But, after the initial panic, cryptocurrencies turned bullish, and the LINK/USD increased. In July and the first half of August, this crypto surged to $ 19.60, but reversed back down in September. The 20 SMA  once again held as support on the weekly chart though, pushing the price higher, but after another bullish run in November, the price has turned back down and it is now facing the same moving average. If the 20 SMA holds, buyers might come back again. If not, the retrace should continue lower. 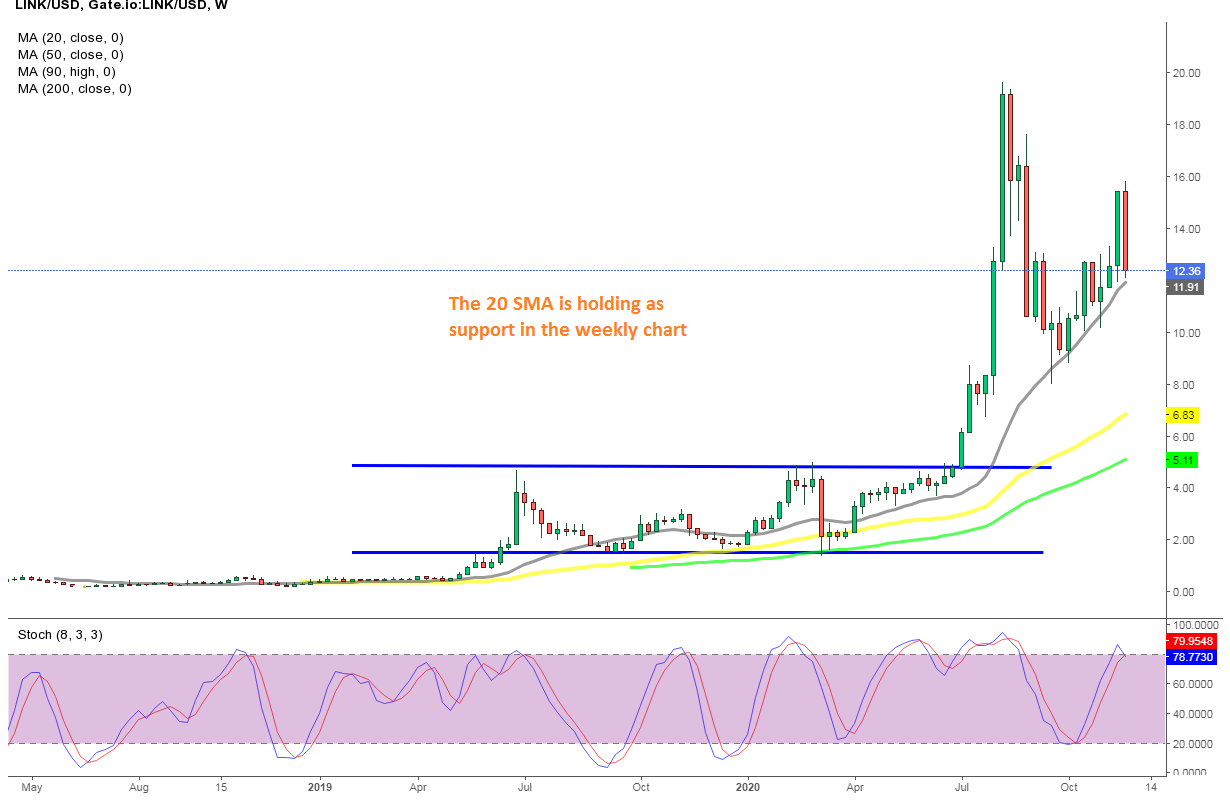 The pullback is complete on the weekly chart

On the daily LINK/USD chart, MAs were pushing the price up, squeezing it against the top of the range in June 2020, and then came the breakout that sent this cryptocurrency surging in July and August. But buyers called it off below $ 20, and the price retreated lower until the last week of September, when they decided to come back. However, the climb during October and November seems weak compared to other major cryptos, which made some amazing gains. The price retreated lower in the last week of November, and it is now trading just above the 50 SMA (yellow) and the 100 SMA (green) which have acted as support and resistance before. Let’s see if they will hold.