Traders of the financial markets, small or big, private or institutional, investing or speculative, all try to find ways to limit the risk and increase the probabilities of winning. There are many Forex trading strategies out there and hedging strategies is one of them. In fact, hedging is one of the best strategies to do just that, that's why many large institutions require it as a mandatory component in their tactics. There are even investment funds that are named after this strategy because they 'hedge' most of the trades and so they are called 'hedge funds'.

In most industries, in order to limit the risk of loss, you should buy insurance. This applies to the financial markets as well, but in order to avoid the insurance fees, the hedging technique has been developed. The futures market was founded in the 19th century to protect the traders from potential losses due to price fluctuations of the agricultural commodities. To hedge means to buy and sell at the same time or within a short period, two different instruments either in different markets, like options and stocks, or in just one market such as the Forex market.

In Forex, hedging is a very commonly used strategy. To hedge, a trader has to choose two positively correlated pairs like EUR/USD and GBP/USD or AUD/USD and NZD/USD and take opposite directions on both. Hedging is meant to eliminate risk loss during times of uncertainty and it does a pretty good job of that.

But safety can't be a trader's only concern while trading, otherwise it would be safest not to trade at all. That's why we use technical and fundamental analysis to make the hedging strategy profitable, not just safe. This is where the analytical ability that will make you a profit while you take opposite positions on correlated pairs will come into play. When deciding to hedge, a trader should employ analysis to spot two correlating pairs that will not act exactly in the same way to the upside or downside movement.

As they say, a picture is worth 1000 words, so let's illustrate the hedging benefits and scenarios with some real charts and events that have happened in the recent past.

Examining the charts above, we can see that at the beginning of May both Euro and Pound were at big round levels against the Dollar, 1.40 and 1.70 respectively, which were supposed to provide resistance. With EUR/USD and GBP/USD on uptrends for more than a year, a correction or a reverse at best, was late overdue. A short on both pairs seemed reasonable at those levels. But it would be too much of a risk to enter 2 short positions on correlating pairs or even one if the short didn't work out. So we would have to analyze which of these pairs was the weakest so we could hedge, short that one and enter long on the other.

Technically EUR/USD had made a 1,300 pip run from the bottom more than a year ago, while GBP/USD had made a 2,200 pip journey. So Euro was not as strong as the Pound and this means that if the dollar strengthened, EUR/USD would fall harder. Adding to that was the data and macro-economic outlook between Euroland and Britain. Europe is still struggling and the data hasn't been impressive lately, while the UK is on fast expansion, data has been exceeding expectations and rates raise is on the agenda of BOE. This would leave us with shorting the Euro, since it had the best chance to fall and if it did it would be bigger than GBP/USD. But we can't be sure if it will fall, so we enter long GBP/USD, because it has a better probability of continuing up, and if it did reverse it would be a smaller reverse than EUR/USD.

Almost at the same time, both pairs reached the peak and started falling quickly. EUR/USD fell about 500 pips and GBP/USD fell about 300 pips. If we shorted Euro and went long Sterling with one lot each, we would have taken 5,000 USD in the first and lost 3,000 USD on the second pair, leaving us with a 2,000 USD profit. Looking at the same charts again, after completing the retrace and forming a base around 1.50 for Euro and 1.67 for Pound, we might decide to take a long.

The same analysis applies again and we short EUR/USD and go long on GBP/USD at the beginning of June. GBP/USD makes a 350 pip move to 1.7050 and EUR/USD manages only 150 pips. So 200 pips with standard lots would have made us a 2,000 USD profit. If they both continued to fall, the Euro which we shorted, would fall harder. Meanwhile, GBP which we longed, would see smaller losses, so we would still be in profit. That is the whole point of hedging, smaller profits, but no losers. We can, of course, increase the profits by increasing the size of trades.

A second example is the hedge trading between the correlating commodity currencies AUD and NZD. On the weekly charts of these two currencies against USD below we can see clearly that AUD/USD has been in a strong downtrend of about 2,000 pips and the retrace was only about 800 pips. This is while NZD/USD is more on an uptrend, with a bigger move up than the previous decline. So after the retrace on the weekly and the daily charts about 4-5 weeks ago, the uptrend was about to start the next leg up. The best option would be to take a long on NZD. But to be safe, in the case of failure to continue the uptrend, we take a short on AUD.

If the pairs were to fall, AUD which we sold, would fall harder since it's more vulnerable and NZD, which we bought, would see a smaller decline. So the loss on the latter would be smaller than the gain on AUD and that would give us a profit nonetheless, even if we were wrong about the uptrend. If we were right, the NZD long would see bigger gains than what we would lose on the AUD short, so we would still be left with a profit.

After the entry in the beginning of June, NZD/USD has seen a 400 pips gain and AUD/USD, which we sold, has had only about 200 pips gain. That leaves us with a 200 pip profit. When hedging we have to compensate the less volatile pair with a bigger size. NZD moves are about 20% smaller than AUD, so when entering the hedge the NZD trade size would be 20% bigger, therefore making the 200 pip profit a 2,400 USD profit. 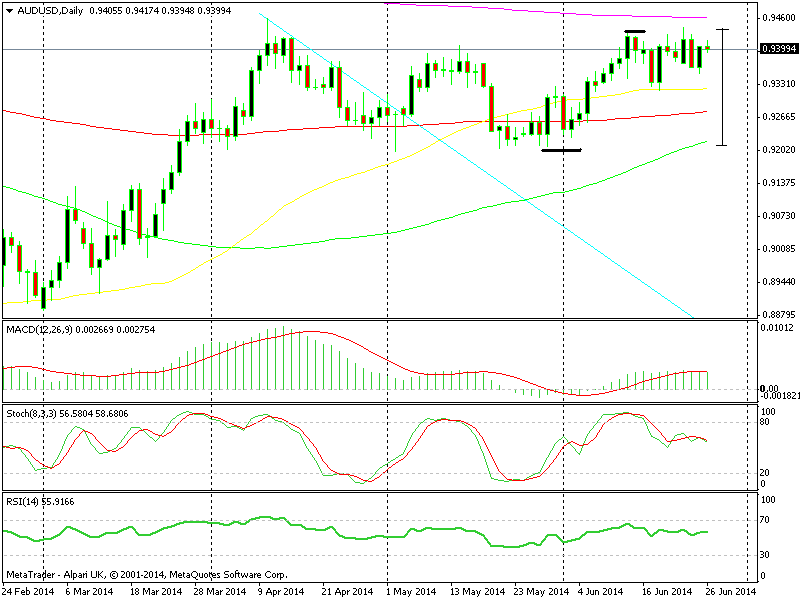 To summarize, hedging is not a strategy for predicting which way a certain currency pair will go but rather a method of using the market to your advantage, even if you don't know. Hedging strategies provide an 'insurance policy' for trading on the Forex market and if you do it right you can guarantee that you never lose another trade again.