Since the economic data is quite light today, the most important economic release of the day by far is the UK inflation report. Inflation is one of the best things the BOE (Bank of England) could ever ask for. That said, the positive effects of the weaker Pound won´t last forever and although big UK producers don´t import raw materials on a monthly basis, the effect of the weak GBP on inflation might be wearing out since the GBP crash happened months ago.

The UK PPI data (producer price index) shows exactly that; import prices have fallen by 1-1% in November. That´s the first decline in about 6 months but it does take some shine off this report and more importantly, this is the first sign that the benefits from weak GBP are coming to an end.

Apart from that, the rest of the UK inflation report was quite upbeat. UK CPI (consumer price index) jumped by 0.3% in November to 1.2% while RPI (retail price index)  moved 2 points higher to 2.2%.The most important piece of data though is the core CPI number which also beat the expectations when it moved to 1.4% from 1.2% in the previous month.

CPI is very important since it is the measuring scale that the central banks use for inflation and 2% is the target for the major banks. So, the closer we crawl to that level the more impact it has on the local currency in case of a positive surprise. By the way, the I heard some guy from the BOE a couple of weeks ago that BOE won´t tolerate inflation if it gets way above their target, but there´s still a long way till then, so GBP traders don´t have to worry about that right now. 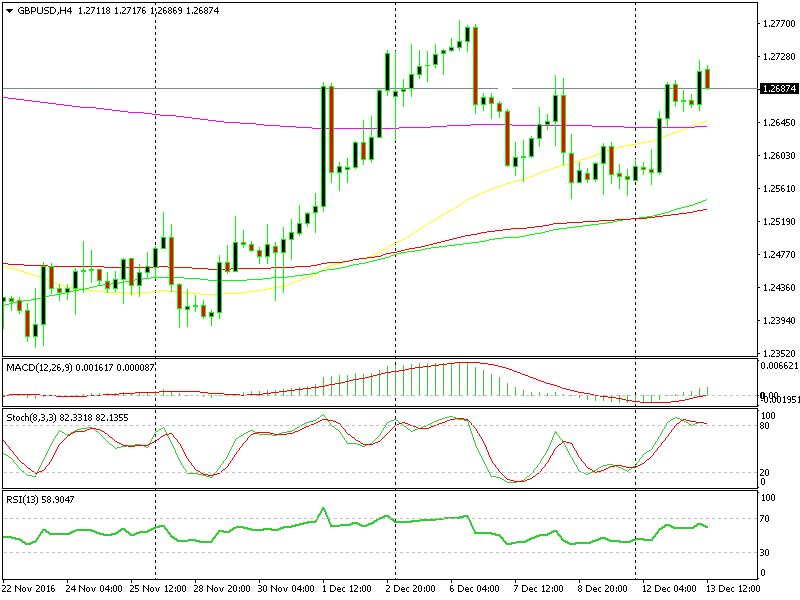 What we have to watch though, is the break of 1.27 once again in GBP/USD. This level loses importance every time it breaks so, now that this level is broken again we must keep our eyes on 1.28. The price is getting ever closer to that level which is one of the main lines in the sand for me.

I´m thinking of shorting GBP/USD big time when the price gets up there, but I will leave some room to add some more to my position in case we reach 1.30. But trading the GBP is not that straight forward right now, so I´ll keep an eye on how the legal Brexit process progresses.

Selling AUD/USD Again, As Powell Consists on Inflation
1 day ago