Another week, another big forex event left behind. In November, we had quite a few important events which had a great impact in the forex market. The hard Brexit talk from the UK government was the first event with a great impact on the market, which caused the GBP flash crash.

Then, the UK High Court ruled against the UK government – and this time it sent the GBP surging. But the biggest event (which will haunt the markets in 2017) was the US presidential elections. The Dollar is about 10 cents higher now because of that event.

More events were scheduled for December and we already experienced these in the last two weeks. Last weekend, the Italian referendum sent shivers through the spines of the Euro bulls but currency ended up much better off by mid-week. But Draghi and Co. took things in their hands once again and killed the Euro rally before it even reached puberty.

This week it was the FED’s turn to be the star of the show. The market had been waiting for this meeting since last December. It´s been the most anticipated meeting and it is worthy of the forex history books.

We know the FED hiked the interest rates in what was the least surprising policy move ever. The market didn´t ignore what came next, though, which was a surprisingly hawkish FOMC statement… the first such statement to come with a rate hike. Instead, a fresh wave of USD buying began, another leg of this USD uptrend unfolded and another opportunity to grab some pips appeared.

EUR/USD and USD/JPY finally made some decent breaks, but we couldn´t take advantage of that with our long-term forex signals. We had some successful short-term forex signals, though, which made us 82 pips by the end of the week. 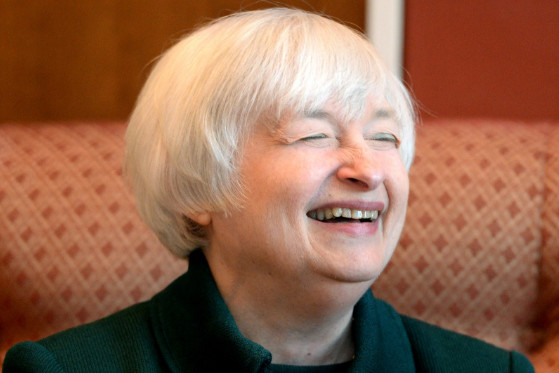 Get hawkish when they least expect it

There have been quite a few decent moves this week that offered some great winning potential, but the moves happened all at once. The FED rate hike was the event which sparked the fire and although everyone knew it was coming the reaction was considerable.

More than the rate cut itself, the move was attributed to a rather hawkish FED statement, which came as a surprise since the FED has never attached a hawkish FOMC statement to an interest hike. That was the reason this move caught us by surprise, and we couldn´t find a decent price to open any long-term signals.

That said, we did have a few short-term signals which increased our monthly profit further. We opened 15 short-term forex signals this week, three of which hit stop loss while the rest were closed in profit, which gives us a satisfactory 82:20 win/loss ratio.

The US Dollar has obviously been the strongest major currency since the ECB meeting last Thursday, so we concentrated on selling EUR/USD and buying USD/JPY during retraces this week.

We had five winning forex signals but the two losing ones reduced our EUR/USD profit to just 32 pips. So, the best forex pair for us this week remains USD/JPY. We held back from overtrading this pair and picked the right entry spots during pullbacks. It proved to be a successful trading strategy since we made 61 pips on this pair alone.

Last week, the ECB went dovish again and extended the QE programme a few days after the Italians voted against the referendum. But the forex market does not stay emotionally attached to past events for long. In fact, it moves to the next event as soon as the current one is over, so the ECB and the Italian referendum were long forgotten when the week started.

The attention shifted across the ocean to the FED meeting. A rate cut was a done deal this time so there was no interest in that. The money was on the FED outlook for next year and their monetary policy path.

The FED has been dovish since Yellen set foot in the office, but this was the time to hike the interest rates which contradict each other, so the market didn´t know what to expect and most forex majors traded calmly until Wednesday.

On Wednesday evening, the final moment arrived at last. The long-awaited December meeting was here and the FED didn´t disappoint, not that they had any options. They hiked the interest rates by 25 bps (basis points) and we saw a wave of USD buying in the first few minutes and then a pause.

That didn´t last long though as forex traders got a chance to look into the FOMC statement. This was the moment everyone was waiting for as it went against the previous FED statements. The FOMC statement was more hawkish than the market was expecting, which came as sort of a surprise given the previous FOMC statements. But then again, the FED had no other choice than to accept the reality and acknowledge the recent domestic and global economic pickup.

Yellen tried to tone it down a bit when she showed up for the press conference, but the market looked beyond her soft comments. This was the first time the FED increased interest rates without delivering a dovish FOMC statement. This was seen as hawkish and the dot plot for 2017 shows that we´ll see three rate hikes next year… not that I blindly trust that. It showed the same thing last December but we only got one rate hike at the limits of time this year. 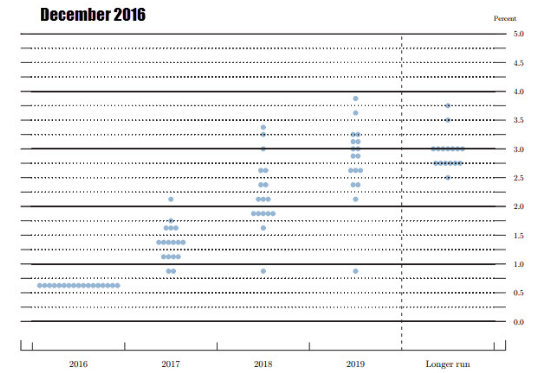 The FOMC dot plot shows three rate hikes this year, but so it did last year

Nonetheless, that was more than the market begged for and the second wave of USD buying started. EUR/USD finally broke the 1.05 and 1.0460 long-term support levels while USD/JPY surged higher above 115, reaching as far as 118.67 in my trading platform. This puts the Buck on a really good position and without and major events in the coming weeks, I expect it to gain ground further.

We must keep in mind though that we´re heading towards the winter holiday season, so some year-end cash flow from international firms and institutions and position adjustment by forex traders might offset this USD uptrend a little. That might give us the wrong impression that the rally is over, but don’t get fooled, once Christmas and New Year is behind us the traders will come back to the US Dollar.

The economic data in the recent months has shown a notable improvement of the global economy. The surprise nowadays comes when we see disappointing figures, but even when the numbers miss the expectations – they´re still in positive territory.

This week´s data showed just that. The US retail sales numbers were shown in red in most forex calendars since they came out below expectations, but at 0.2% the sales are still growing, just not as quickly as the market was expecting.

The same goes for European services PMI – also displayed in red – but at 53.1 PMI it remains 3.1 points above the breakeven/flat level. Eurozone inflation remained unchanged at 0.6% this month but is allowed a month of breathing space since it has been moving higher from 0% to 0.6% in the last six months.

Just before I forget, the BOE (Bank of England) meeting was held on Thursday but nothing new on the agenda and with the FED rate hike the previous evening, no one even noticed it.

So, the FED hiked interest rates this week and, judging by the hawkish FOMC statement, the consensus is that the will steepen the monetary policy path. This is bad news for high-yielding currencies such as the Aussie and the Kiwi because less money will flow their way in their search for high yield now.

Instead, the investors will pour their cash into US-denominated assets and investments, now that the rates are moving up in the US. In fact, some of the big names in the forex industry are already calling for AUD/USD short selling. Fundamentals seem right for this sort of forex strategy for 2017, but let´s have a look at the technical picture to see if technical analysis falls in line with the fundamental analysis. 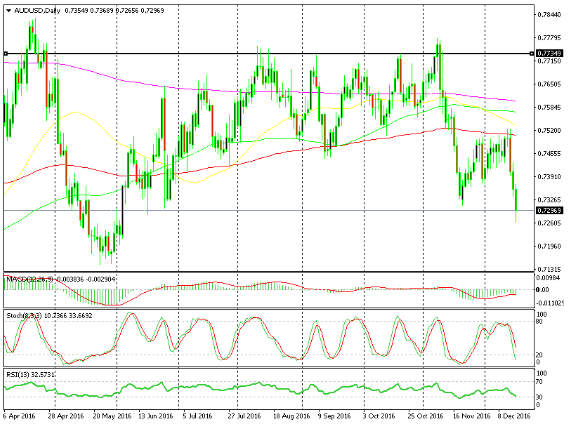 The 100 SMA in red was a perfect selling sport

Looking at the daily AUD/USD chart above, we can see that Wednesday was the best time to sell this forex pair. Fundamentally, the FED was about to hike rates in a few hours so half of the picture looks great for shorting. The technical half of the analysis gave the same signal for AUD/USD traders, sell.

The price had been failing to break above the 100 smooth moving average (100 SMA) in red for a few days so that´s one in the pocket for technical traders. The 100 SMA has been providing support for months, which means that now it will into resistance and so it did, making it two in the pocket.

The stochastic indicator gave the third selling signal since it was well overbought that day. Now the price is more than 200 pips below the 100 SMA, so we can say that it was a great opportunity for a long-term sell forex signal in this pair. Too bad we hesitated but in our defense, and no one expected the FED to be both hawkish and raise rates at the same time. 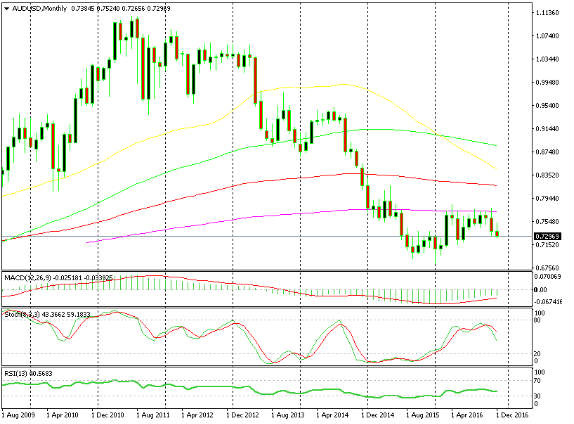 Switching to the monthly forex chart, we can see that the price is heading down after failing to break above the 200 SMA in pink. The stochastic and RSI indicators are heading down as well, so the technical picture in this timeframe chart is pretty bearish too, which outweighs the oversold levels on the daily chart. Maybe there will be a retrace in the next few days, before the next leg down. We´ll be ready though so we don´t lose this opportunity, too.

The FED finally did it this week; they beat the fear of the unknown and took the initiative to raise interest rates after a long year of waiting dotted with disappointment. Donald Drumpf´s victory last month and the improved market sentiment gave Yellen the final push she needed so badly.

Now we are entering the Christmas holiday period so expect the market to be irrational. The year-end international cash flow and closing of long-term forex positions before the new year will drive the market around in what´s left to trade until December 31st. So, be careful out there guys and don´t stay too long in a position, because I don´t think forex traders are willing to start another trend at this time of year.

This Might Be the Bullish Reversal for Ethereum, As It Moves Above the 50 SMA
2 hours ago