Morning, traders. Yesterday, the market traded in a mostly unchanged fashion, showing next to no response to Article 50. Perhaps, most of the affect of Article 50 was already priced in seeing as the GBP/USD fell nearly 200 pips one day before Article 50 was triggered. As mentioned in the ending remarks of the 29th of March Morning Brief, we cautioned that the market was likely to remain unpredictable and highly volatile. We could see drastic changes or we may not see a lot of movement – anything is possible. Apparently investors chose to go with the second option.

Theresa May, the Prime Minister of United Kingdom, formally triggered Article 50 of the Lisbon Treaty yesterday on March 29th. She signed and delivered a letter to European Council President Tusk, in which she formally requested to trigger the Brexit, under which the U.K will leave the European Union. The next step is a long process of negotiation that is likely to take about two years.

In response to the uncertainties caused by Article 50, investors moved their investments from the Sterling to the U.S dollar. The increased demand for the U.S dollar resulted in a price increase. This is why the Dollar index rose 0.17%, to trade higher at $99.95.

The Euro, as a single currency, remained bearish for the same reasons discussed earlier. Article 50 of Brexit is about the U.K leaving the European Union. So understandably, the shocks are not only limited to the GBP, but also to the Euro.

As a result, EUR/USD continued to trade lower at $1.0752 for the 2nd consecutive trading day.  Today, we need to monitor the preliminary inflation figures from Germany to predict further trends in the market. 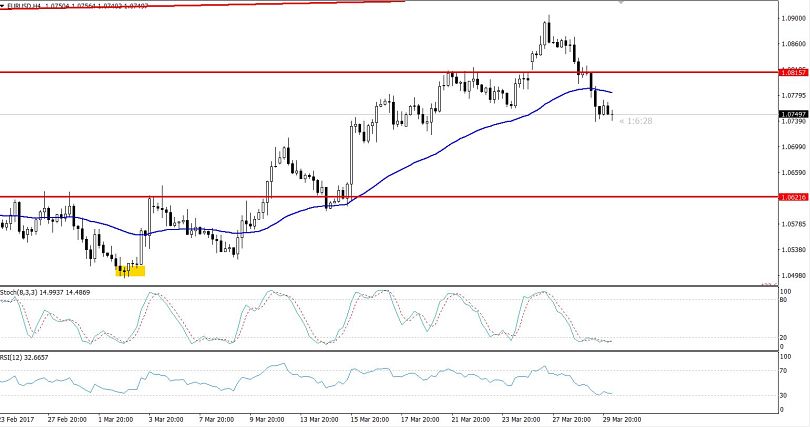 The technical side of the EUR/USD is signaling a bearish bias. The bullish trend seems weaker now. The market is obviously being influenced by the ongoing uncertainties caused by Article 50 and upcoming elections in different areas of the Eurozone.

Looking at the 4 – hour chart, the pair has dropped below an ascending trend line resistance of $1.0798. On the same level, the EUR/USD has crossed below 50 periods EMA. Lastly, the RSI is holding in the selling territory.

Although, the technical side is signaling a strong bearish trend, we can't say that this is a long-term forecast. Honestly, we can't predict a long term trend in a situation where the market is coming up against so many uncertainties and investors lack the confidence to take up longer term positions. Considering the given factors, the EUR/USD is likely to trade in a narrow range of $1.07260 – $1.07750. However, we may see a breakout in the New York sessions.

GBP/USD – The Pair In Focus

Similarly, the Sterling remained under pressure and fell into losses as Article 50 of Brexit made headlines. But, the dip in the GBP/USD was reasonable.  At the moment, the pair is supported as the triggering of Article 50 didn't come as a surprise and almost all of it's impact was already priced in by speculators.

Let's keep an eye on the GBP and jobless claims figures from the U.S that are due to be released today at 13:30 GMT. 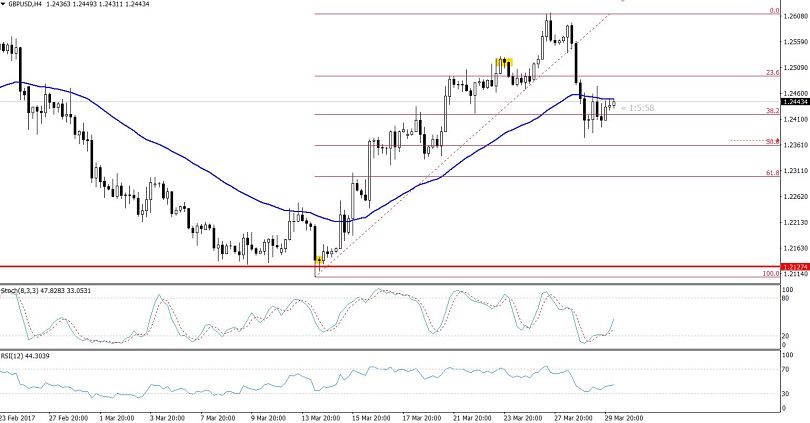 Just like the EUR/USD, the correlated currency pair GBP/USD is trading with the same technicals. It has also violated an ascending trendline support at $1.2520. In addition to this, the fact that the pair crossed below 50 periods EMA demonstrates that investors have a selling sentiment. Overall, the pair has stuck in a narrow trading range of $1.2395 – $1.2475. We recommend waiting for the pair to determine a clear trend before making a decison. Perhaps the New York session will bring some clarity.

Fellows, though the market is still uncertain, the economic figures from the U.S are likely to give us a few trading opportunities in the New York session.

Stay tuned as trading signals are on their way!

Consumer Confidence Remains Negative in Europe - Does It Mean Recession Is Coming?
2 hours ago

GBP/USD Enters Overbought Zone - Why 1.2500 Could Drive Sell-off
18 hours ago