The Central Bank Marathon Continues With The SNB

It looks like all central banks have agreed to leave things as they are for today. This started with FED´s Evans and the RBA (Royal Bank of Australia) meeting minutes early this morning.

I was a bit worried that there would be some volatility from the RBA minutes. We had an open forex signal in NZD/USD. This is usually affected by economic events happening in Australia, but there were no surprises.

This was good for our signal, which closed in profit. The 50 SMA (yellow), which we based our signal on, worked well yet again. 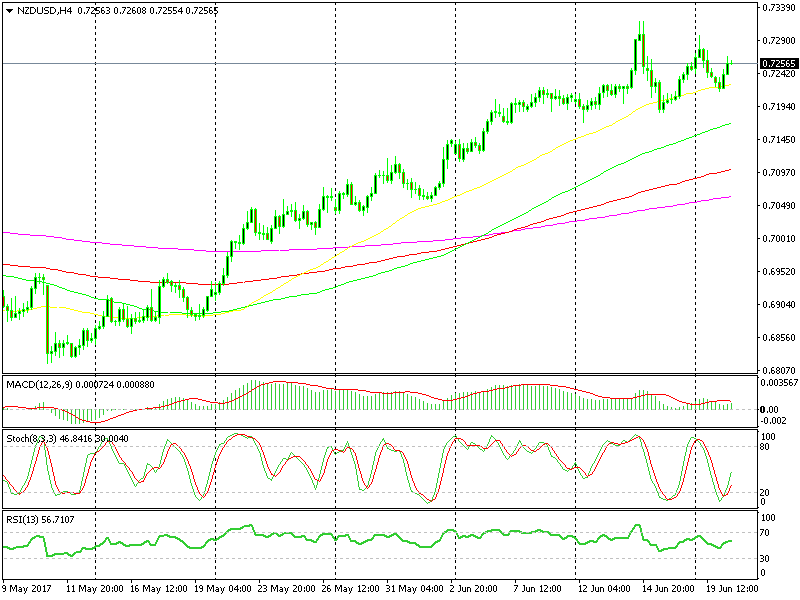 A couple of hours ago Mark Carney gained a lot of attention when he dismissed all the rumors that have been circulating since the BOE meeting on Thursday.

After Carney, it was Jordan´s turn to steal the spotlight. Jordan is the head of the SNB (Swiss National Bank), the guy who killed thousands of forex accounts back in January 2015 when the SNB removed the EUR/CHF peg.

Speaking of EUR/CHF, we just closed our sell forex signal in this pair manually for a nice profit. This pair has been sliding today amid the slight risk aversion sentiment in the market.

The strangest thing back in 2015 was that the SNB went against the forex traders who were on the same side as them. Basically, everyone who was buying EUR/CHF, like the SNB, was hovering near 1.20, got screwed once the 1.20 peg was removed.

Anyway, let´s forget past nightmares. Jordan can´t move the market like that anymore. He just made the usual speech, the Swissy is overvalued and tightening the monetary policy is out of the question. So, that´s probably the reason that CHF pairs are sliding. At least, we got our pips from EUR/CHF.