No one was expecting anything exceptional in June. The FED was supposed to hike interest rates, as they did, but it was all priced in and the market was not interested in the action.

It kicked off with the FED hiking rates on Wednesday the second week, but it wasn´t this what started the action, it was the hawkish rhetoric from Yellen. Actually, the rhetoric from central bankers was all the market was interested in.

A similar thing happened with the GBP and Bank of England (BOE). Everyone was thinking that the BOE wouldn´t raise interest rates, particularly after the UK elections (where PM May lost her majority).

She went in to increase the Tory majority in the parliament and lost it, and that´s because of the hard Brexit line she´s been pursuing. But inflation is going through the roof in the UK, so Carney had to turn hawkish which gave GBP a good boost. I say “had” because he sounded like he didn´t want to the entire time.

Even the sentiment improved considerably in the market this month, which led to commodity currencies gaining 3-5 cents in June. 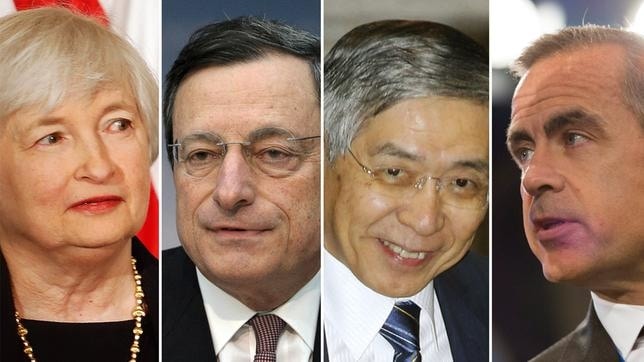 They all look a bit happier now, don´t they?

This was a tough month because you couldn´t predict what the central bankers were going to say, they have been dovish since late 2008 when Lehman Brothers collapsed, now they turned completely hawkish altogether.

Anyway, let´s start with the EUR/USD signal; let me get it out of my system. We opened it in the first week of May after Macron had won the French presidential elections. This forex pair opened with a 200 pip gap as you can see on the weekly forex chart below. 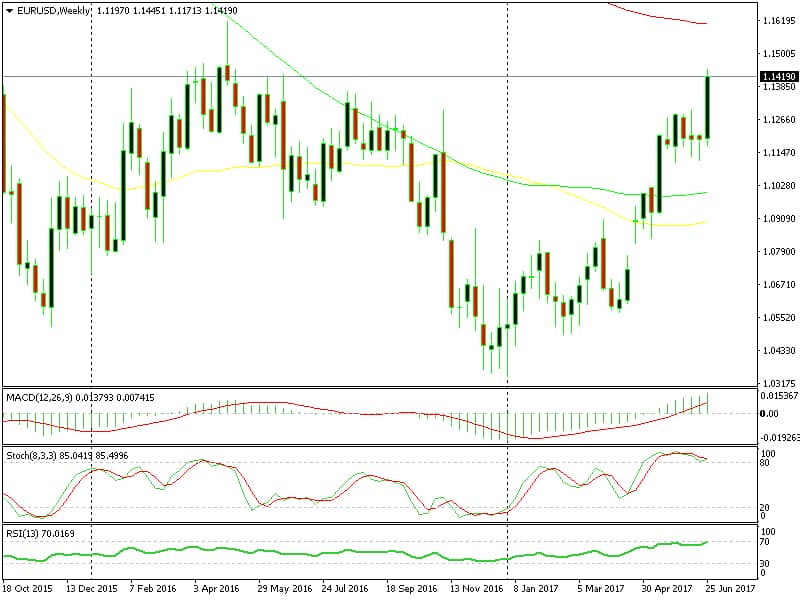 There were quite a few other indicators pointing down; the main trend was still down (and it remains so), stochastic and RSI was overbought, the candlestick of the previous week closed as a doji which is a reversal signal and the 100 SMA (green) was standing just above. Besides that, the 1.10 level was supposed to provide some decent resistance.

But all the indicators couldn´t stop the Euro. The European Central Bank (ECB) has been forced into turning hawkish and after months of positive economic data from Europe, that´s all the market needed.

Anyway, as I said above, the market was tough and we were up and down from one week to another. At the end of the month, we were nearly slightly down, but the EUR/USD signal takes us about 500 pips down. So, we finished 495 pips down this month, although we´re well in profit so far this year.

This month was a good example of how the rhetoric from big guys can do much more than the actions themselves. That´s because most of the time the market already knows what´s going to happen before a rate hike/cut and everything is priced in unless it´s a surprise, but they don’t happen so often.

The rhetoric, on the other hand, catches the market by surprise and the market usually overestimates the future implications. That´s what happened in June. The FED hiked interest rates for the third time since December but the Buck didn’t gain a pip.

On the other hand, Mario Draghi tried as hard as he could for as long as he could, but the European economic data has improved considerably in the last year and the ECB has been forced to turn hawkish. That gave EUR/USD the last push above 1.14.

A similar thing happened to the Quid. Theresa May tried to get a clean hand in the British parliament and she lost the majority, which should have been terrible news for GBP since this complicates politics in the UK and weakens their position regarding EU/UK negotiations.

But, the rhetoric from the BOE proved to be more efficient for the Pound, not that Chairman Carney wanted that. In the third weekly review, I said that the BOE was stuck between a rock and a hard place because of Brexit so they couldn´t hike interest rates unless inflation hits the roof.

Well, a week later the inflation report from the UK showed us that it is headed there indeed. So, that forced the BOE into turning hawkish too and GBP/USD finally closed the month above 1.30 for the first time since September last year.

A strange thing that happened this month was the blockade of Qatar from the other Gulf States. Qatar is a big gas producer so this should send gas prices surging and consequently oil prices as well, which in itself should send the CAD diving, but this was the best month for the Canadian Dollar in more than a year. Well, good for the Loonie.

Besides a Brexit headache for the Brits, the economy has been showing signs of weakness. All sectors posted some disappointing numbers, manufacturing, services, construction, industrial production and even earnings. Only inflation jumped this month to nearly 3%, but that´s not a good thing when the economy is headed the other direction, particularly not for the ordinary Joe who is earning less while paying more.

In Europe, things followed more or less the same positive trend. There were a few hiccups here and there but nothing to worry about, hence the demand for the Euro.

GBP/USD tried to break above 1.30 in May, but it failed to close above it after the price traded there for a short period of time. It tried the downside this month after May lost the majority in the UK parliament and reached as lows 1.2590 but it reversed back up and gained speed after the surprising inflation numbers. 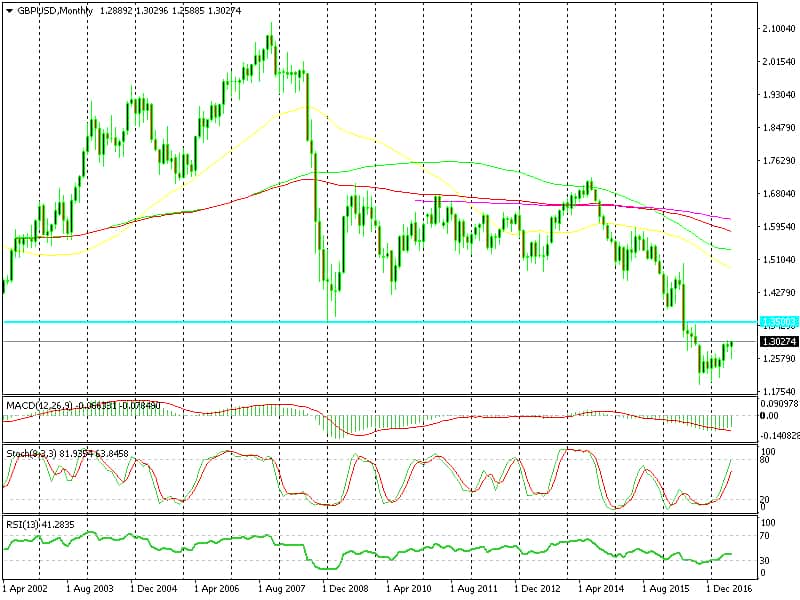 The first decent resistance comes at 1.35

This is a bullish signal and the monthly candlestick looks bullish as well since it closed as a hammer with a long wick which implies buying pressure.

The weekly chart looks even more bullish. You see that the price broke above the 50 SMA (yellow) in April, and since then it hasn´t been able to break back below it. 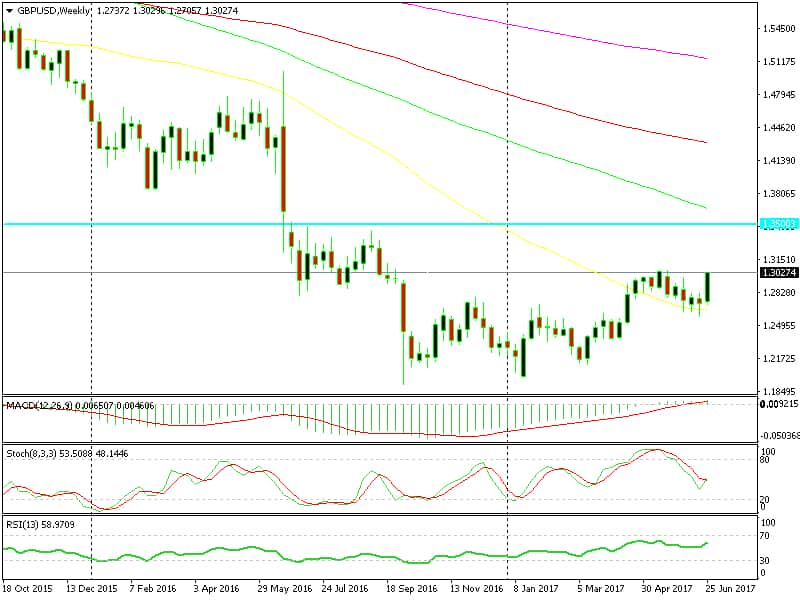 The 50 SMA provided solid support to GBP/USD in June.

You see that the last two penultimate candlesticks closed as hammers which again show buying pressure. The last candlestick is a bullish monster. But we still have to break last month´s high at 1.3048.

Apart from Britain, most of the large economies of the globe are doing pretty well, and improved further in June. This has improved the sentiment quite a lot in financial markets and the central banks have turned hawkish.

The FED was the first to turn hawkish this month, followed by the ECB and later the BOE. Even The Bank of Canada (BOC) turned hawkish, but the surprise is that all related currencies rallied but the USD. We´ll see how next month will be for the Buck, but I have a feeling that this USD decline might have stretched too far, so a decent pullback might be due.