Happy Friday, traders! We made it through another highly profitable week and the credit goes to highly volatile markets. Except for gold, the other instruments such as currencies, WTI crude oil, and stock market indices are on fire and are helping us to hit an awesome number of take profits with our trading signals.

I'm really excited to trade today as we have several high-impact economic events from the United States, Canada, and the United Kingdom which are definitely going to cause some serious price fluctuations. Let's take a quick look at them!

GBP – The United Kingdom is about to release some high-impact economic news in the London trading session, such as Halifax HPI m/m (7:30), Manufacturing Production m/m (8:30), and Goods Trade Balance (8:30). These events are significant to watch in order to capture opportunities on pound pairs. However, it may have a limited market impact, as the most important news is yet to come. Yes, I'm talking about the U.S. labor market figures, or more specifically, the NFP (Nonfarm payrolls).

CAD – Employment Change is due to be released at 12:30 (GMT), but with a strong negative forecast of 11.4k which is well below the previous figure of 54.5k. By the way, the employment change is different from the unemployment claims. It shows a change in the number of employed people during the previous month. Hence, the higher the figure, the better it is for Canada, and of course, the Canadian dollar. The Canadian unemployment rate will also be released at 12:30 (GMT) and is expected to remain at 6.6%.

GBP – The BOE Governor Carney is due to speak about the economic impact of climate change at the G20 Meetings in Hamburg. I don't expect his speech to impact the markets, though.

U.S. – The Fed's Monetary Policy Report is due at 15:00 (GMT) which provides a summary of discussions of the conduct of monetary policy and economic developments and prospects for the future. The market knows about the U.S. Federal Reserve's plans. Therefore, a neutral report isn't expected to move the markets.

U.S. – Here comes the big event, the NFP report, which is scheduled to be released at 12:30 (GMT) with a positive forecast of 175k, higher than 138k (previous). Moreover, the unemployment rate is expected to remain unchanged at 4.3%.

Forex junkies are anxiously waiting for the Non-farm payroll as it's one of the macroeconomic events which can significantly shake the markets. It shows a change in the number of employed people during the previous month, excluding the farming industry.

Now the question is, whether it's likely to be positive or negative. Well, only time will tell. I will try to share detailed insights about the NFP in our live market updates, so stay tuned.

The global financial markets are likely to be highly volatile during the release of multiple economic news events. Gold is no exception and is expected to be volatile as well. During the past few days, this precious metal hasn't moved much and has consolidated in a trading range of $1217 – $1227. This consolidation occurred despite the renewed geopolitical tension between North Korea and the United States resulting from North Korea's most recent missile test just a few days before leaders from the Group of 20 nations are scheduled to address steps to halt North Korea’s weapon programs. The G20 Meeting starts today, although the time is not yet specified.

Gold gained a slight bid on the back of the ADP non-farm employment change readings as it fell short of the forecast. It published a 158K rise in hiring versus the forecast of 184K gain in June. To make it worse, they also revised the previous ADP figure from 253K to 230K, indicating that we may see negative revisions for previous NFP figures.

Today, if you want to trade gold, I would suggest keeping a close eye on $1217, the crucial trading level. 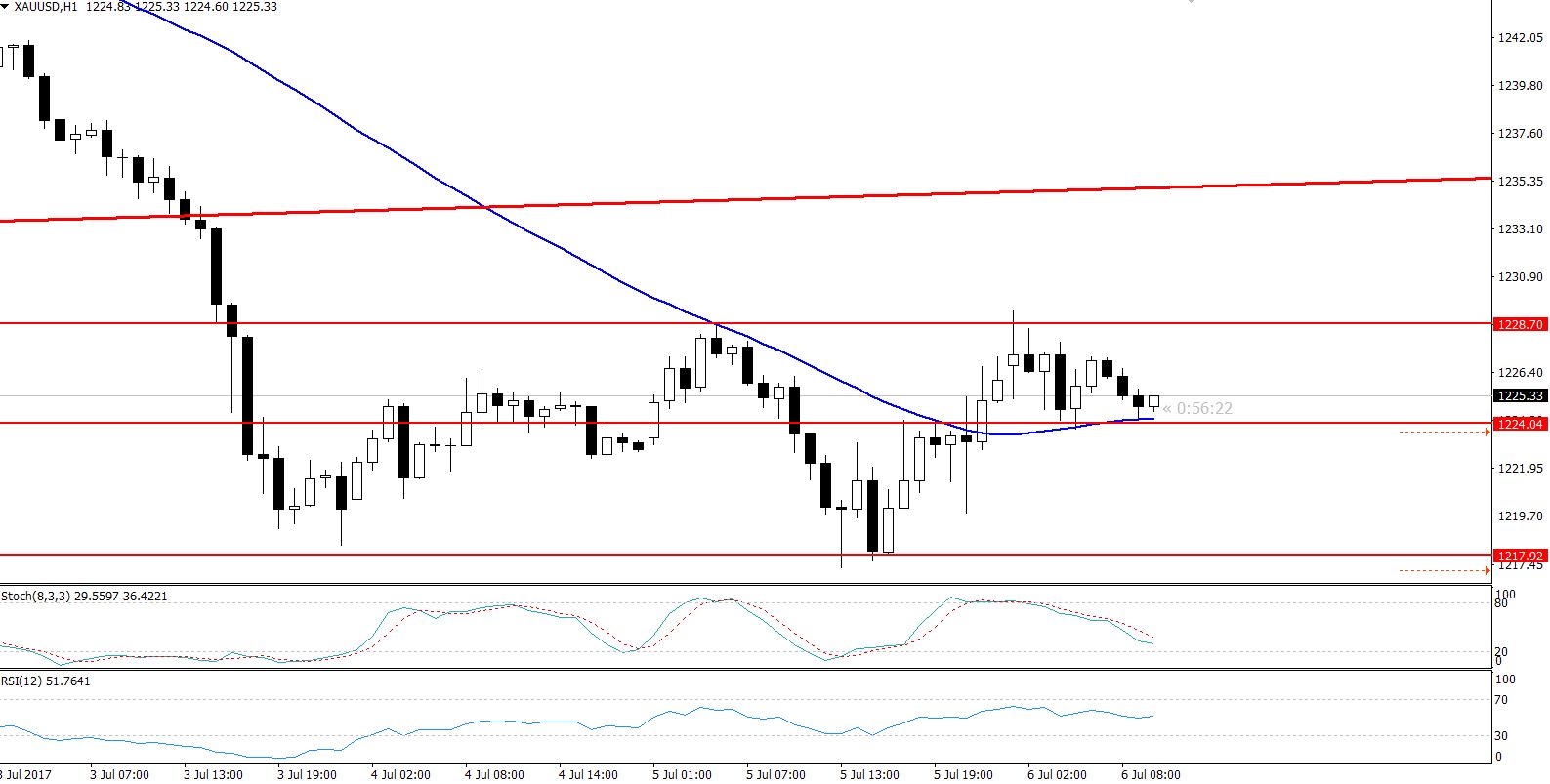 Gold prices are trading below the 20- & 50-period moving averages, which indicates a bearish investor bias. Aside from this, the RSI has come out of the oversold region but is still trading below 50, which is another bearish signal for us. To understand this thoroughly, take a look at our amazing moving average trading strategy.

On the daily chart, we can see a breakout of a bullish channel which now is extending a solid resistance at $1235.

The traders across the borders are sitting tight ahead of major economic releases today, particularly, the ones in the U.S. trading session. The best instruments to trade are gold, EUR/USD, USD/JPY, USD/CAD, and AUD/USD, along with U.S. indices as they usually have major movements. If you want to trade gold profitably, I highly suggest you check out our article on Gold trading.