Yesterday I hypothesized about a possible USD reversal after a long downtrend. Today that hypothesis looks more like a reality as the USD makes another leg higher against all major currencies. There were signs (there are always signs) that the reverse was coming and today those signals look even stronger.

3 Signs That A Reverse Is Happening For the USD

This forex pair tried the downside again a few times yesterday, but it failed to break below the massive support level at 108 or even manage to reach it. That was a sign that USD/JPY buyers had put up a fence around 108 and they weren’t going to let go easily.

What doesn’t go down in forex must eventually move higher and that´s what happened. The thing is that it has gone up pretty fast, which is another signal in itself that the downtrend is now over.

EUR/USD Failure to Close Above 1.20

1.20 is the line in the sand for EUR/USD. It looked for a moment like that level was broken when buyers pushed the price above it for a few hours yesterday without much resistance.

As I said yesterday, that´s how these big levels work. Big cats push above/below strong support/resistance levels to see if there are any weak stops to be triggered, before reversing back down. That makes yesterday’s move a fakeout. Today this forex pair has pushed around 50 pips lower so it looks like the reverse is happening for real. Although, I must stress that the 20 exponential moving average (grey) on the daily chart must be broken for the downtrend to continue. 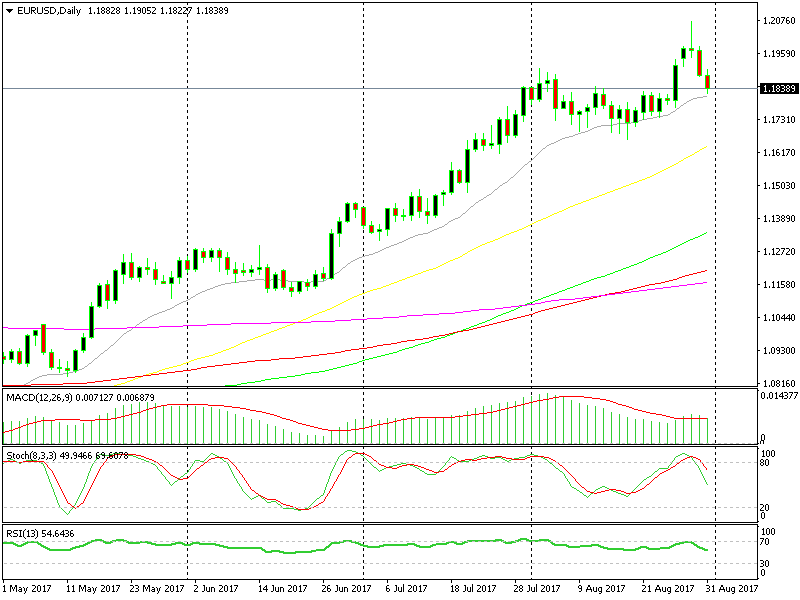 Gold Back In Range

On Monday, gold broke above a long term resistance at around $1,308. Nothing was happening in forex on Monday, which made that jump in gold a strong signal that the Buck was going to fail soon.

It didn’t take long, the USD lost around 100 pips the next day. As we know now, the USD has claimed back those losses and then some. Gold held up well over the next few days, but today we see that the price has dived back below the resistance level. Now, this is another signal, but in the opposite direction. So, that makes it 3 signals/signs that the USD is reversing the 8-month downtrend. 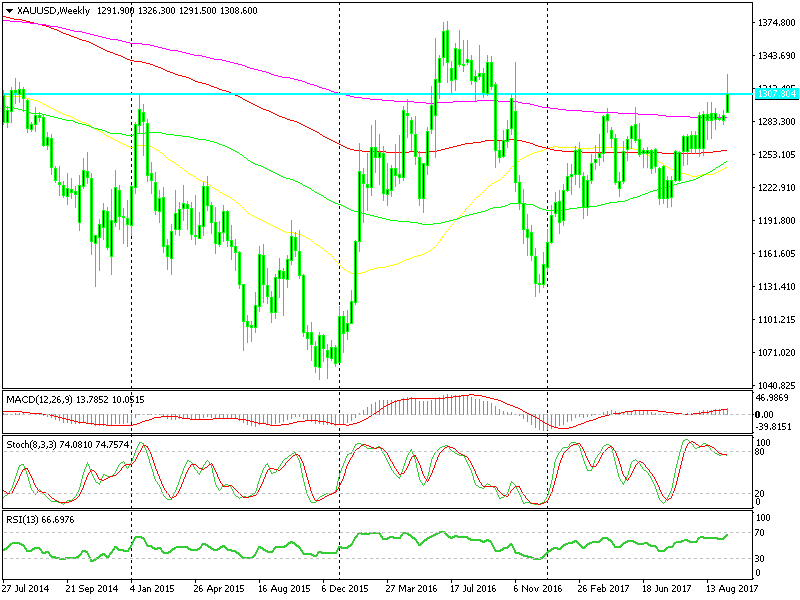 Gold has dived back below resistance

The Canadian Dollar has been in a strong uptrend over the last few months, gaining around 14 cents during this time, which means that USD/CAD has lost 14 cents. That was quite a run, so a retrace lower (higher in USD/CAD) was overdue. The retrace finally happened this week.

Yet, buyers couldn’t push above the last swing higher which took place earlier this month. It was a sign that the push higher wasn’t really a reverse, but more of a retrace/pullback.

Now we just received the Canadian GDP report and it was yet another great fundamental report coming from the Canadian economy. That puts the CAD back on the uptrend and USD/CAD on the downtrend.

After all these factors, I do think that the USD has formed a base and is now fighting its way back up. There are some technical indicators and levels which need to be taken out so the reverse can pick up the pace, such as the 1.18 level in UR/USD and the 111 level in USD/JPY. Although, I wouldn’t go long USD/CAD because the fundamentals are in favor of the Canadian Dollar.