Bitcoin Is Stealing the Show in Cryptocurrencies. Now the $5,000 Resistance Level Turns Support

Damn, Bitcoin has really taken off today. I had a buy position in this digital coin, but I closed it when the price was around $4,900, just ahead of the big resistance level which was an all-time high as well.

But a few hours ago, the big level was broken and Bitcoin hasn’t looked back since. The climb has been epic so far today; this coin has climbed more than $300 and it pierced the $5,200 level a few times.

Cryptocurrencies usually move as a whole, but apart from Bitcoin, the rest are not doing much. Ethereum is a bit better off, but its performance is nowhere near that of Bitcoin. 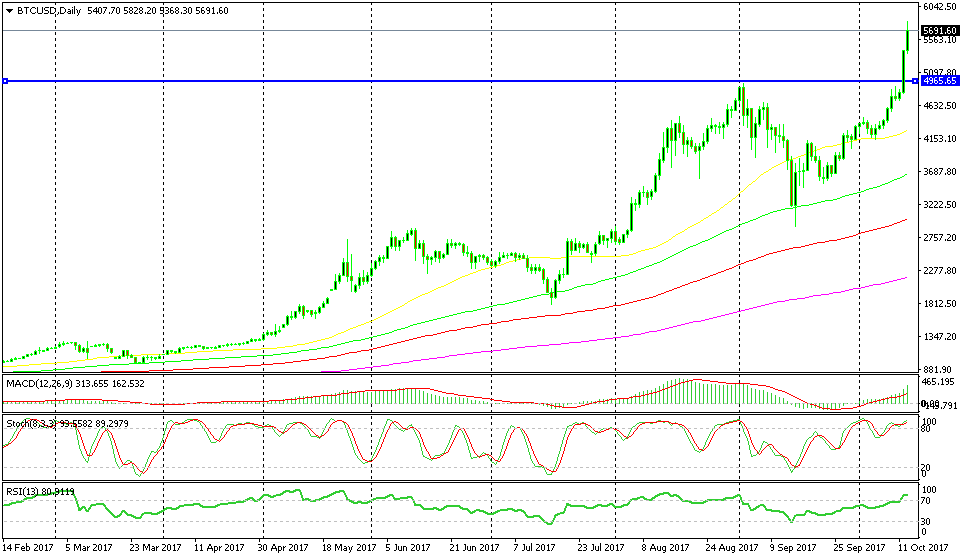 The $5,000 barrier is an important psychological level which will surely provide some support if the sellers try the downside.

I can’t see any reason for this massive jump in Bitcoin other than Jammie Dimon saying that he won’t talk about Bitcoin anymore. He has been predicting that Armageddon will come any day for Bitcoin but looks like he has given up. I bet he wishes he had bought some of these coins last year.

It looks like there is nothing that could stop Bitcoin. Well, we’re a bit late to enter this latest rally, but the plan is pretty simple. I will wait until Bitcoin retraces back down to the $5,000 level and then open a long-term trade after observing the price action, just in case we don’t get on a deep pullback lower.