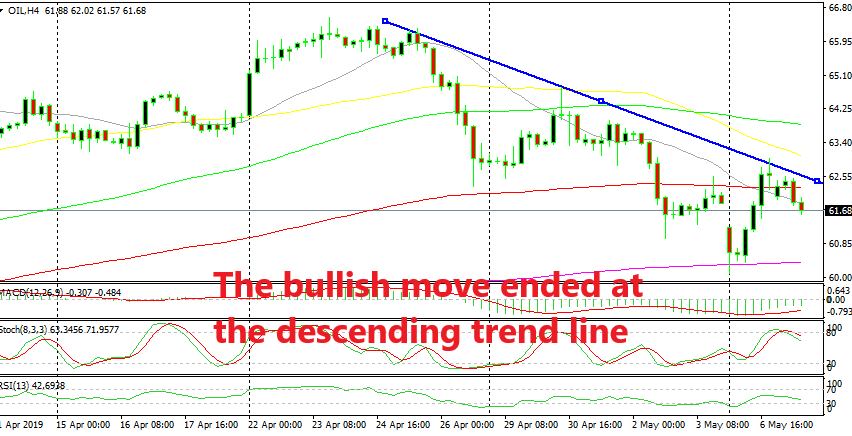 The downtrend remains in place for US WTI crude Oil

Crude Oil opened the week with a bearish gap lower after the trade tensions between China and the US aggravated once again following Trump’s tweet over the weekend for higher tariffs on China. That hurt the sentiment in financial markets and, as a result, risk assets such as Crude Oil opened lower and continued to decline in the first few hours of trading.

But we see on the H4 WTI Oil chart that US crude found support at the 200 SMA purple. The price formed a small doji above that moving average which is a reversing signal and the price reversed and climbed nearly $3 higher. The 200 SMA stands just above $60 which is a big round number, so there’s a possibility that the area down there might turn into strong support.

The buyers pushed above the 100 SMA (red) yesterday in the evening, but the price formed another doji at the top, this time signalling a bearish reversal. So, it seems that the climb ended right there, at the descending trend line. The stochastic indicator was also overbought which meant that the bullish move was over and the reverse has already started.

The downtrend is back in place and sellers should reach the support at $60 in the next few sessions, but it remains to be seen whether they can break the support and the 200 SMA down there.