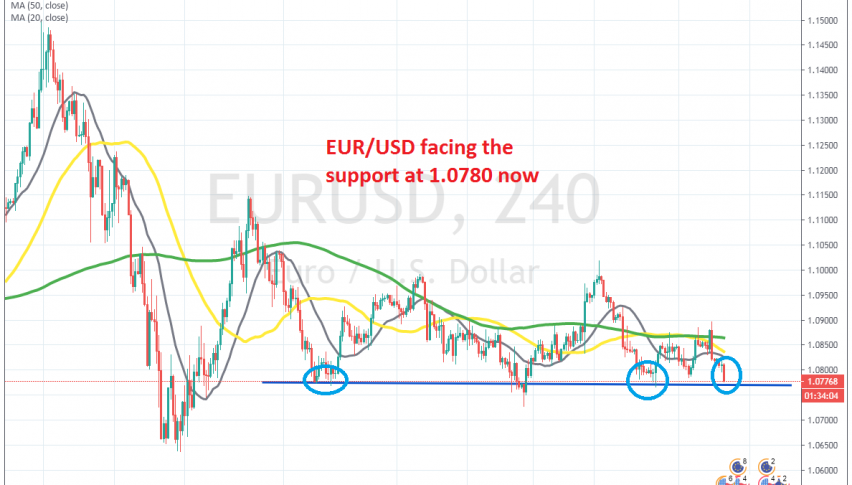 Let's see if sellers will break the support today

EUR/USD has been trading on a bearish trend since two years ago, when it reversed down from above 1.25. Since then, the pressure has been on the downside, although in recent months we have seen several attempts from buyers, trying to turn this pair bullish.

In late February, we saw a major bounce as coronavirus broke out in Italy, which should have sent this pair down, but EUR/USD surged more than 7 cents higher, to 1.15 until March 10. The pullback ended right at that big round level and reversed down as markets turned into the USD, which was just as swift.

Towards the end of March we saw another pullback higher worth around 5 cents, but the bullish move ended and back down we went. This sort of price action has been going on for the last several months, with buyers trying to turn EUR/USD bullish, only to give up later and give way for sellers. Highs have been getting lower, as the H4 chart shows, so the pressure remains on the downside.

We have opened some sell forex signals in this pair during this time, but EUR/USD faces a support zone around the 1.0780 level now. If this support level gets broken, then we will be heading for 1.0650s. Although, I wouldn’t sell the breakout right away, rather I would wait for a retrace back up to this support level after it is broken. If it holds, then we’re good to go short. But, let’s wait and see the price action until then.