Daily Brief, October 26 – Everything you Need to Know about Gold on Monday! - Forex News by FX Leaders 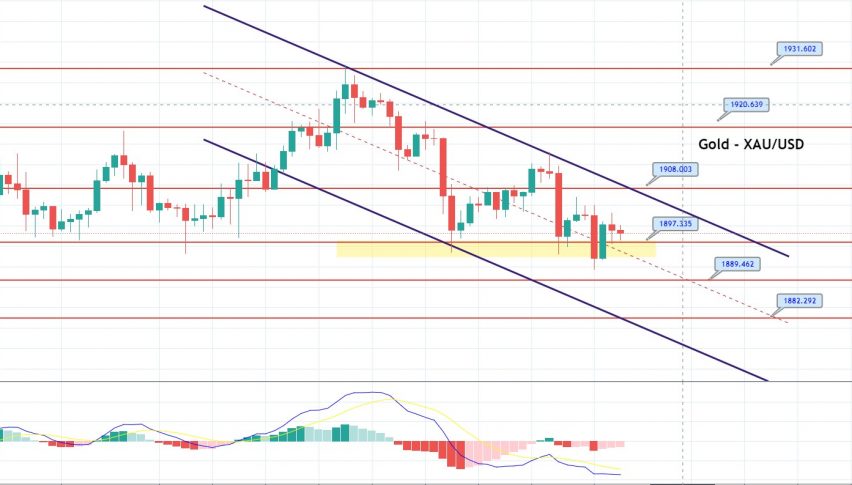 Daily Brief, October 26 – Everything you Need to Know about Gold on Monday!

Good morning traders,
Prices for the precious metal, gold, closed at 1,901.47, after placing a high of 1,014.21, and a low of 1,894.26. Overall, gold prices moved in a bearish trend, but remained consolidated throughout the day. The prices for the yellow metal fell on Friday, as the US dollar became strong after the White House and the US Congress hit the pause button on the coronavirus stimulus drama. They suggested that a major relief bill will only be passed after the November 3 US Presidential election.

The White House officials, including Chief of Staff Mark Meadows and Press Secretary, Kayleigh McEnany, said that negotiations with the Speaker of the opposition-led Congress, Nancy Pelosi, for a US stimulus relief bill, had ended after two weeks of inconclusive talks.

US Treasury Secretary Steven Mnuchin also confirmed that significant differences remained between the two parties, regarding the size of the COVID-19 relief bill.

Apart from US stimulus measure, gold was under pressure, due to the strong dollar, as President Donald Trump and the Democratic candidate Joe Biden stated their cases in their final presidential debate before the November 3 presidential election.

On the data front, the Flash manufacturing PMI figures from the US were in line with the anticipated 53.3. The Flash Services PMI figures released at 18:45 GMT, showed an increase to 56.0, against the projected 54.7, supporting the US dollar.

The advanced or expanded services activities in the US during October depicted better economic conditions and supported the local currency, the US dollar, ultimately weighing on gold prices on Friday.

Another reason for the declining gold prices on Friday was the statement from the World Health Organization that the WHO was looking at ten vaccines in Phase 3 trials, as the northern hemisphere was fighting the second spike in coronavirus cases.

The chief scientist, Dr Soumya Swaminathan, said that the WHO expects to receive results of trials from one or two vaccine candidates before the end of the year, possibly in late November. This statement raised the risk sentiment in the market and weighed on the safe-haven yellow metal prices on Friday.

Meanwhile, the losses in the gold prices remained limited, consolidating on Friday, as the rising numbers of coronavirus cases all over the world caused more countries to tighten anti-coronavirus measures over the weekend.

France extended the curfew and Belgium brought in restrictions, as the numbers of new infections increased in many parts of the country. Furthermore, the World Health Organization also warned that an exponential rise in the numbers of infections was a threat to the health system’s ability to cope with the second wave of coronavirus cases.

Governments were struggling to balance new restrictions against the need to revive economies from the effects of previous lockdowns, that were imposed after the virus first emerged in Wuhan city. These uncertainties and concerns kept the yellow metal prices supported throughout the day.

The gold price fell dramatically during the open time in the Asian session, falling from 1,907 to 1,889. On the lower side, the violation of the 1,889 level could lead the XAU/USD price towards the next support area of 1,882, while on the higher side, the resistance remains at the 1,908 mark. The downward channel is keeping the bearish pressure on gold, especially with the resistance at 1,908. The MACD and RSI are in support of selling; therefore, we should keep an eye on the 1,909 level, as gold could stay bearish below this level today. Good luck!