Daily Brief, December 21 – Everything You Need to Know about Gold on Monday! - Forex News by FX Leaders 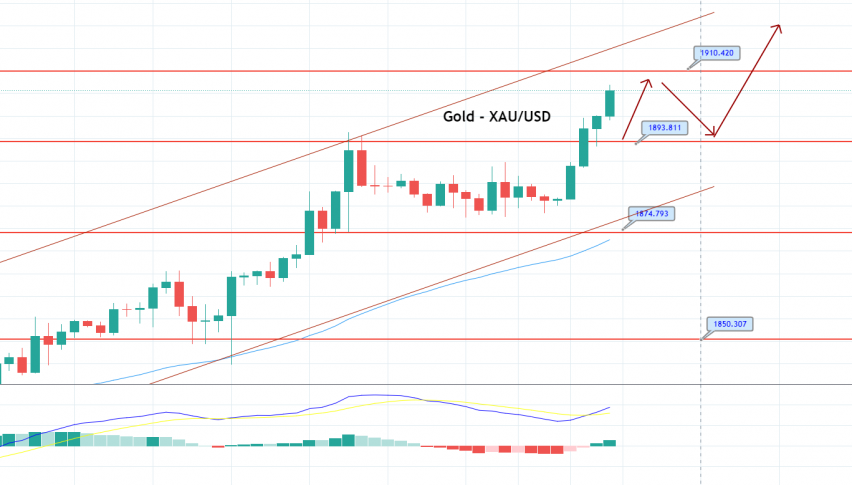 Daily Brief, December 21 – Everything You Need to Know about Gold on Monday!

The GOLD prices closed at 1,881.21, after placing a high of 1,889.54, and a low of 1,877.44. After rising for three consecutive days, the GOLD prices fell on Friday, as the US dollar made a  comeback. However, the yellow metal still managed to post gains for the third straight week, on the hopes that the US Congress will soon pass another coronavirus relief bill.

On Thursday, the US lawmakers scrambled to pass a coronavirus aid package, with both parties saying that failure to reach an agreement was no longer an option. The US dollar rose by 0.1% on Friday, weighing on the GOLD prices. Over the past few days, the risk appetite has been fueled by optimism that Congress will finally deliver the coronavirus relief bill. The increased risk appetite weighed on the safe-haven yellow metal on Friday. However, some investors closed their trades on Friday, before the weekend, in order to take profit, and this also weighed on the GOLD prices.

For the week, the GOLD future contract rose by 2.5%, making it the third straight week of gains. The gold prices rose by about 6%, to $ 108, within a period of three weeks, because of the rebounding US dollar. On the data front, at 20:00 GMT, the CB Leading Index for November idicated an increase to 0.6%, against the expected 0.4%, supporting the US dollar and putting pressure on the GOLD prices.

Meanwhile, on Friday, the Federal Reserve Board Governor, Lael Brainard, laid out a case for the US Central Bank to take climate change risks into account as part of its financial stability writ. Brainard’s comments were aimed at some of the Republican lawmakers who think that doing so would be ill-advised.

She said that the Federal Reserve had made important progress in laying the groundwork for the incorporation of climate considerations into the material, relevant to statutory responsibilities. The Fed showed its readiness, this week, to use its regulatory and research clout to mitigate global warming effects on the financial system, by joining an international group of central banks that are focused on climate change risks.

Furthermore, the losses in the yellow metal remained limited, as the relationship between the world’s two largest economies came under fresh pressure during the week. The US government slapped harsh restrictions on the Semiconductor Manufacturing International Corporation (SMIC), as the Trump administration continued to pressurize Chinese firms during its final weeks.

Moreover, China’s military accused the United States of jeopardizing peace and stability in the Taiwan Strait by sending a guided-missile destroyer through the waterway on Saturday. These developments have limited the losses in the GOLD prices.

Trading in GOLD is sharply bullish at the 1,902 level, having crossed over the 1,893 resistance level. The metal has already violated the double top resistance level of 1,893, and this could drive a further buying trend until the next target level of 1,910 level. Recently, the XAU/USD has formed three white soldiers on the 2-hour timeframe, suggesting chances of a buying trend in GOLD. Thus, we can expect gold to gain support over 1,893, and resistance at the 1,910 level today. Good luck!