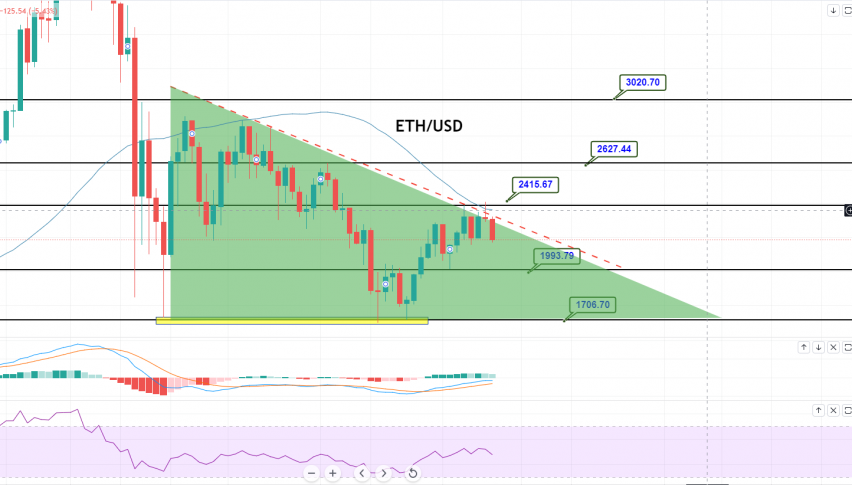 The ETH/USD closed at $2,317.13, after placing a high of $2,396.83, and a low of $2,308.63. The ETH/USD rose during the first half of the trading session on Wednesday; however, it faced some pressure in the second half, losing its daily gains and turning red for the day, with minor declines.

Ethereum, which is the second-largest cryptocurrency, rose during the first half of the day on Wednesday, after analysts at Goldman Sachs said that ETH has the highest real use potential, and it could overtake Bitcoin as a store of value in the cryptocurrency space. Goldman Sachs predicted that Ethereum’s market capitalization could overtake Bitcoin’s market capitalization one day, as it has more real use cases than Bitcoin. The lower real use of  Bitcoin claimed by the investment bank is due to the slow transaction speed and high transaction fees.

ETH/USD
Furthermore, the bank also said that Bitcoin has a stronger brand and the first-move advantage; however, the high transaction fees and limited transactions per second keep the level of functionality of bitcoin lower than that of Ethereum. Currently, Bitcoin can handle around seven transactions per second, while Ethereum can handle 15 to 20 transactions per second.The analysts said that both cryptocurrencies are hedges to risk-on inflation; however, both fail to compete with gold, as the precious metal is still a defensive inflation hedge. The bank continued, saying that at this stage, the competition among different cryptocurrencies is another risk factor that is preventing them from becoming safe-haven assets. Meanwhile, US Congressman Barry Moore made a filing last week, declaring his purchases of cryptocurrencies. According to the filing, the congressman purchased Cardano, Dogecoin and Ether during May and June. Each purchase was worth between $1,001 and $15,000.

On the other hand, the US dollar, which is negatively correlated with the ETH/USD, remained vital for the day and kept the crypto under pressure. The ETH/USD then turned red during the late trading hours on Wednesday, when the US dollar started gathering strength against its rival currencies, after the release of the minutes of the FOMC meeting. The minutes revealed that the economy was still far from reaching the substantial further progress goal set by the central bank. When the goal set by the bank is met, the Fed will start easing economic stimulus measures. 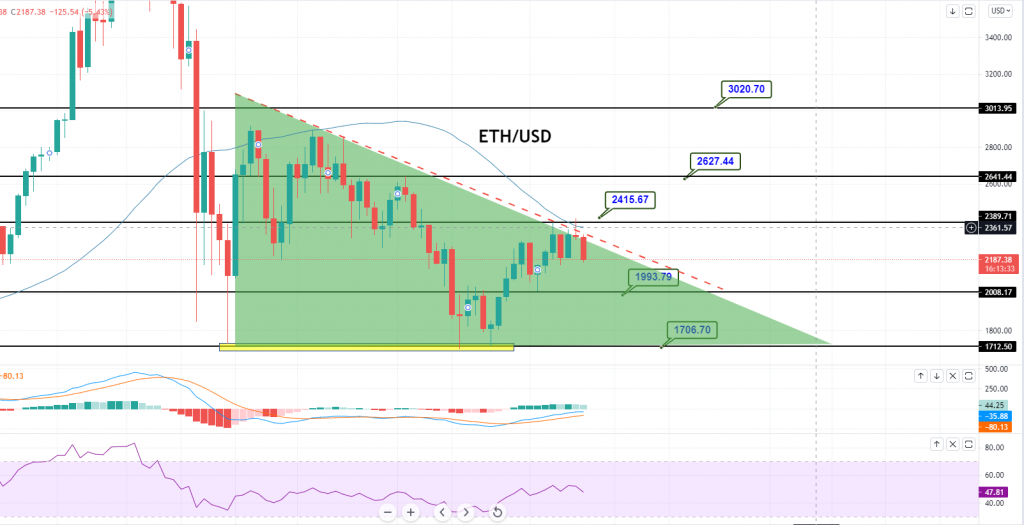 The ETH/USD coin is trading at 2,180, with a bearish bias, after facing rejection at the 2,415 resistance level. The ETH/USD coin failed to break over the 2,415 resistance level that was extended by a downward trendline on the daily timeframe. On the lower side, the ETH/USD pair is now likely to gain support at the 2,148 and 1,993 levels. The MACD and RSI are still holding in a buying zone, but they are significantly closer to entering a selling area. The coin has closed a Doji pattern below the downward trendline area of 2,415, suggesting strong odds of a selling bias in ETH. Let’s keep an eye on the 2,340 level to take a bearish trade until the 2,008 level today. Good luck!
Check out our free forex signals
Follow the top economic events on FX Leaders economic calendar
Trade better, discover more Forex Trading Strategies
Related Articles