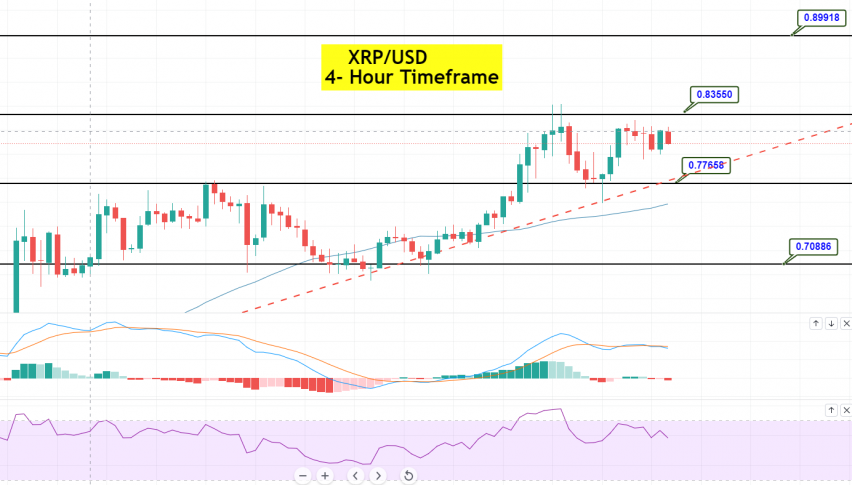 The XRP/USD coin has managed to extend its early-day gaining streak, rising to the 0.8156 level. It drew further bids well above the 0.81204 support level, even after the price of Ripple experienced a huge downfall. The bearish correction came as a result of the continuing lawsuit urged by the SEC. This lawsuit has thus far prevented the company from going public.

The XRP has had a dysfunctional year, due to its ongoing case with the SEC, which has dragged on, to the detriment of both parties. The price of XRP was expected to rise above the $2 mark this year, but unfortunately, the company has not been able to go public yet.

XRP/USD
Despite these negative actions, the mood in the Ripple company remains cool. It starts new projects and makes acquisitions to cement its place as the leading blockchain payment provider. XRP keeps pushing its services in Asia, having recently deployed its On-Demand Liquidity through RippleNet, allowing corporations to convert fiat into XRP and vice-versa.On the USD front, the broad-based US dollar managed to extend its upward rally of the previous session, drawing some fresh bids near multi-month highs on the day, as investors are positioning themselves for the US Federal Reserve to start asset tapering earlier than scheduled, thanks to the latest, better-than-expected US jobs report.

The upticks in the greenback kept the XRP/USD prices under pressure. The latest US jobs report, released on Friday, showed that non-farm payrolls grew by a better-than-expected 943,000. At the same time, the unemployment rate dropped to 5.4% in July.

On the 4-hour timeframe, the XRP/USD pair has formed an ascending triangle pattern that is likely to trigger a bullish breakout. If this happens, the buying trade will be worth capturing. The MACD and the RSI are tossing about between the buying and selling zones. However, the 50 periods simple moving average is there to provide support at 0.7585. Let’s look for a buying trade over the 0.7765 level today. Good luck!

Crypto Signals Brief for September 19: Ethereum Merge and Ripple Vs SEC Getting the Market Moving
3 months ago

Ripple Price Prediction: XRP Struggles Below $0.38, What to Expect
5 months ago