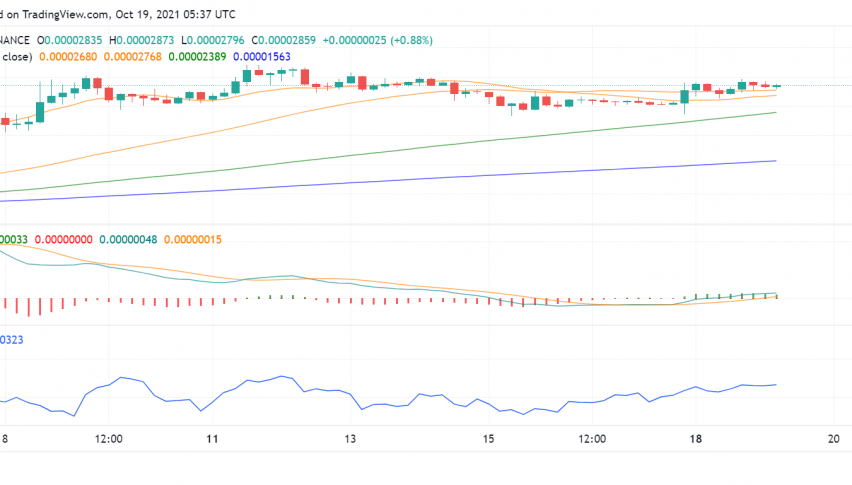 Shiba Inu (SHIB) is experiencing some cautious moves on Tuesday, possibly on the back of profit-taking by investors during the previous session after failing to break the key $0.000030 level. At the time of writing, SHIB/USDT is trading around $0.0000028.

Although the second most popular memecoin and potential Dogecoin killer is seeing some weakness in terms of price action at the moment, it could just be temporary as its social engagement remains extremely high. Ever since Musk tweeted a photo of his pet Shiba Inu a few weeks back, buyers have been jumping back into the meme tokens’ market, contributing to a reversal in sentiment towards SHIB.

Can SHIB Head to the Moon?

The Shiba Inu coin received another boost at the beginning of this week after Musk shared another tweet which suggests his interest in ‘taking SHIB to the moon’. This has caused the memecoin’s online community to rally support for the crypto and keep its price supported, with several social media users trying to gain support to bring its price up to one penny ($0.01).

On the fundamentals front, Shiba Inu could gain some traction upwards from the news about crypto payments gateway NOWPayments adding support to the SHIB token and its burn. NOWPayments has announced that it will burn 3% of the profits from all SHIB transactions, which can drive the price of the token higher. In addition, the gateway plans to add support for other tokens from the Shiba Inu ecosystem as well – LEASH and BONE, allowing users to buy goods from leading eCommerce websites using these tokens.

The increasing size of the Shiba Inu community is evident from an ongoing petition to get its native token SHIB listed on leading fintech platform Robinhood. More than 266k users have already signed the online petitio to have SHIB listed on the app which atttributes a significant portion of its recent success to the original memecoin Dogecoin.

On the 4-hour price chart of SHIB/USDT, moving averages as well as leading technical indicators MACD and momentum are exhibiting a strong bullish bias. This suggests we can expect more upside in the token in the near term.

Shiba Inu’s price is holding above the pivot point at $0.000027 and can continue its climb higher on the back of increased buying pressure. The next level to watch is the immediate resistance at $0.000032.

Ethereum Slips Under $2,000 - Upward Channel to Underpin ETH
38 mins ago