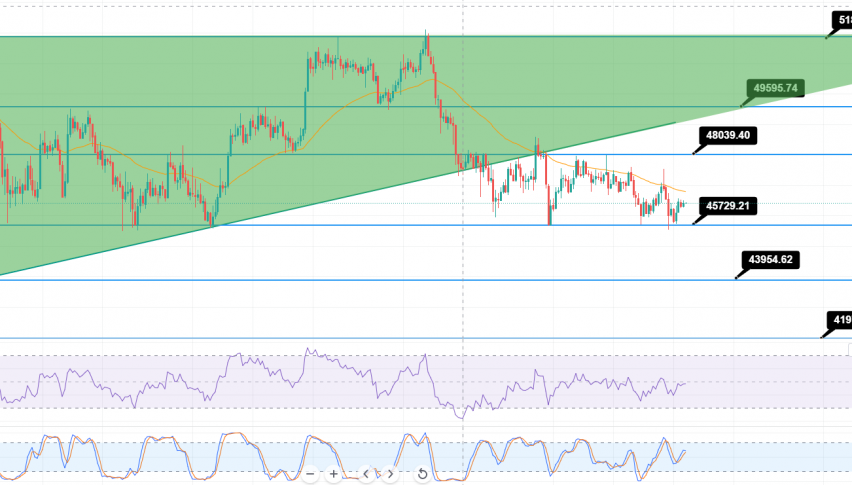 Bitcoin Steady at Key Support, What Could Trigger Solid Recovery?

BTC/USD ended the day at $45,830.0, having reached a top of $47,546.0 and a low of $45,583.0. BTC/USD fell for the third day in a row, sliding for another session under the existing negative momentum. According to recent reports, the government of Kosovo has prohibited Bitcoin mining and all other cryptos. The decision to prohibit crypto mining was made in order to preserve electricity. Kosovo presently imports more than 40% of its energy, and lignite, which emits poisonous chemicals into the atmosphere, accounts for 90% of its energy production. Last year, the government declared a state of emergency for 60 days to allow funding to be reallocated to energy imports.

The news that Kosovo has joined China in prohibiting crypto mining added to the bearish pressure on BTC/USD and pulled its prices down. China has outlawed cryptocurrency mining in order to achieve the government’s aim of becoming carbon neutral by 2060. According to estimations, BTC mining emits 22 to 22.9 million metric tons of CO2 per year. Renewable energy is prohibitively expensive, and carbon emissions will continue to climb. This spurred China to prohibit cryptocurrency mining, and now Kosovo has followed suit, adding weight on BTC/USD values.

Furthermore, the recent law introduced by Peruvian politicians to control cryptocurrencies could be contributed to the decline in BTC/USD pricing. According to the bill, Bitcoin is an asset with a book value that can be used as a capital asset when forming a company. The bill’s goal is to provide a regulatory framework for Bitcoin and other cryptocurrencies. It was presented to Congress in December and is now awaiting debate.

Peru is one of the four Latin American countries with the highest adoption of Bitcoin and other cryptocurrencies. The country is prepared to host a debate in parliament on the merits and risks of cryptocurrency trading in the coming weeks. The announcement that Peru may discuss cryptocurrency legislation put downward pressure on BTC/USD and pulled it lower.

Increased strength of the greenback, along with increased fears about global economic recovery in the event of the discovery of a new coronavirus variety, IHU, put pressure on BTC/USD, since the two have a negative correlation. The greenback was solid across the board due to its safe-haven character, as it received inflows when risk appetite faded in the market.