SNB Is Doing the Talk – Will Our EUR/CHF Signals Do the Walk? - Forex News by FX Leaders

SNB Is Doing the Talk – Will Our EUR/CHF Signals Do the Walk?

On Monday we opened a buy long term forex signal in EUR/CHF when this forex pair was around 1.0720-30. It was the week after the elections, so the forex market had already figured out the future for the USD and the safe haven currencies.

After last Wednesday´s epic reversal following the US elections, it became evident that the market sentiment turned completely positive after a moment of panic. That opinion was reinforced this week as the US advanced and the safe haven currencies of JPY and CHF kept retreating.

We made some good pips during this risk-on sentiment, but USD/CHF and USD/JPY have gotten too far now to get on the long train. So, instead of chasing the price in these two forex pairs, we decided to go long on EUR/CHF. It slipped from 1.10 to 1.07 in the last 6-7 weeks, so the risk/reward ratio was tempting.

With the pace of the decline in the safe haven currencies, a 200 pip jump wouldn´t be too exaggerated but the problem is that the Euro is suffering as well in this risk-on environment. This has slowed down the advancement of the Euro in this forex pair. 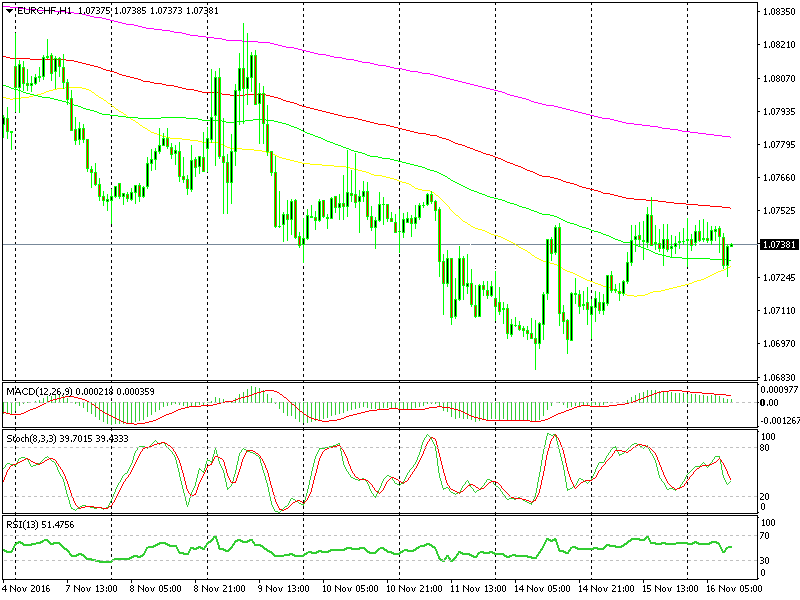 Moving above the 50 and 100 SMAs is the first step in the right direction.

The SBN vice president, Zurbruegg, is on the wires now though and he´s talking money to my ears. He´s trying to make it clear that intervention in the FX market by the SNB (Swiss National Bank) is and will be the norm for many years. I think these guys might have been on the bid around the 1.07 level, give or take 20 pips, because EUR/CHF has been jumping whenever it got close to this price.

He said that intervention has become necessary after the 2008 GFC (global financial crisis) and that the SNB will do whatever it takes to keep the price stability. These sound pretty good to us since we already have two open EUR/CHF signals: a long and a short term.

The price jumped about 15 pips on the comments, but I think it´s going to take some time for these two trades to develop because this is not exactly the fastest moving pair. Patience is always a virtue in forex.

Check out our free forex signals
Follow the top economic events on FX Leaders economic calendar
Trade better, discover more Forex Trading Strategies
Related Articles
AUD/USD Facing A Big Test at the 20 Weekly SMA
AUD/USD has been bullish since early October although buyers are having trouble pushing the price above the 200 weekly SMA
2 days ago