Starting the Day on the Right Foot (GBP/USD)

Yesterday we had two successful forex signals: a buy EUR/CHF signal, which we had opened about two weeks ago when this forex pair was having another go at the 1.07 support level, and another one in GBP/USD, which we closed manually for a 19 pip profit.

We opened two more forex signal yesterday. After the EUR/CHF signal was closed early in the morning, we opened an AUD/USD signal since our exposure was reduced when we were left with one forex signal open. I don´t like to have too many forex trades open at the same time so two short term signals are enough for my risk appetite.

I was putting my trust on the 100 smooth moving average (100 SMA) and the stochastic indicator on the H1 forex chart since this indicator was heavily overbought. However, AUD/USD buyers had other ideas and they pushed this forex pair another 20-25 pips higher overnight. It has reversed now and the price is around the opening levels.

Later on, the GBP/USD signal was closed so we opened another one in the evening when this pair was having another go at the top. Well, the GBP sellers were reactivated a couple of hours ago and they took this pair back down again, so our GBP/USD signal just hit the take profit target. 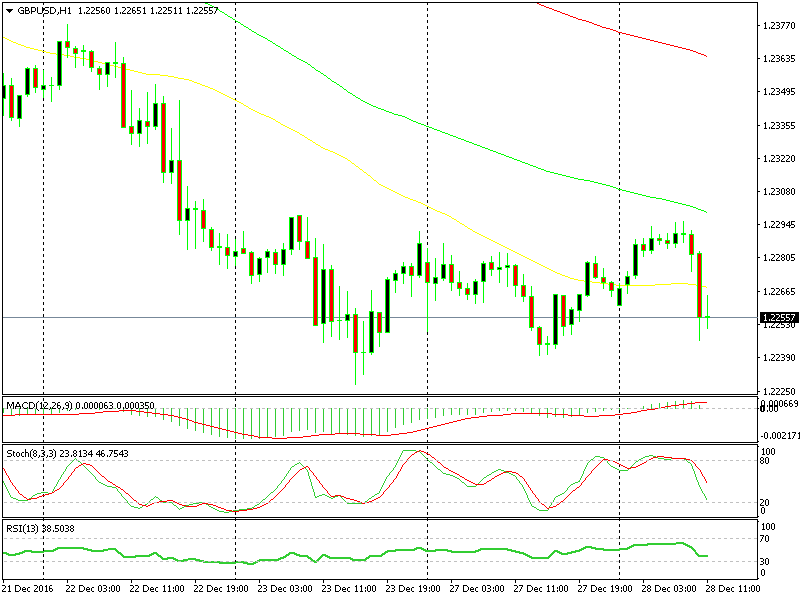 GBP/USD has giving us two winning signals so far this week.

It feels good having a winning forex signal as you start the workday and we hope to continue the same way as the day and week progress. By the way, some major forex pairs are making some half decent moves today, so we probably will have a little more activity in the forex market than in the past several days.

USD/JPY Bearish As the USD Retreats Lower
2 hours ago