Forex Signals Brief for September 4th: North Korea is Back in the Hotseat - Forex News by FX Leaders

Forex Signals Brief for September 4th: North Korea is Back in the Hotseat

Just when we thought we could put Kim Jong-un and North Korea behind us, it appears that the saga still has some unfinished business to attend to. Over the weekend, North Korea tested a hydrogen bomb which sent shockwaves through world markets, causing the safe-havens to rally. As markets settled in Asian trade, the gap began to close which is the same type of retracement that we’ve seen with the last few incidents.

As a result, I’m more interested in focusing on the fundamentals than on the news. There was a lot of anticipation going into Friday's nonfarm payroll number, however, it was the action that followed that was the real surprise. We saw a weaker than expected print of 156K, which led to the USD initially pushing lower along with equities. However, as the session progressed and the market digested the news (which was probably worse than the headline suggests), sentiment did a 180 and things turned bullish.

The USD and equities rally makes me think there is more upside to come with the US currency. When price action is strong in the face of weakness, that suggests there is an underlying level of strength. That USD strength will be my focus as we move into the trading week.

EUR – Spanish Unemployment Data is out at 07:00 GMT. Analysts are predicting a 16.3K increase, which is up from a 26.9K decrease in the previous period. Employment is one of the key drivers of the economy, given the importance of the Spanish economy to the Eurozone, this can impact the Euro.

GBP – Construction PMI for August is out at 8:30 GMT. Analysts are predicting a slight increase to 52.0 up from last month's reading of 51.9. This is an important number for the pound and a positive number will push the GBP higher.

USD and CAD – Markets have the Labor Day long weekend holiday so we can expect lower volume and a tighter range in Monday trade.

The Euro was one of the weakest performers on Friday after Bloomberg reported that the ECB may not want to make an announcement to unwind QE until October or December. This caused the EUR to tumble and it failed to regain its footing as the US session continued.

The EUR tumble, coupled with USD strength is telling me that in the short term the Euro might be a little weaker. Long term, I think we can’t argue with the decidedly bullish trend.. 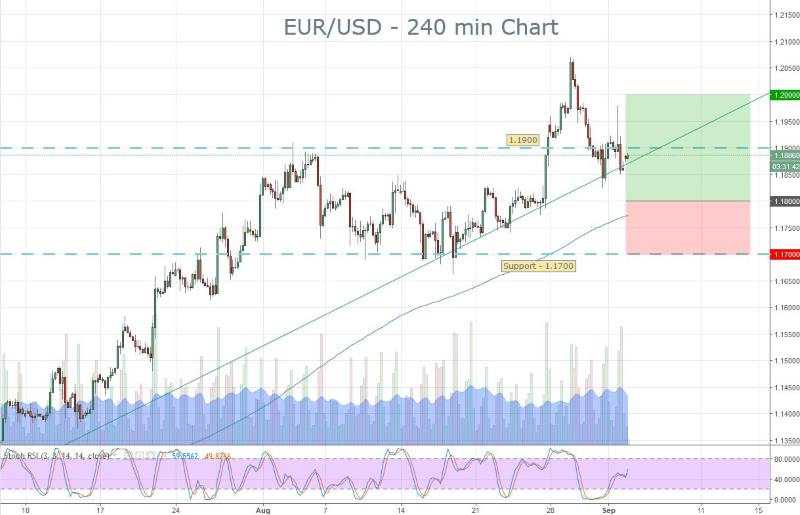 Short term I’m looking for a bit of a move lower. I expect USD strength to come back in once the North Korean saga settles down. I’m looking to buy below the 1.1800 mark. That suggests we get a bit of a sell-off short term followed by the longer term uptrend.

Be careful of any news related to the North Korean Saga which could have a negative impact on the USD. It’s also Labor Day in the US which might slow things down on Monday.

Unsurprisingly, when word of North Korea testing their military firepower hit the wires, the safe-havens jumped. Gold is always the go-to for a risk-off play and it gapped up right into the overhead resistance that I spoke about last week. 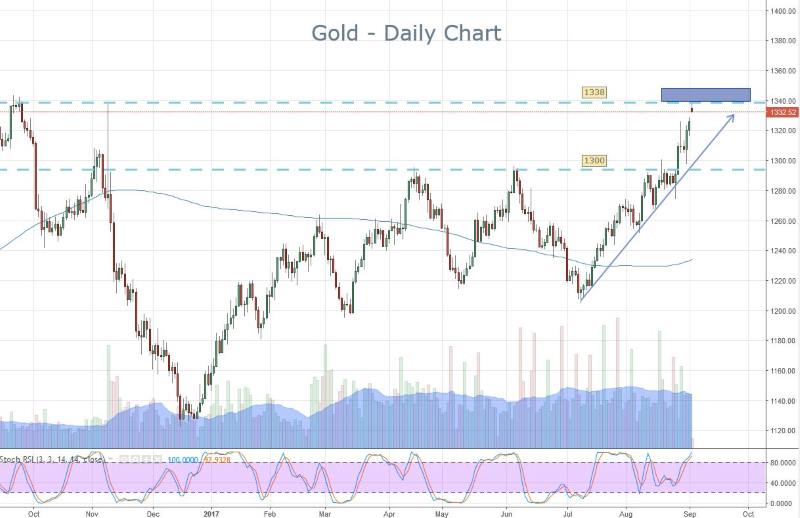 If we can hold above the 1338 level on the longer term charts then I’ll be looking to get long for a move to the next resistance level. However, below that point, I suspect the flight-to-safety type trade might blow off on Monday and I suspect we’ll retrace back to where we started.

The week has started off on a very active note, so here’s to hoping for another action packed week in FX markets.

Good luck in the markets, traders.