Kuroda thinking about hara-kiri as the JPY strength continues

The Japanese Yen is making additional gains today. USD/JPY has broken the major support level at 108 and that has made the folks at the Bank of Japan (BOJ) pretty nervous. Some of this bearish move in USD/JPY is coming from the USD side which is feeling pretty week today. The other markets today have been surprisingly quiet, unlike yesterday.

Yen Strength Is Raising Eyebrows at the BOJ

One of the main highlights in the financial markets today is the strength of the Japanese Yen. USD/JPY has been playing with the major support are which stretches from 108 to 109. This pair has jumped higher every time it slipped to this area.

But, in the last few days, the attempts were getting pretty often, so I felt that this level was going to go sooner or later. The high were getting lower too, which was another bearish signal.

Today, that level finally got broken to the downside and we are trading around the 10750 region at the moment. There is one last line in the sand though, which might offer some hope for USD/JPY buyers. That level comes at 107.30 and it was the low back in September last year.

Although, I wouldn’t count too much on that level. We might open a small buy signal hoping for a bounce, but we won’t play the reverse right now.

This is not a run for safe havens. Gold is higher but that’s on the back of some renewed USD weakness. EUR/CHF is little changed this morning while commodity Dollars are feeling quite upbeat. So, it’s not demand for safe haven assets which has sent USD/JPY lower.

That has the BOJ worried. Everyone wants a weak currency nowadays, especially the BOJ. The Japanese economy is lagging major developed economies and inflation in Japan still remains pretty weak, so a strong Yen is the last thing those poor guys want.

The currency Chief in Japan who also is the Deputy Finance Minister popped up a while ago and said that “they are watching closely whether the recent JPY appreciation is a speculative move”. Duh, what else could it be, we are not seeing an economic boom in Japan all of a sudden.
Whatever his words, the market is not taking notice. We have a trade plan for USD/JPY which we will explain below.

More Inflation in the UK, Higher Prices to Pay at the Local Store

Inflation doesn’t seem cool off in the UK. The headline number lost a decimal point last month while core inflation lost two decimal points. The BOE welcomed the slight decline, but this month we’re back at the highs again.

The GBP found some nice bids after the report was released, with GBP/USD gaining nearly 100 pips on the day. Although, the climb has stalled now as the USD decline has paused. So again, half of this move came from the USD side, which is 50 pips lower against the Euro as well.

I haven’t heard anything from the Bank of England (BOE) after the report, but I suppose they’re confused. Chairman Carney delivered some hawkish comments, but MPC member Haldane commented that there’s no rush to hike interest rates. That was confirmed by the BOE 0-9-0 vote to keep interest rates unchanged. The Pound is uncertain at the moment after the initial jump. 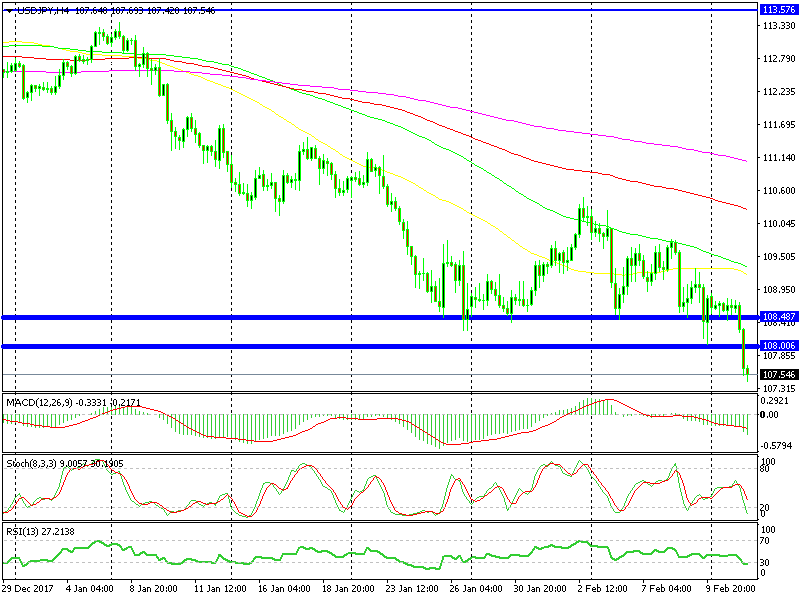 We wanted to buy at 108, now we are looking to sell at that level

So, the 108 support level was finally broken today. Now, the picture has turned even more bearish for USD/JPY. We could try a buy signal from 107.30, but the safest bet is going with the trend. The best trade would be to sell at 108.00 if the price pulls back up there. There’s the other level at 108.50, but it is a bit too far for now, so I’m looking at the 108 level for a sell signal.

The GBP enjoyed a nice run higher today, but the climb has stalled. GBP/USD is at some elevated levels now, so the buyers are reluctant, despite the positive inflation report. We have a long term sell signal here, so we hope the sellers return and the price heads back down.

Forex Signals Brief for May 4: US FOMC & Fed Fund Rate in Highlights
3 months ago