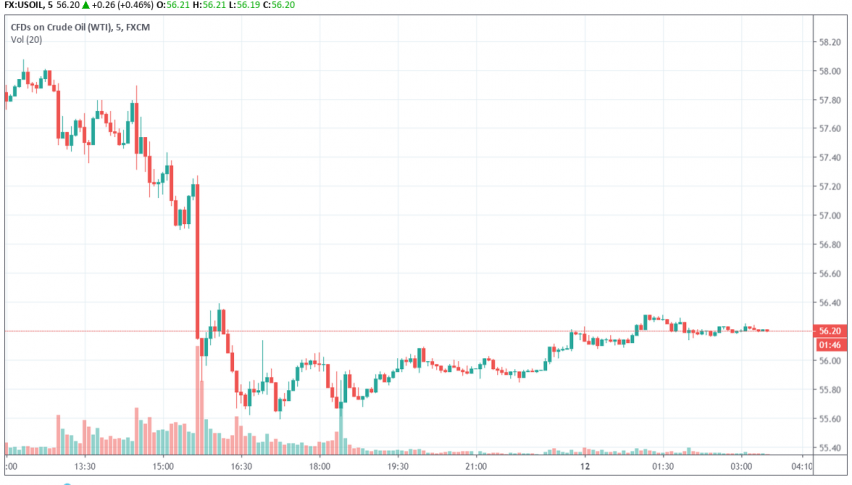 Early on Thursday, WTI crude oil continues to trade bullish over optimism on the trade war front and after the release of EIA’s crude inventories report. At the time of writing, WTI crude oil is trading at around $56.20 per barrel.

Crude oil has recovered its losses from the previous trading session on the back of latest developments in the US-China trade war. Earlier on Wednesday, China exempted 16 items from additional tariffs. Later in the day, in retaliation to the goodwill gesture by China, US President Donald Trump delayed proposed tariff hikes on Chinese imports worth billions of dollars.

Trade teams of the US and China are scheduled to meet in Washington during October to take negotiations forward, and these developments offer markets considerable hope that both sides are keen on reaching a trade deal.

Crude oil’s gains were also supported by the EIA report released on Wednesday which revealed that US crude stockpiles declined by 6.9 million barrels during the previous week to touch 416.1 million barrels, the lowest level since October 2018. Economists were expecting a decline of 2.7 million barrels. A higher than expected drawdown boosted the demand for oil and helped push prices higher.

Arslan Butt // Index & Commodity Analyst
Arslan Butt is our Lead Commodities and Indices Analyst. Arslan is a professional market analyst and day trader. He holds an MBA in Behavioral Finance and is working towards his Ph.D. Before joining FX Leaders Arslan served as a senior analyst in a major brokerage firm. Arslan is also an experienced instructor and public speaker.
Related Articles
Crude Oil Price Depressed Below $ 53 - Escalating Coronavirus Weighs!
During Monday's Asian trading session, the WTI crude oil failed to stop its previous session losses and remained depressed around just above
15 hours ago