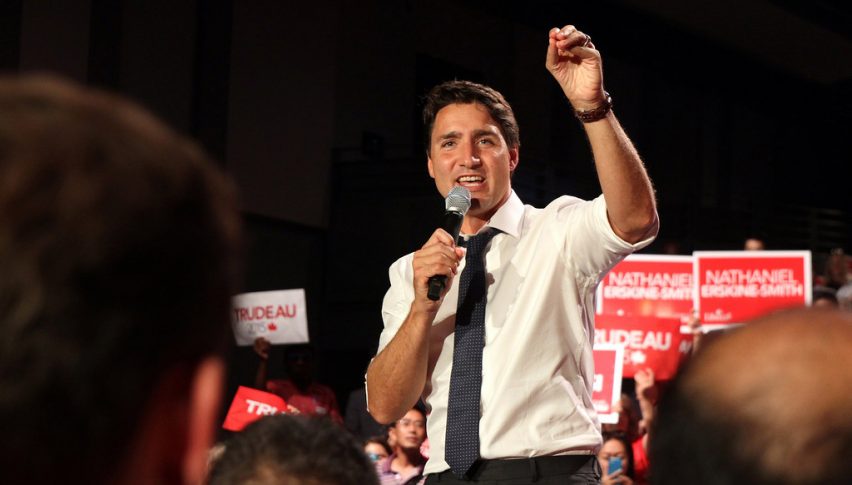 Canada’s Prime Minister Trudeau and his Liberals have a battle on their hands as the results of the election begin to filter through.

Currently, the expectation is that he will retain control, but the win appears to be hard-fought.

The USD/CAD will clearly be the focus today on the back of the result and we should know more as US markets open. The CAD has rallied sharply in recent days and since voting officially began has continued on that same trend. However, so far this morning price action has been relatively subdued as counting carries on and the polls close.

The election follows a wild week, where the UK and EU battled over a deal surrounding Brexit, before the failed attempt in the UK Parliament.

While at the same time, more hope of a US-China trade deal is also a political hot-bed at the moment and the positive commentary from US President Trump saw the SPX spike sharply.

Later today, we will get more Canadian data with retail sales for August, but we can expect all the action to come when there is an official decision one way or another surrounding the fate of Prime Minister Trudeau.

The FX Leaders Team had a quiet start to the trading week with 1 win from 1 signal.

The AUD/USD has spiked sharply overnight and this morning as risk-on is the order of the day on the back of Trump’s comments surrounding the US-China trade talks. However, there is a fair bit of good news priced in and a key resistance level above.

The EUR/USD has been trending higher after breaking out of the sharp downtrend that had been in place for an extended period. We are long and looking for another push higher.

BTC and the major coins have been stuck in sideways action of recent times and I suspect we won’t move far until we get some type of technical break.

Clearly, some type of fundamental catalyst would also do the job as well and that could force a break of this current range.

But as we know, this type of price action is not unexpected. Price moves from periods of high volatility to low volatility. This just happens to be a low volatility period.

Rowan Crosby // Asia-Pacific Analyst
Rowan Crosby is a professional futures trader from Sydney, Australia. Rowan has extensive experience trading commodities, bonds and equity futures in the Asian, European and US markets. Rowan holds a Bachelor of Finance and Economics degree and is focused heavily on Investment Finance and Quantitative Analysis.
Related Articles
Forex & Commodities Key Trading Levels to Watch This Week
The U.S. dollar remained weak across the board on the back of increased US –Sino tensions and risk-on market sentiment. For being the safe-h
15 hours ago

Forex Signals Brief for May 27: Risk is Back on the Table
20 hours ago