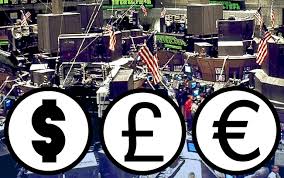 The past week exhibited extreme volatility after a series of updates on the US and China trade war. The dollar surged to a three-week peak on Friday, accepting some safe-haven demand, as risk desire for higher-yielding currencies declined with risks about the reversing of existing tariffs, a significant element of a preliminary US-China trade agreement.

The US President Donald Trump increased the level of risk and uncertainty by stating he had not consented to turn back tariffs. His comments came a day after US and Chinese officials reportedly agreed to roll back tariffs on each others’ goods in a “phase one” trade agreement if it is completed.

Most of the European and US banks will be closed in observance of Veterans Day. However, the British economy is scheduled to release GDP and manufacturing production figures.

Especially after the downbeat inflationary assessment by Mark Carney & team, we can expect a drop in GDP. The Sterling is under heavy selling pressure as the BOE Governor Mark Carney hasn’t said much about the next rate hike. The rate hike sentiments are falling apart, causing bearishness in the Pound. By the way, a slight divergence in the data can cause a considerable movement in the Cable.

Alongside this, the Office for National Statistics is also due to release manufacturing production numbers. Economists are expecting a drop in production by -0.2% vs. -0.7%. It looks like the Sterling is going to face bearish pressure on Monday in the wake of adverse economic events.

The UK’s Office for National Statistics reported 3.8% average earnings in October, whereas economists are expecting it to remain same at 3.8%
this month.

The Claimant Count Change for May revealed an extension of 24.7k, but May figures seem to get better as economists are expecting jobless claims of 12.3k, which is way lower than 24.7k. It means fewer people have claimed to be unemployed, which may also improve the unemployment rate and, ultimately, the British Pound.

Lately, the US Federal Reserve Chairman Jerome Powell emphasized that recent weakness in inflation has been temporary — and the surge of core CPI to 2.1% in October supports his words.

However, the inflation figures for November may pose additional hurdles for the Federal Reserve. Headline CPI increased by 0% m/m in October and Core CPI by 0.1% while a rise of 0.3% in CPI and 0.2% in Core CPI is on the cards this week.

Fed Chair Powell Testifies – 15:00 GMT
The Federal Reserve is due to testify on the economy before the House Budget Committee in Washington DC at 15:00 GMT. Investors will tune in for any signs on monetary policy, as Powell is expected to be questioned on the fresh rate decreases and the subsequent ‘pause’ his central bank published.

For all the new members, retail sales are a primary gauge of consumer spending, which accounts for the majority of overall economic activity. In October, retail sales fell by -0.1% vs. the forecast of 0.2%%.

This month, economists are expecting a 0.1% rise in retail sales and a 0.3% rise in core retail sales. A higher number of sales indicate higher inflation and a growing economy. Therefore, the positive data will be good for the greenback.

Arslan Butt // Index & Commodity Analyst
Arslan Butt is our Lead Commodities and Indices Analyst. Arslan is a professional market analyst and day trader. He holds an MBA in Behavioral Finance and is working towards his Ph.D. Before joining FX Leaders Arslan served as a senior analyst in a major brokerage firm. Arslan is also an experienced instructor and public speaker.
Related Articles
Hard Brexit Comments From Merkel Should Keep GBP Bearish
Merkel is hinting about a hard Brexit, which has turned the GBP bearish
3 mins ago