This Week Has Brought Whipsaw Conditions To The EUR/USD.

Donald Trump announced closing travel to Europe last night, which turned the sentiment even more negative today, especially for European stock markets. They opened with yet another bearish gap lower and in total, the German index Dax30 has lost around 1,000 points today, as the decline continued in the European session after the bearish gap. Treasury yields also stayed pressured for the most part, with 10-year yields down by over 15 bps, but that did not stop the dollar this time around from posting gains today.

The decline in Gold and the climb in USD/JPY give you the idea that the sentiment must have improved, but that’s not the case, since stock markets and commodity currencies continue to decline. It is more of a case of the USD, which has been gaining ground, after suffering considerable losses in the last two weeks, especially against the Euro. The ECB didn’t cut repo/deposit today as almost all other major central banks have done, but they will increase the stimulus package, but I don’t think money will make people go to work when governments are enforcing a complete shut-down, with good reason. The only way is quarantining the whole country (any country) in their homes for about a month or two, until the virus dies out and then get on with the economy, after the disaster. 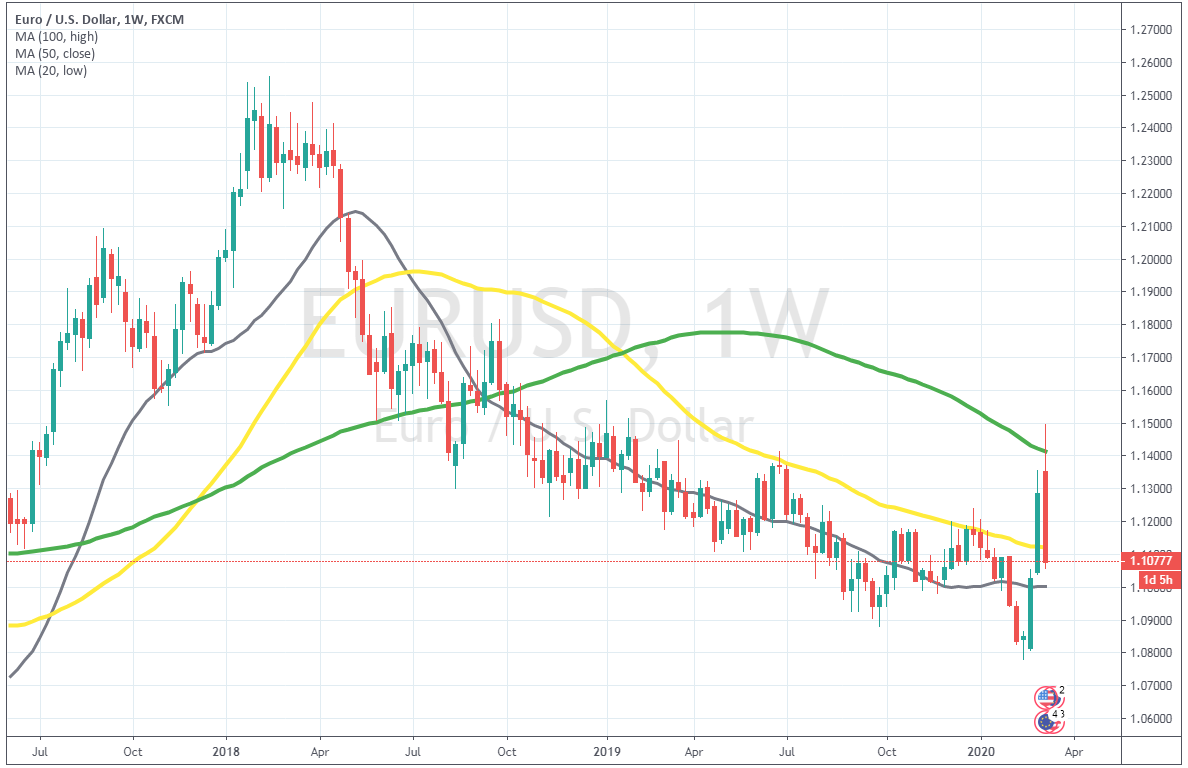 EUR/USD reversed at the 100 SMA

EUR/USD made quite a climb in the last two weeks, despite the outbreak of coronavirus in Europe, particularly in Italy. Italian economy has been shut down and the rest of Europe will follow, which will hurt the economy and probably put it in recession, so the climb seemed strange. But, the climb ended at the 100 SMA (green) on the weekly time-frame chart. Buyers pushed above that moving average for a while, but that doesn’t quite count as a break, since the candlestick didn’t close above it. So, EUR/USD failed to break the 10 SMA and it seems like buyers gave up. After all, it was a respectable retrace, climbing from 1.07 lows to 1.15.

But, the price reversed on Monday this week and it has been going down since then. Today, the decline picked up considerable place, after the ECB announced it would increase QE by 120 billion Euros/month and announce new LTRO. The USD has also played a part in this, since it has been strengthening considerably today, so we have a bearish bias for this pair.

There wasn’t much panic today, but the sentiment remained negative after US President Donald Trump decided to close flights with Europe. Stock markets continue to decline, but safe havens have also turned lower. The Euro is the biggest loser though, after the ECB decided to increase the stimulus package.