Daily Brief, February 23 – Everything You Need to Know About Gold - Forex News by FX Leaders 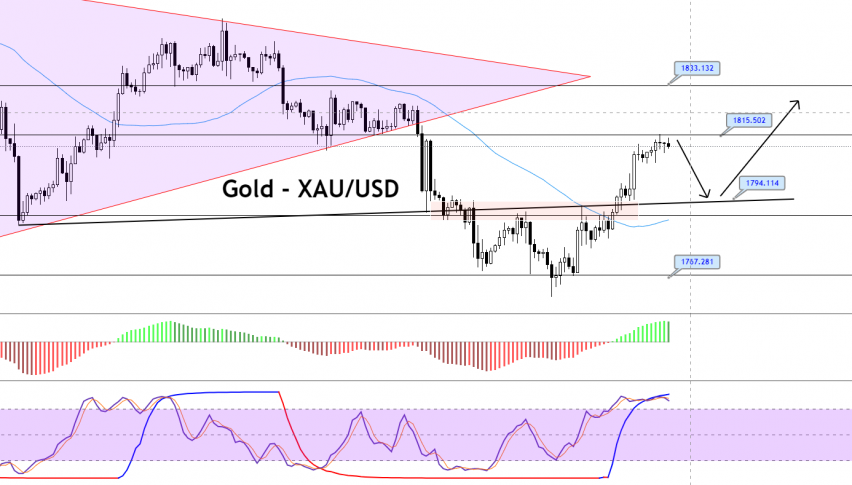 Daily Brief, February 23 – Everything You Need to Know About Gold

GOLD closed at 1,809.60, after placing a high of 1,812.60, and a low of 1,780.62. Prices for the precious metal extended their gains for the third consecutive session, rising more than 1.5%, to a near one-week high on Monday. Gold prices returned to the $ 1,800 level per ounce, on the hopes of reflation of the US economy, due to Joe Biden’s $ 1.9 trillion coronavirus stimulus package, which is expected to be released soon.

Reflation is a fiscal or monetary policy designed to stimulate spending, expand output and reduce the effects of deflation, which usually follows a period of economic uncertainty or recession. Reflation is also described as the first phase of economic recovery after a period of contraction. During reflation, the US dollar usually weakens, and the prices of commodities rise. This is known as reflation trade.

The demand for the safe-haven metal rose after inflation expectations increased, while the weak US dollar added further support to the rising prices of the yellow metal. On the 10-year note, the US Treasury yields almost hit the highest level in one year, increasing the opportunity cost of holding non-yielding bullion. On the other hand, the US Dollar Index fell by 0.4%, to 89.98, which was its lowest level in six weeks, which, in turn, weighed heavily on the US dollar.

The rising US Treasury Yields and a declining dollar, along with the inflation concerns, pushed investors into safe-haven assets, like gold, which is also considered to be an inflation hedge. The US dollar was low on the board, due to rising expectations that the $ 1.9 trillion US stimulus package proposed by Joe Biden will be passed by the end of this week. These expectations added to the hopes of a speedy economic recovery, at the cost of rising inflation; as a result, gold stepped in and gained traction, reaching $ 1,800, due to its status as a hedge against inflation.

On the data front, at 20:00 GMT, the CB Leading Index for January came in, indicating a rise to 0.5%, against the previous 0.4%, which supported the US dollar and capped any further upside momentum in the gold prices on Monday. Meanwhile, the outlook for the US dollar also remained weak, as the expected stimulus to the tune of nearly $ 2 trillion, which will follow the almost $ 4 trillion that was issued under Donald Trump’s administration, will only add to the US fiscal debt and deficit. The weak US dollar boosted the gold prices on Monday, pushing them higher, to post gains.

Apart from the US stimulus package, investors will also be keeping an eye on US Federal Reserve Chairman Jerome Powell’s testimony on the Semi-annual Monetary Report before Congress on Tuesday. Furthermore, the ultra-low interest rates from the Fed and other leading central banks across the globe, in an effort to get the economy out of the economic fallout driven by the coronavirus pandemic, also kept the prices for the yellow metal higher. However, the gains in gold remained checked by the optimism regarding the recovery of the US economy, triggered by the publication of the latest minutes of the FOMC meeting in January.

The minutes revealed that Fed officials were more optimistic about the economy than they had been in the previous month. The main reason behind the upbeat economic projection was the progress in terms of vaccinations and the expectations for the expected massive additional fiscal support to the economy. 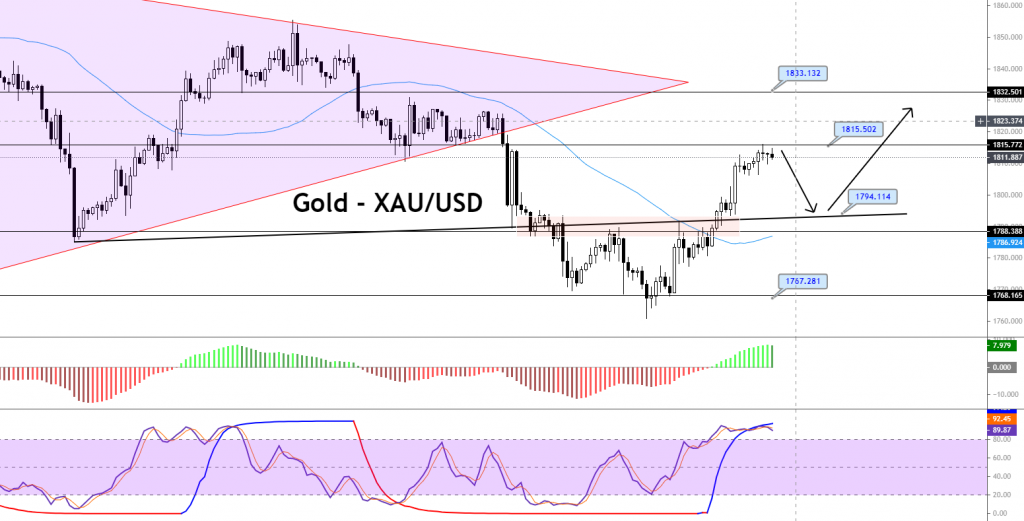 Trading in the precious metal, GOLD, was bullish on Monday, and it is now trading at the 1,810 level. On the higher side, gold is likely to find immediate resistance at 1,816.
a bullish crossover at the 1,816 level could extend the buying trend until the next target level of 1,826. On the lower side, gold could find support at 1,806 and 1,800, while the 10 and 20 periods EMA are likely to extend the buying trend in gold. A bearish bias prevails below 1,816, and above this, it is likely to be bullish. Good luck!

Daily Brief March 02 - Everything You Need to Know About Gold Today!
9 hours ago