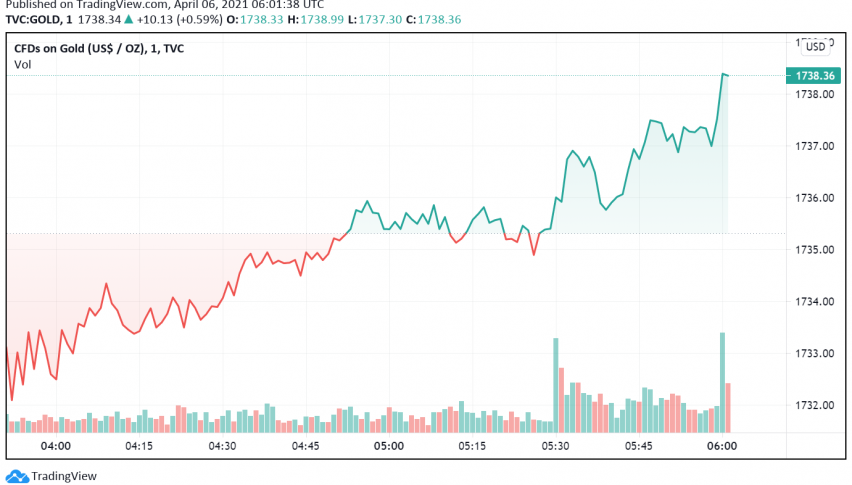 Gold is making gains in early trading on Tuesday, buoyed as the US dollar and Treasury yields slide lower, which has made it more attractive for holders of other currencies to purchase, driving up its demand and boosting its prices for now. At the time of writing, GOLD is trading at a little above $1,738.

The benchmark 10-year US Treasury yields have slid below 1.7% after rising to the highest level seen in 14 months over the past few sessions. This has also turned the dollar bearish, sending it to an almost two week low against most of its major rivals. While lower bond yields decrease the opportunity cost of bullion and make it more appealing as an investment, a weaker dollar drives up purchases of gold by holders of other currencies, helping push up its demand as a result.

The yellow metal is also trading bullish on the rising prospects for higher corporate taxes in the US, after President Biden stood by this proposal as a way to pay for his recently announced $2 trillion infrastructure plan. In addition, the precious metal’s safe haven appeal also enjoyed support from recent comments from Cleveland Fed President Loretta Mester on the central bank’s plans to remain dovish to boost economic growth further.

However, gains in gold remain limited on rising optimism for rapid economic recovery in the US. Investor confidence in the world’s largest economy remains high on the back of stronger than expected data releases, including the most recent employment report late last week and a record surge in non-manufacturing activity across the US in March.