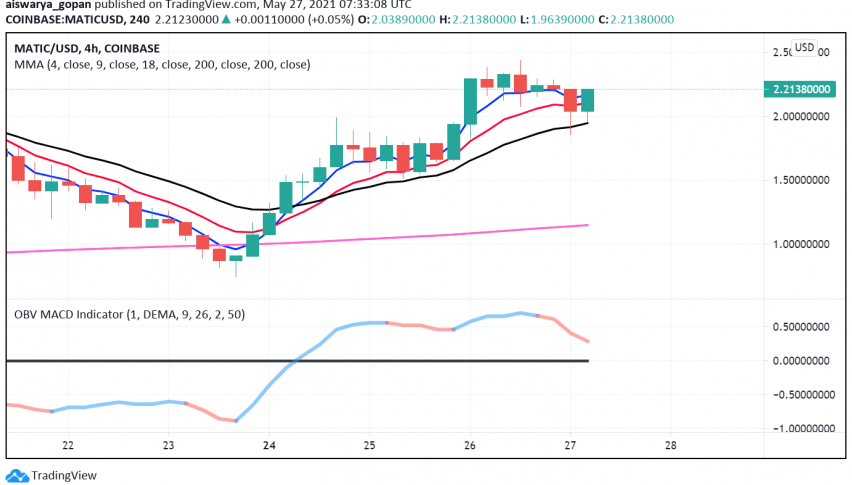 Leading L2 scaling solution for Ethereum, Polygon (MATIC) has resumed its bullish moves after a temporary dip over the past 24 hours. The digital asset has been in the limelight ever since news broke about billionaire Mark Cuban’s interest and investment in the company.

At the time of writing, MATIC/USD is trading at around $2.21, after having lost over 4% of its value since the previous session. However, fundamentals as well as technicals are providing support for the uptrend to recover and strengthen in the near-term.

With a market cap of over $13 billion, Polygon is the 14th most popular cryptocurrency on CoinMarketCap’s list, experiencing a phenomenal rise from the beginning of this year when the figure stood at a mere $200 million in comparison. While we don’t know the exact figures just yet, we do know that the company that offers a way to solve scalability and speed issues on the Ethereum network has received a sizeable investment from Cuban, which could not only help speed up its development but also see increased adoption, especially from the billionaire’s other companies.

Co-founder of Polygon, Sandeep Nailwal, also expressed in a recent interview that the company is now keen to catch the eye of Tesla CEO Elon Musk. As one of the fastest growing blockchain ecosystems, the scaling solution already supports over 250 dApps and almost 800k users.

After posting a solid recovery from the recent crypto market crash, MATIC has seen its price rally over the past few days, climbing above the key $2 level over optimism from Mark Cuban’s investment taking Polygon into the top 20 list of cryptocurrencies. On the 4-hour price chart, moving averages are doing a great job of supporting the strong bullish trend in MATIC/USD.

In addition, the MACD indicator is also signaling a bullish bias in this cryptocurrency. The immediate resistance level of interest now sits just above $2.80 level but a confirmation of the uptrend requires buyers to take Polygon’s price above the pivot at $2.32 for now.

On the other hand, if the market sentiment sours and selling pressure increases, the price could collapse below the $2 level all the way down to support which sits at $1.53.