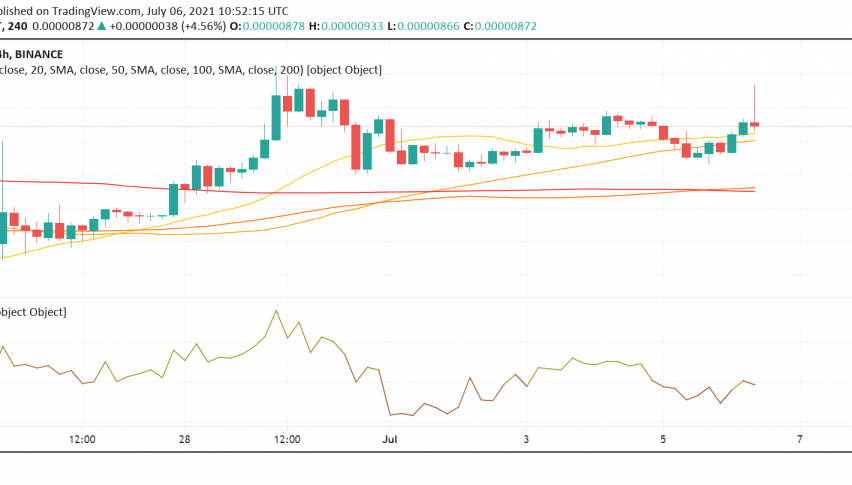 Shiba Inu (SHIB) is making small gains into Tuesday and looks set to cross a key level and make its way higher towards $0.000010, as we have been forecasting since the beginning of the current week. At the time of writing, SHIB/USDT is trading around $$0.0000087.

After testing and rising back up from a key support level over the past few sessions, it looks like buyer confidence in the memecoin is building up as its price gets ready to breakout to the higher side. However, such a move can only sustain so long as the market sentiment towards cryptocurrencies in general remains positive as it has done in the recent sessions.

The uptrend in Shiba Inu has been supported by a sense of optimism among crypto investors today as the leading digital currency, Bitcoin, takes another shot at the key $35,000 level. Although its price has slipped below $34,000, there is some hope that the bear run in the space could be coming to an end.

The Shiba Inu coin could also be boosted by Shopping.io’s recent announcement that it will now accept payments in SHIB for users to shop online on leading retailers, Amazon, eBay and Walmart. The announcement also drove SHIB to become the most trending cryptocurrency on Twitter through the previous session.

We can see on the H4 chart of SHIB/USDT that most of the moving averages are suggesting a bullish bias. However, the momentum indicator is signaling some bearish pressure as well.

Shiba Inu’s price is holding right above the pivot point which sits at $0.86. Buyers will now face resistance at $0.97 as they attempt to take the Doge killer higher in the near-term. The next resistance they are likely to encounter sits right on the key level at $0.000010.