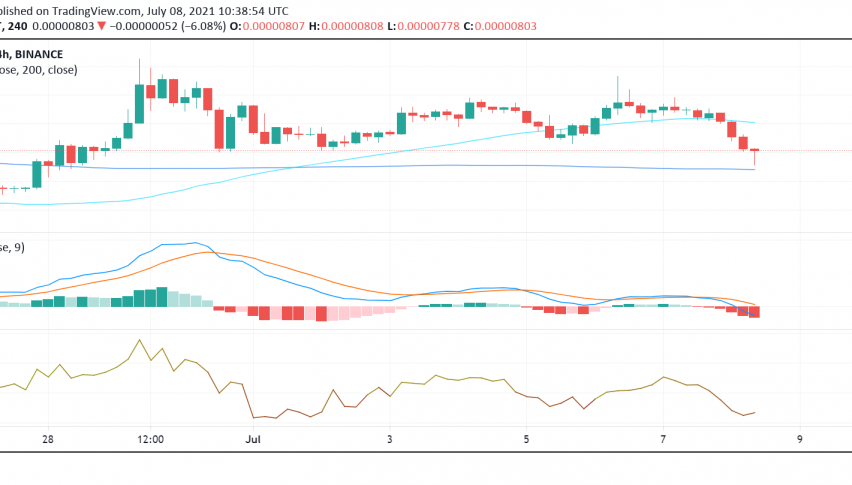 How’s Shiba Inu (SHIB) Moving After the Launch of ShibaSwap?

Emerging memecoin Shiba Inu (SHIB) is on a downtrend early on Thursday, as the bearish mood in the crypto sector extends beyond market leaders BTC and ETH, weighing on almost all digital currencies across the board. At the time of writing, SHIB/USDT is trading around $0.0000080, down by almost 8% in the past 24 hours.

Earlier this week, the potential DOGE killer enjoyed quite the boost, soaring by over 6% on launch of the eagerly awaited decentralized exchange (DEX), ShibaSwap. In addition, news of integration of SHIB on Shopping.io’s platform, letting consumers make purchases from leading retailers such as Amazon, eBay and Walmart also supported the strong uptrend seen in Shiba Inu recently.

ShibaSwap will allow users to trade a variety of dog-based memecoins, a move that can potentially increase interest in the SHIB token in the near future. The DEX appears to be powered by SHIB as well a new token called LEASH.

According to developers, a new token named BONE will also be made available for trading soon. Shiba Inu’s prospects could be raised even higher as the developers plan to empower the digital currency with support for NFTs via ShibaSwap as well in the coming months.

On the 4-hour chart of SHIB/USDT, most of the moving averages, except the 100 SMA and the 200 SMA, as well as the MACD are exhibiting a bearish bias. However, the momentum indicator is signaling some buying interest.

Although, Shiba Inu’s price has some catching up to do to reach the pivot point at $0.0000086 before the outlook turns bullish. In the meantime, pay attention to the immediate support at $0.0000076 in case selling pressure builds up further. If this is broken, we can see sellers take the price even lower, towards the next support at 0.0000066.