The Indian Rupee and the Australian Dollar are both risk currencies; the AUD is a commodity currency, while the INR is a developing market currency. Yet, the long-term fundamentals have been in favour of the AUD, hence the long-term bullish trend. The AUD/INR topped at 62.50 in 2013, after a crash in the INR, as the deficit increased in India, but it has been retracing lower since then.

However, the coronavirus situation has increased the uncertainty immensely, for every currency. So, while the fundamentals in Australia might be uncertain for the mid-term future, they are not very positive for the INR, which was the reason for the reversal in the AUD/INR. This pair is currently trading above 52, and it seems like it is heading for the highs now. The question arises, what is the AUD/INR price forecast likely to be?

Recent Changes in the AUD/INR Price

The AUD/INR was trading below 20 in the early 1990s, but it then began increasing constantly until 2013, when it reached a peak. The trade war between the US and China didn’t help the situation for the AUD though. This was the reason for the second leg of the retrace lower, which was intensified by the outbreak of the coronavirus in Q1 of this year.

But, the Australian Dollar Index AXY has surged higher since March, climbing around 17 cents as the sentiment improved, and overcoming the bullish reversal in the INR, which has resulted in a 13 cent increase in the AUD/INR. So, this pair is back on the long term bullish trend, and the picture points to further upside momentum, initially climbing above 55 and then targeting 60 and the all time high at 62.50.

AUD/INR Price Prediction for the Next 5 Years

Fundamentals Favour the AUD Over the INR

The Australian Dollar has benefited from the rapid expansion of the Chinese economy, since the Dragon Nation is a main export destination for the Australian raw material market. This kept the Aussie in demand until 2013, while the Indian Rupee crashed lower that year, as the trade deficit reached an all-time high, putting the INR under pressure. The deficit remains high, since India is a net importer, and this has been keeping the INR under pressure, but the situation has reversed for the commodity dollars, as main commodities have been declining in the last decade. As a result, the Australian Dollar has been declining too, and since 2018, the situation has been amplified by the trade war between the US and China.

The outbreak of the coronavirus gave the AUD another push down, as commodities tumbled lower, with US crude oil falling to -$ 37.50. But, commodities and the risk sentiment have improved since then, which has turned the Aussie bullish. In India, the deficit remains high, while inflation has also increased considerably since the middle of last year, standing above 6% as of October 2020. On top of that, the central bank of India (RBI) has been cutting rates this year, with expectations of further cuts, since there is room for further similar actions. All of this will keep the INR under more pressure, while the situation for the AUD is fairly neutral, so the uptrend is expected to continue in the AUD/INR.

Technical Analysis – Will MAs Push the AUD/INR Below the Support? 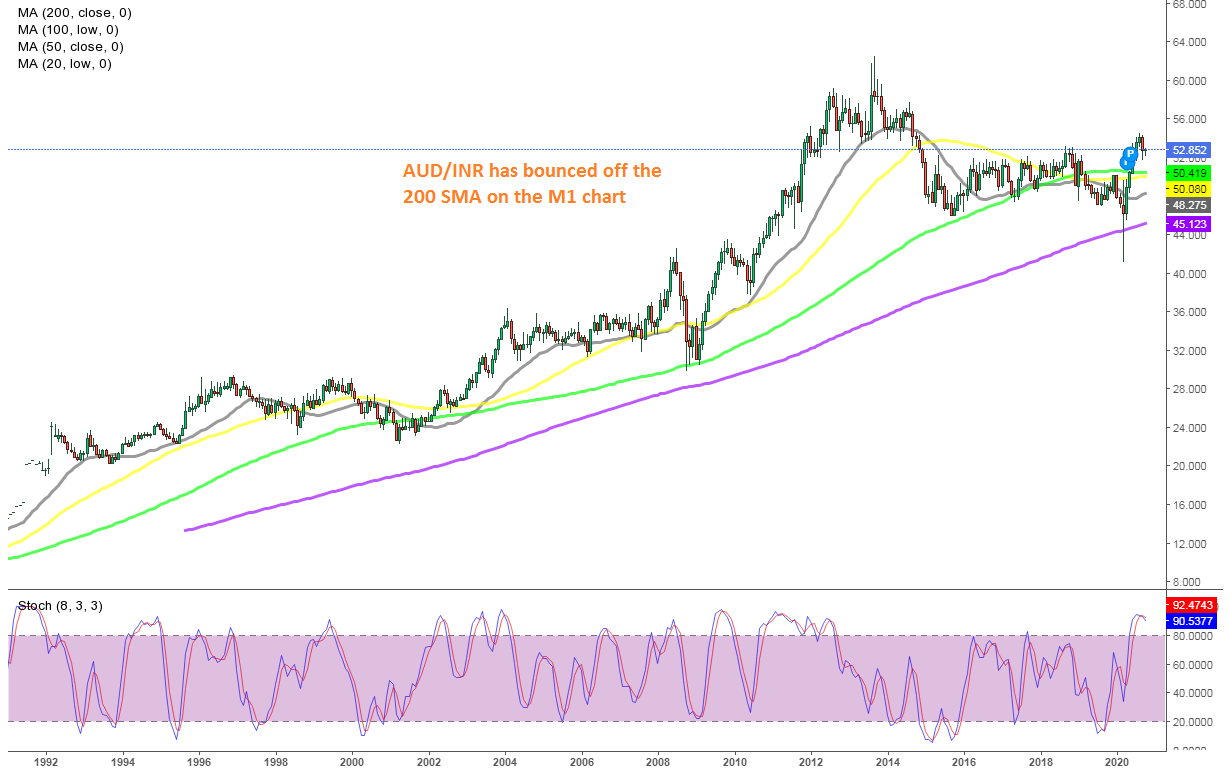 The 200 SMA held despite being pierced

The technical analysis also points to further upside momentum for the AUD/INR. The main trend is bullish, with moving averages having provided support for this pair on the monthly chart since the early 2000s. The trend wasn’t too strong during the “90s, but it picked up pace during the 2000s, and even more so until 2013. The price formed an upside-down hammer candlestick in 2013, which is a reversing signal, after which it started to reverse down. But the 20 SMA (gray) held as support until 2014, when it was broken. The 100 SMA (green) took its place though, and it pushed this pair higher from 2015 until 2018, when the US-China trade war, which hurt the AUD, started. Then the coronavirus came, and the AUD/INR fell to 41, retreating more than 21 cents from the high of 62.50 – just one-third of the value. 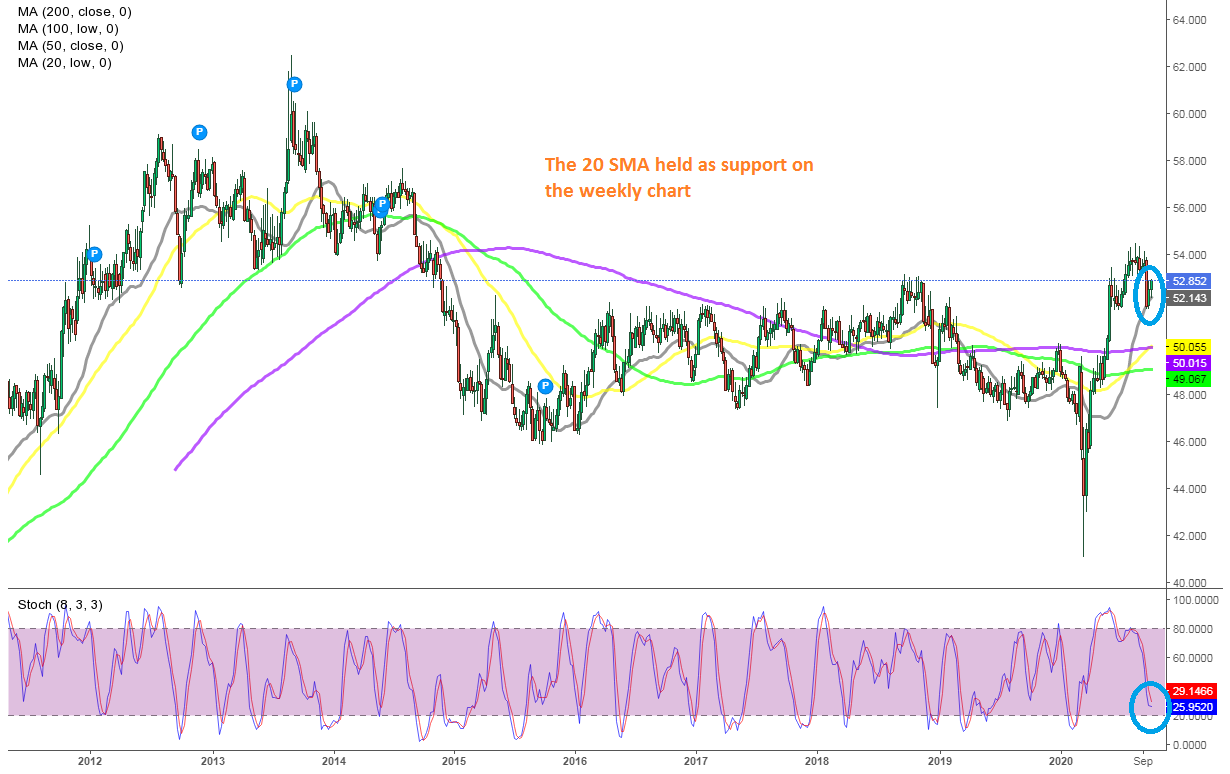 On the first attempt, the 20 SMA held on the weekly chart

However, the retrace lower ended at 41, and the big reversal came after that. The AUD/INR climbed more than 13 cents, getting close to 55, but retreated lower during the last week of September. Although, the pullback seems complete on the weekly chart now, with the stochastic indicator being almost oversold and the price bouncing off the 20 SMA, which has turned into support. But the monthly chart at the top of this article is overbought now, and the retrace lower might continue beyond September, probably until the price reaches the 100 SMA, which has acted as support before, now standing at 50. That’s where the 200 SMA (purple) stands on the weekly chart, so odds are that the retrace might continue until 50, before the bullish trend resumes in full.