The UK Housing Sector Bounces Back, But Market Sentiment Weighs on GBP Pairs

The UK housing market seems to have left behind all the Brexit scare. I'm sure the Brexit hullabaloo will continue for years, but the people living in the British Isles will keep living. They/we will continue to buy presents, go to pubs, buy clothes, enjoy some nice food on family gatherings, and of course, purchase new homes or expand existing ones.
By the way, the culinary and food culture has evolved a lot in the UK over the last few decades. So, those who think that mashed potatoes, peas, and fish with chips are all you could find on family tables, hold outdated opinions.
Anyway, back to the housing market and the numbers for October. Here is a quick round up of the numbers for all the components of the housing report:
Around 63k mortgages were approved in September against 61.5k expected and the previous month´s approvals were revised about 1k higher. Lending to the SME (small and medium enterprises/businesses) made a total turnaround from -411 million in August to 842 million Pond in September. Total lending also made an impressive jump from -415 million to over 1 billion.
Credit card lending also jumped by more than 1 billion month/month; the only disappointing number was the BOE (Bank of England) consumer credit which declined in September.
Generally, this is a pretty upbeat report even if Brexit wasn´t looming over our heads. The declining consumer credit is worrying since the UK economy is based on the domestic demand and that might bring trouble for the housing market in the foreseeable future.  However, at the moment, the sentiment in the housing market is positive. 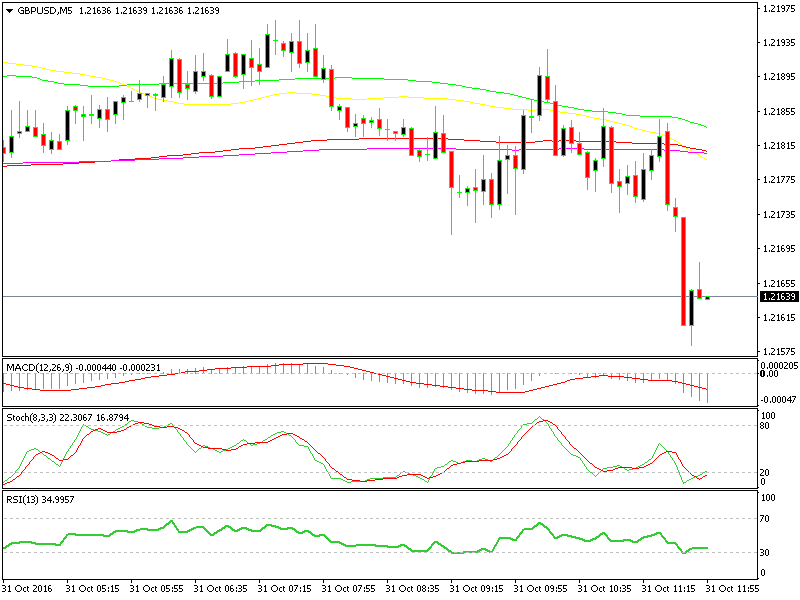 It´s difficult to turn the market sentiment around

That said, the sentiment in the forex market  towards the GBP is not positive at all. As you can see from the GBP/USD chart above, this forex pair lost about 25 pips after the UK housing report was released. As my colleague Eric pointed out in his post yesterday, the BOE meeting is due on Thursday and this piece of economic data might offer some consolation to them, but I don´t think it will change anything regarding the monetary policy.