Mixed Messages from EU Officials, Mixed Signals from the Euro

What a rollercoaster the Euro has gone through this morning. It lost about 135 pips in the first trading hour after the Tokyo trading session started, but it failed to break the 1.520 level immediately. The price bounced about 40-50 pips up and down for almost half an hour but it finally broke that long term support level.

Oops, did I say break? Well, it did pierce the 1.0520 level and reached as low as 1.0505 on my MT4 platform, but according to my rules l, that's not a proper break. You can't consider it as a break when the price moves a dozen of pips below a support level for a few minutes and then moves back up, only to shoot nearly 230 pips higher.

So, that's not a break to me. For that matter, the big support/resistance levels are not just a line on the forex chart, they're more like a cluster of support/resistance made up of many lines and levels in a 340-50 pip range, or even wider sometimes. 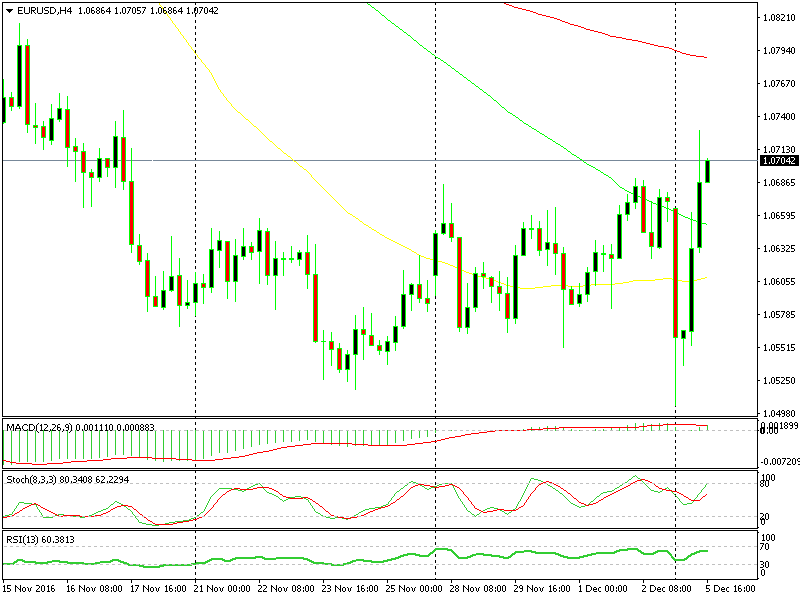 Thin liquidity has contributed to this EUR/USD rollercoaster

The vote against the Italian constitutional changes means that the Italian PM, Renzi, will resign soon, if he already hasn't done so. I haven't been updated in the last couple of hours. But that's not really a surprise since Renzi was trailing in all the polls. It's still a surprise that the polls didn't fail as miserably as they did with Trump and Brexit.

After all, this means more political uncertainty in Italy, which is nothing new for the Mediterranean pizza and spaghetti chiefs. If you remember, Spain went on without a government for more than 6 months, yet the Spanish economy flourished during this time. I guess sometimes it's better not to have a government at all. They just make things that extra difficulty for the businesses.

Meanwhile in Europe, the comments from the Vice President of the EU commission showed he is worried about Eurozone stability when he said that there already was a lot of uncertainty before the Italian referendum. He's got a point there, doesn't he?

On the other hand, Nowotny also said that the Italian referendum has no impact on the forex market. Yes, the Euro is now around the levels it was last night, but a 200 pip move is nothing to go by unnoticed. Probably, it would be a good investment if here at FXML we put all our savings together to buy the guy a pair of glasses. Who will be the first contributor, guys?

Powell Speaks, Greenback Breaks Out Vs The Majors
12 hours ago