Welcome back, traders. Hope everyone is back and ready to hear about the exciting trade opportunities this week. Though the 2nd week of May was very volatile due to the lack of macroeconomic events, our forex trading signals successfully managed to gain a good number of pips.

The previous week ended with slight gains in the U.S. dollar due to multiple reasons. These reasons include the phenomenal labor market figures, hawkish Fed Statements, and the dovish stance from the BOE (Bank of England). We saw another round of buyers after the Boston Fed President Rosengren sounded hawkish when he stated that three further rate increases were likely for 2017, although he is not a voter in the FOMC this year.

Now, let's move on to the trade opportunities and major fundamental events that are worth watching to determine this week's market trends.

Last week, the single currency Euro declined compared to the greenback and gave up its 4-week bullish streak. One of the biggest reasons for the bullish Euro remained the French election results. Later the market returned its earlier gains due to Macron's "priced in" victory.

In reference to our earlier Weekly Forex Signals Brief May 8 – 12, the EUR/USD hit our long-term target on the sell side. Since the Eurozone wasn't awaiting any major releases last week, the pair was influenced by the U.S. economic events.

On Friday, the EUR/USD soared due to the disappointing CPI and retail sales data by the United States. The U.S. monetary policy will probably have a big impact on the EUR/USD after the French election results have controlled the price action for the last several weeks.

At this point, the EUR/USD is consolidating in between trading levels, but sooner or later it's likely to come out of the range. Having said that, I would recommend entering a buy position above $1.0850 with a stop loss below $1.0830 and a take profit at $1.1000. 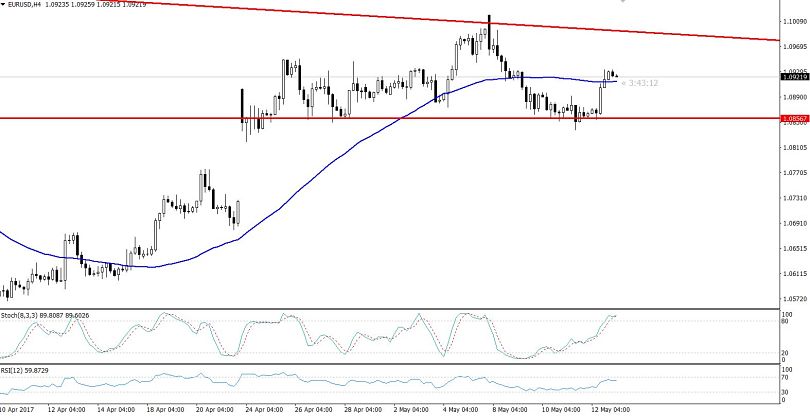 On the daily chart, the EUR/USD has formed a descending triangle pattern which is extending a strong support at $1.0850 and a resistance at $1.0999. It's the same trend line which pushed the EUR/USD lower over the past week.

For now, the pair seems to be in a bullish trend sseeing as it has formed a bullish engulfing candlestick pattern on the daily chart. This pattern demonstrates a strong buying trend in the market which can potentially push the EUR/USD to further highs. Let's have a look at the technical trading levels for the week.

The weekly forex trading signal on the USD/JPY was one of our best choices over the previous week. In our Forex Signals Brief May 8 – 12, we advised that buying is recommended above $113.10 with a take profit of $114.450. Though, the market didn't hit take profit level, it remained in profit for more than 120 pips.

Last week, the Japanese Yen made slight gains for two reasons. Investors increased their bets on haven currencies when the U.S. president suddenly fired the FBI Director, James Comey. Moreover, the unfavorable CPI and retail sale figures added more weight on the dollar and ultimately, investors shifted their investments on the Japanese Yen. 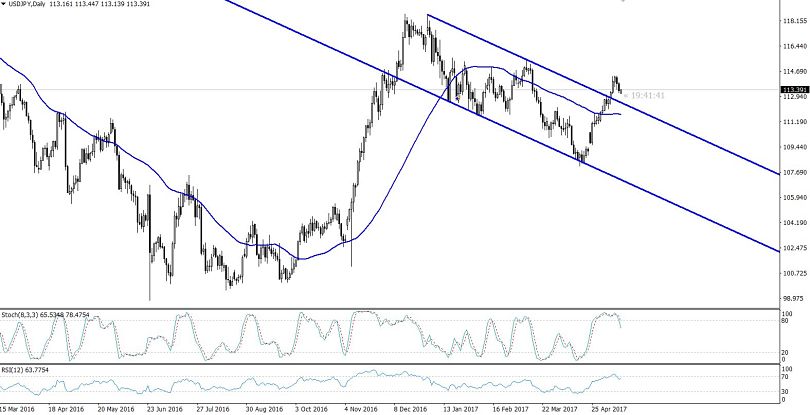 Over the previous week, the USD/JPY broke out of the bearish channel on the daily chart. The channel was providing a resistance at $113, which is now working as a support level.

We can see in the 4-hour chart that the pair has completed the 61.8% Fibonacci retracement at $113.110 and quite interestingly, that's the same level where 50-periods EMA is extending support to the pair. Hence, $113.110 is likely to remain in focus and have a buy or a sell entry.

Overall, the momentum indicators are bearish on the lower timeframe (1-hour & 4-hour) due to retracement. But on the daily timeframe both indicators, RSI & Stochastic are in the buying territory.

Contrary to the previous week, the current week is full of macroeconomic events which are due to be released from almost all the major countries. In particular, the GDP figures from Japan, claims from the U.K and the U.S., along with Australian Labor market data are likely to be in focus. Buckle up, this week will be as exciting as the 1st week of May. Countless opportunities are waiting ahead.

EUR/USD Retreats Below 1.05 After ISM Manufacturing Falls in Contraction
1 day ago