Yesterday, investors settled into their earlier positions in anticipation of US Independence Day in order to avoid unpredictable fluctuations. Nevertheless, our forex trading signals on currencies, gold & indices performed really well. We have finally added S&P500 to our portfolio and yesterday we managed to close green pips in the US index.

Today, on July 4th, we are likely to encounter thin trading volume and liquidity as the US banks will be closed in observance of Independence Day.  At the moment, the Buck is trading steadily after surging due to upbeat US economic figures. In addition to this, investors' focus shifted to the Reserve Bank of Australia's (RBA) policy decision to discern if they will also join the ranks of hawkish commentators.

Today, we don't have much on the economic table, however, before the US sessions, we should monitor a few economic events.

EUR – Spanish Unemployment Change is due to be released at 7:00 (GMT). The figures show the change in the number of unemployed people over the previous month. The figure is expected to be in favor of a single currency Euro, but since the data is not really high impact, it may have a slight influence on the exchange rate.

GBP – Construction PMI is scheduled to be released at 8:30 (GMT) with a slightly negative forecast of 55, which is below 56 (previous). The figure above 50 signifies the growth of the economy.

The single currency Euro traded lower against the US dollar. The bearish momentum wasn't because of weakness in the Euro, but due to correction in the weak dollar. As discussed in our weekly forex signal report, the dollar was supposed to retrace back as it was holding in the oversold territory.

In addition to this, there was a slight upward change to the Eurozone PMI manufacturing index. It rose to 57.4 figures for the month of June from the flash reading of 57.3 (previous). Consequently, the date renewed investor confidence in the industrial outlook.

Lastly, the Eurozone unemployment figure was consistent at 9.3% in May. It was also somewhat above predictions of a further deterioration to 9.2%, still, the overall impact was limited. 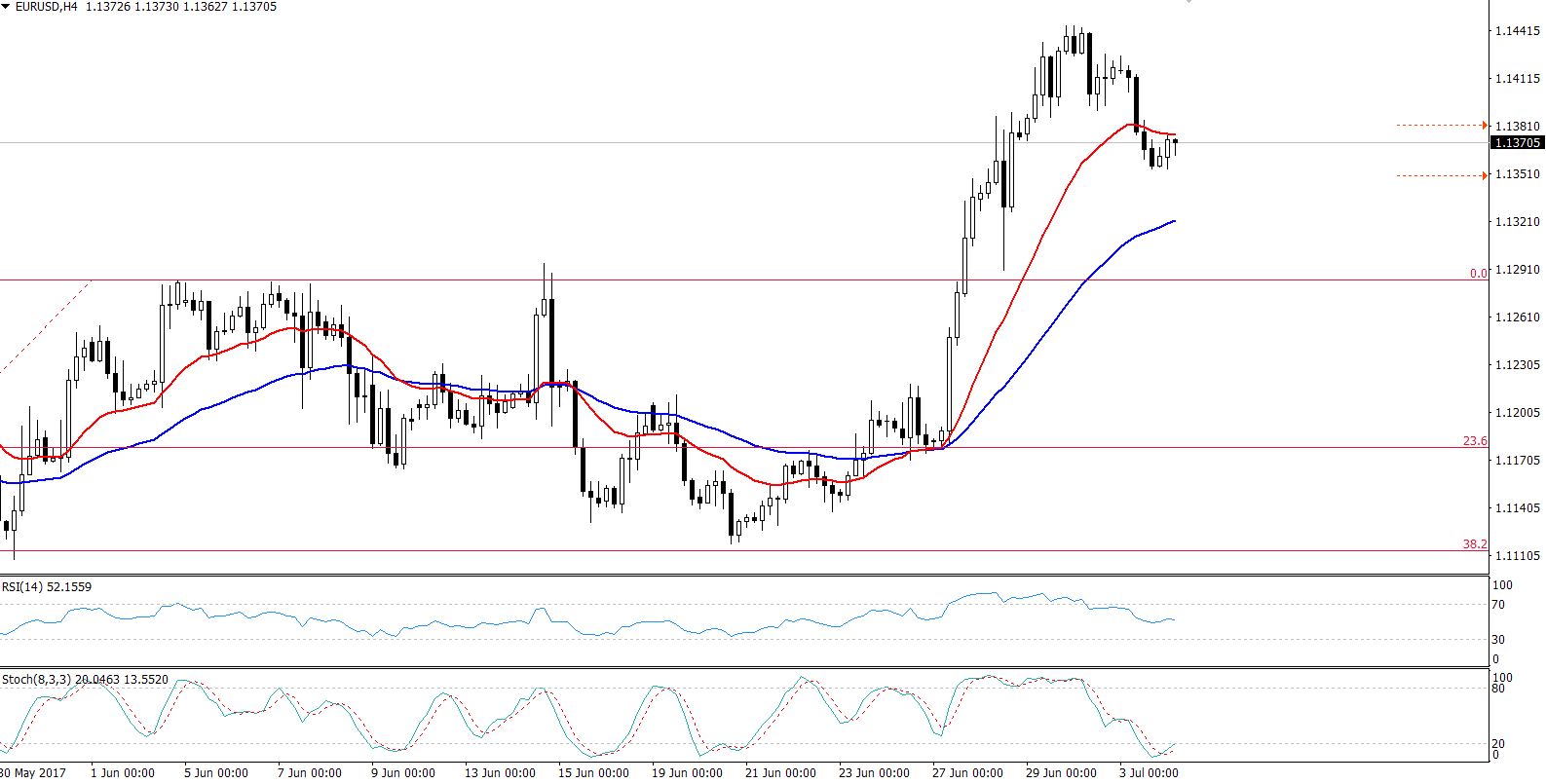 The EUR/USD has dropped below 50 – periods EMA, which is signifying a selling momentum in the pair. Looking at the hourly chart, the overbought currency pair has already completed a 23.6% Fibonacci retracement at $1.3785 and is now heading towards the 38.2% level of $1.1339. To learn more about Fibonacci, refer to our informative article here.

The momentum indicators, especially the RSI, shows a crossover on the hourly time frame. Besides that, Bearish Engulfing on the daily chart is signaling a bearish reversal ahead of major news expected later this week.

Today, the US markets are closed because it is US Independence day. Therefore we are expecting the market to trade bit slow. To cope with it, we need to trade level to level in order to avoid sticking in a narrow range. Keep following us for forex trading signals and further market updates. Good luck!