Forex Signals US Session Brief, August 24th – GBP Rejuvenated After GDP Data But We Are Fading It With A Sell Signal - Forex News by FX Leaders

Forex Signals US Session Brief, August 24th – GBP Rejuvenated After GDP Data But We Are Fading It With A Sell Signal

Everyone was eager to see the UK employment report today because it was due after a streak of weak economic data from the UK and a month of decline for the GBP.

The Q2 GDP report was released, the market was relieved and the GBP rallied for a while, getting closer to the level we highlighted in GBP/USD earlier on. We will explain this trade idea in this brief as well. The UK economy has slowed

Like in video games GBP has seemingly run out of lives as it has lost nearly five cents since early August. It has been peeling support levels layer after layer while the economic data has weakened.

So, there was a lot of interest today to see whether the GDP was going to dive with the rest of the figures such as construction PMI and services PMI.

At 0.3%, expectations were pretty low for the second quarter but considering the mess Theresa May is making of Brexit, no one expects much from the UK economy right now. There were signs of weakness in the report, specifically on the domestic side.

The surveying firm ONS, which carries out the poll, highlighted the weakness in H1 this year saying that the weaker Pound has hit households causing household spending and business investment to flatten out.

That´s not good news for the UK economy and for the Pound, although GBP/USD rallied at first. However, it is now falling, so our trade is looking pretty good at the moment. 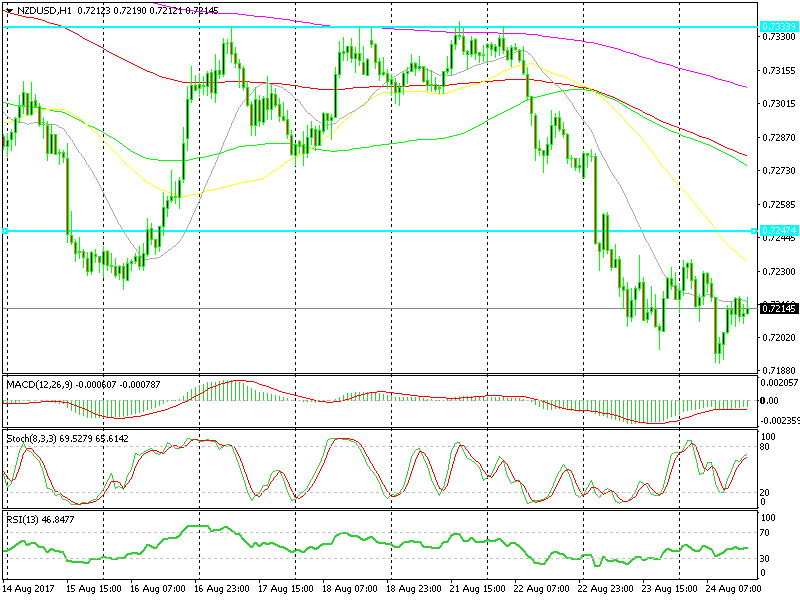 The 20 SMA is doing a good job again

We have been bearish on this forex pair over the last few weeks with good reason since the downtrend in NZD/UD has been relentless.

Now I see another selling opportunity for all the reasons I have listed above. I’m not sure we’ll take that trade though because we already have three forex signals open. But, feel free to take the trade if it suits your money management strategy. 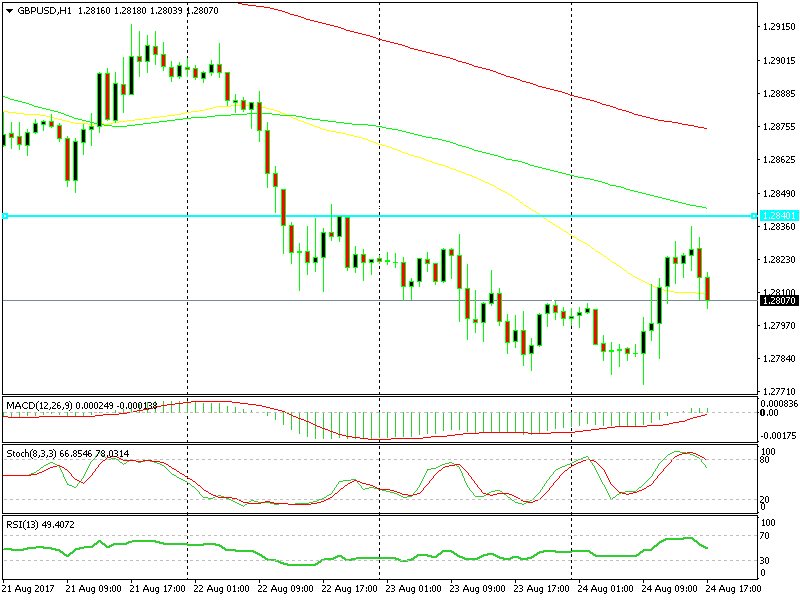 We didn't even reach the resistance area

We opened a sell signal in this forex pair a while ago. As I mentioned in the previous forex update, I was waiting for the price to reach 1.2840-50 in order to sell this pair, but after making a doji on the hourly chart, I decided to open the signal.

That sort of price action only points down; it shows that buyers can’t even push the price to the resistance, so if it can’t go up it will surely go down, right?

Today has been another quiet day if we compare it to what we’ve seen in recent months. It's important to remember that it is still summer and the markets are waiting for the central bankers to start talking on Friday evening.

That being said, these sort of markets offer a lot of short term trading opportunities. We have taken advantage of a few of them, selling AUD/USD and GBP/USD, while going long EUR/GBP. Let´s see how these trades evolve today.