It has been a relatively strong week for the USD across the majors. The movement in pricing has produced many opportunities to profit over the first four trading sessions. Is this the beginning of an intermediate-term USD bull run moving into the close of 2017?

Talks of a prolonged recovery may be a bit premature. However, the recent strength against the EUR, CAD and CHF gives one reason to ponder the long-term prospects of the greenback.

The Swiss franc is a traditional safe-haven among currency investors. It has been surprising to see the USD rally against it in the aftermath of the Las Vegas mass shooting. 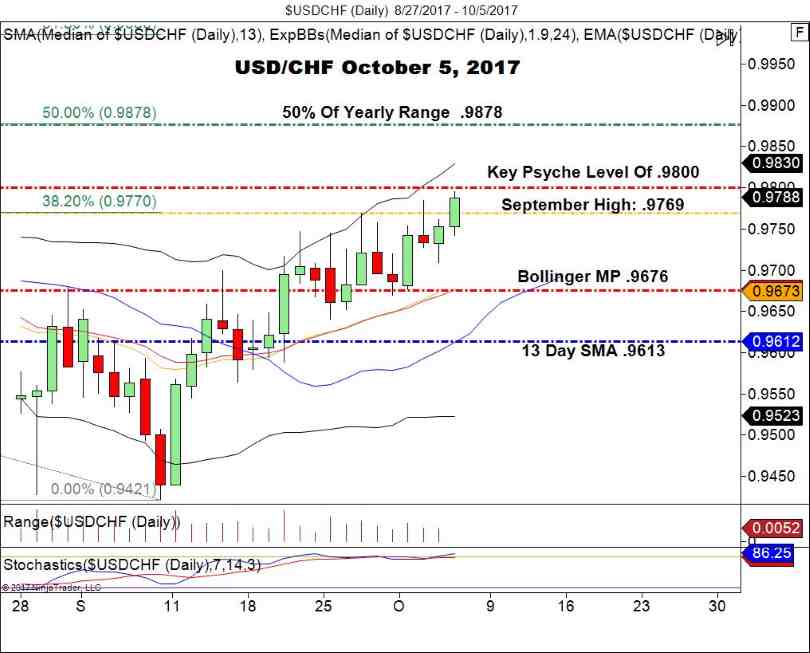 Earlier this week I outlined the roadmap for the USD/CHF. As of now, we are coming into an interesting technical area. Here are the high points:

Bottom Line: There are many ways to trade this market. As of yet, we are not in full-blown rotation. A breakout above .9800 is very possible. Here are the entries I will be looking at:

Until a hard range for today is established at close, trade management is mostly guesswork. Short-term scalps may be the play, or affordable positions may be taken. A position long from .9770 with a stop beneath today’s intraday low is a good way to play a 1:1 R/R run back to .9800.

The best course of action is to re-evaluate before tomorrow’s U.S. unemployment number is released. We may have a chance to buy a breakout above .9800 or sell the yearly 50% retracement on heavy participation.

Until then, trade smart and watch the risk management!

Booking Profit on EUR/USD Signal, Despite the Improved Economic Sentiment
3 weeks ago
Further Signs the US Economy Is Accelerating
ISM services and ADP employment reports showed further expansion in the US economy
1 month ago