Forex Signals US Session Brief, January 10 – Trade War is on Between US and China - Forex News by FX Leaders

Forex Signals US Session Brief, January 10 – Trade War is on Between US and China

Donald Trump warned the world that America was going to be selfish after he got elected. That would likely spark trade wars. Indeed it looks like the two global giants are getting into position. The Chinese announced reducing the purchase of US bonds and the Dollar is getting battered. That’s working well for us though since we have a few forex signals where we are short on the Buck.

The trade war has started

The War Has Started. Who will Win, the US or China?

The slogan of Trump’s presidential campaign was something like “America First” if I recall correctly. He promised to bring businesses back to the US and he’s trying to do just that, although his actions are questionable.

Yesterday, I heard that the White House was going to sanction China on steel and aluminum exports to the US since the trade balance is enormously positive for China and negative for the US. Well, the Chinese aren’t going to sit back and allow that to happen.

They decided to fight back and Chinese officials “recommended” slowing down or even halting the purchase of the US treasuries. Chinese officials have been reviewing FX holdings and supposedly they want to diversify them away from the US Dollar.

This makes some sense, but we know this is about getting the US off their backs. Otherwise, how can you explain this just one day after Trump warned about sanctions on China?

This is all going against the US Dollar at the moment. But, that’s what Trump wants, doesn’t he? Trump promised to bring back business to the US and weaken the US Dollar. I don’t know how much business this administration will persuade to come back to the US, but the Dollar is losing ground as I speak.

We’re not complaining since this move is going in our direction. We closed one of our USD/CAD signals manually for a 20 pips profit. The rest of the forex signals are back on track now after giving us a hard time last night.

The 50 SMA Is Holding Again in Bitcoin. Is the Big Reverse Coming?

Yesterday, we looked at the H4 chart in Bitcoin. The 100 SMA was providing solid support making it seem that the price was about to reverse higher. However, it wasn’t the H4 chart that was driving Bitcoin around, it was the daily chart.

The price of Bitcoin decreased further today and it reached the 50 SMA (yellow). This moving average has been providing strong support since November of last year. It has been holding the uptrend in place during the last few months.

It was pierced for a short period on every attempt to break below it, but the price has reversed back up and the uptrend has resumed. We’re at this moving average again. From the price action, it looks like it is holding again. The price pierced it briefly and reversed back up. Now we’re $700 higher from the lows.

According to this chart setup, Bitcoin is about to resume the uptrend now or at least make a decent bounce. It has done so every time the price has touched the 50 SMA. Sellers couldn’t hold the price below the 50 SMA today, so the next move is up, in my opinion. We’re still long on Bitcoin so we’re holding on to this trade. 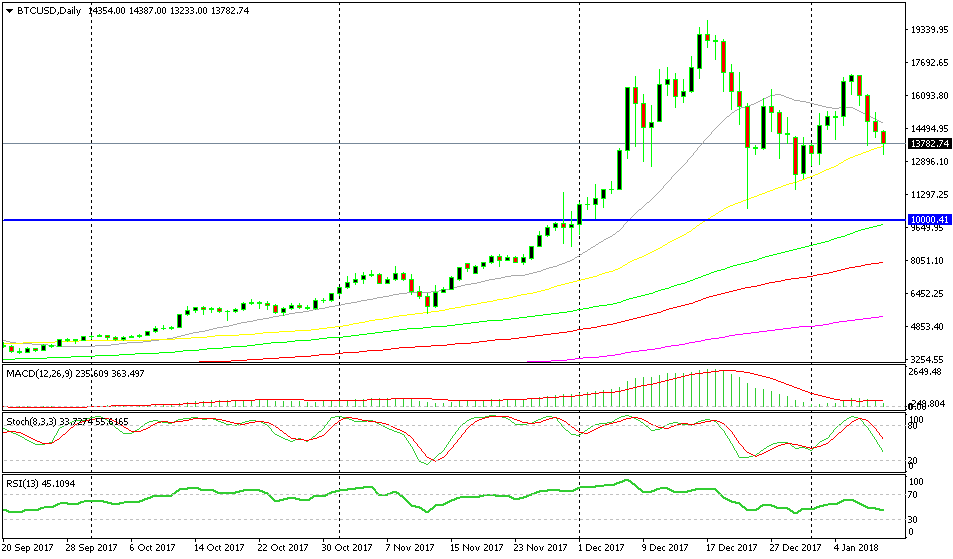 The 50 SMA is holding again 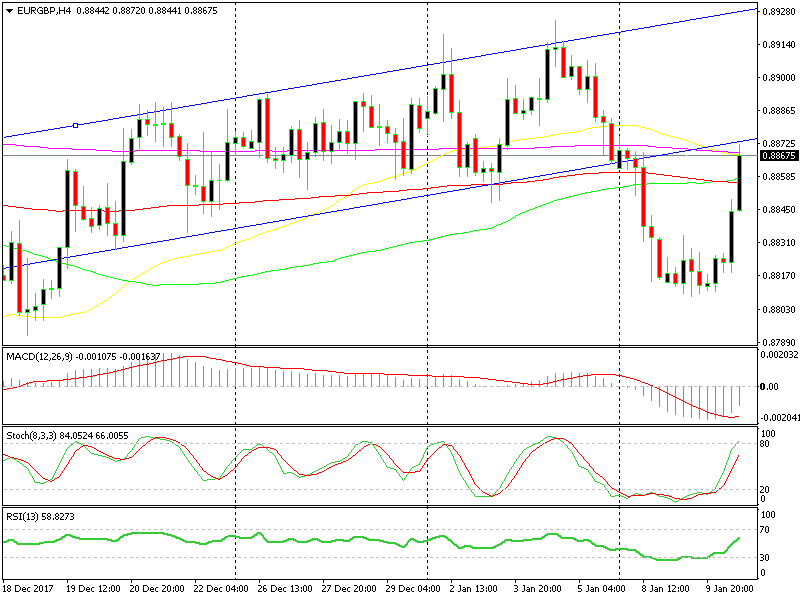 We opened a sell forex signal earlier on. We sold EUR/GBP at 0.8860. The trend is bearish, so this is just a retrace before the next move lower. The retrace seems to be complete; stochastic is almost overbought and the moving averages are providing resistance together with the lower line of the channel. Let’s hope the downtrend resumes soon.

That was it for the US Dollar rally. It enjoyed some good times this week but the negative events for the Buck don’t seem to stop. Well, we are short on the USD so, this move goes in our favor. US Crude Oil inventories are due later today, so we’ll keep an eye out since we have an open signal in USD/CAD and the CAD gets heavily affected by this piece of data.

Joe Biden Sworn In As 46th U.S. President
2 years ago