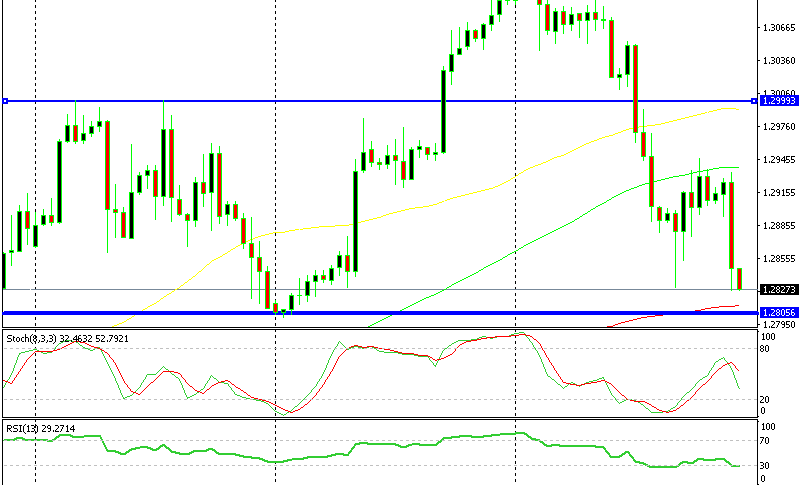 Forex Signals US Session Brief March 23 – All Aboard Safe Havens

Market uncertainty has increased recently. Forex traders are reluctant to buy the USD owing to the trade war that Trump is opening on all fronts. They are also reluctant to buy the Euro or the GBP at these levels owing to Brexit. So all that remains is the safe havens and that’s where cash is flowing at the moment. 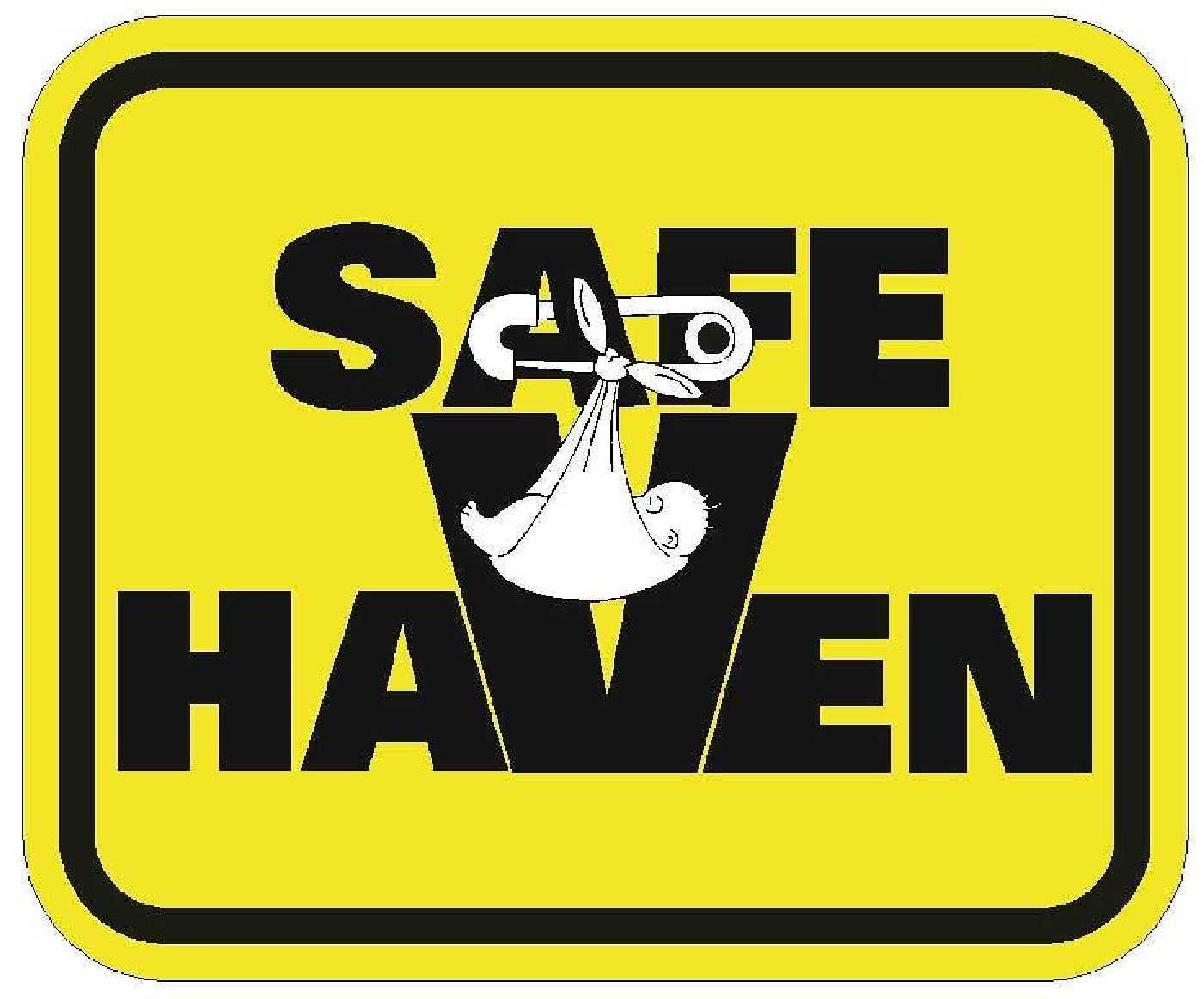 At least, we know today what the market wants, safe havens

As we mentioned above, forex traders are not sure what to buy at the moment. They want to buy the USD because the US economy is doing quite well and the Fed is tightening the monetary policy. But Trump’s actions are scaring traders away from the Buck.

The Euro has gone up too fast in the last year so the risk/reward ratio is not great. The GBP has also climbed quite quickly and Brexit looms over our heads. Therefore demand has decreased for these two currencies as well.

Commodity currencies will be affected by Trump’s steel and aluminium tariffs since these economies are based on commodity exports, so they are out of the question as well. The Australian employment report wasn’t that great last night either.

All that’s left are the safe haven currencies; the JPY in particular. The CHF has also seen some decent bids recently but demand is greater for the JPY. The market has been trying to break the support area in USD/JPY which stretches from 105.00 to 105.50.

This support level has been very stubborn for more than a month. It has resisted attempts to break it, but sellers kept bringing price back down time after time. Yesterday, the top of the range at 105.50 was broken which means pressure increased on the downside.

I woke up this morning to see that the 105.00 level was broken as well. This is the first time that USD/JPY moves below 105 in more than a year, so the bearish trend has picked up pace in this pair. Therefore, we are trying to open a sell forex signal here which we will explain below.

Gold Breaks Above the 50 SMA and Turns Bullish

Price formed a support level around the $1,300-1,305 area during this time. The 100 SMA (green) on the daily chart caught up with price this week which added extra strength to this area. Sellers could not push below $1,300 and now buyers are back in control. If an instrument does not want to go down then there is only one way left: up.

Gold is the ultimate safe haven so demand has increased as uncertainty has increased. In the last two days, buyers were playing with the 50 SMA (yellow). But today, demand for safe havens increased further as USD/JPY broke below 105.

Demand for Gold increased as well which can be observed by price moving considerably above the 50 SMA. Now the picture looks quite bullish for Gold. If you are trading Gold, make sure to be on the right side: long. I would wait for a retrace lower though before entering a trade. 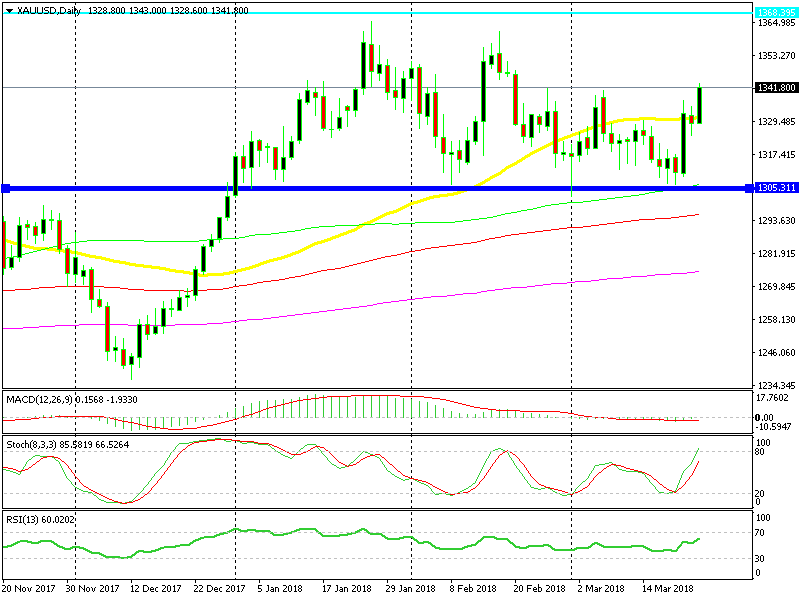 The 50 SMA is history now 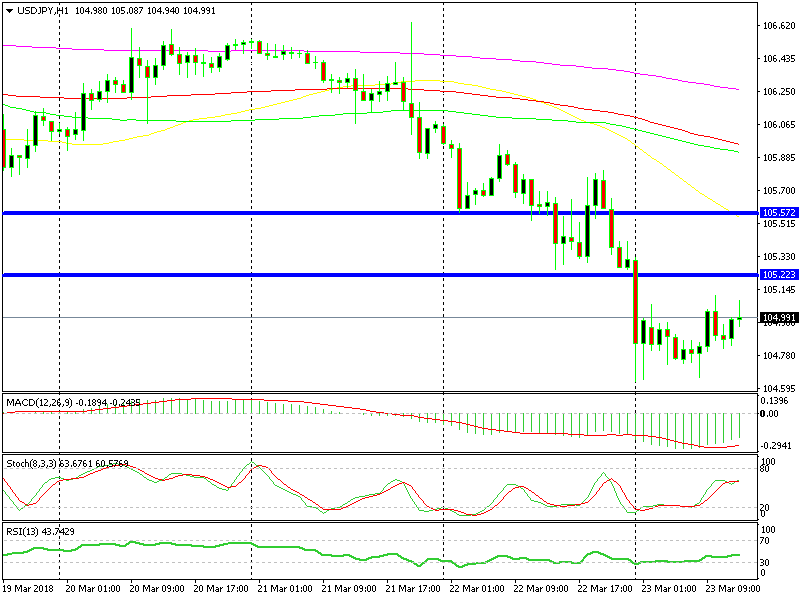 The 105 level is turning into resistance now

The support at 105.50 has now been broken. It should normally turn into resistance as this pair retraces up. The retrace is almost complete since stochastic is nearly overbought. The 20 SMA (grey) has also caught up with price and it is providing resistance as well. For these reasons, I think we should open a sell forex signal around here.

The market is unsure what to do now so the safe havens are benefiting from the uncertainty. We are short on NZD/USD already and are thinking of opening another sell forex signal, this time in USD/JPY since the JPY is a safe haven currency.