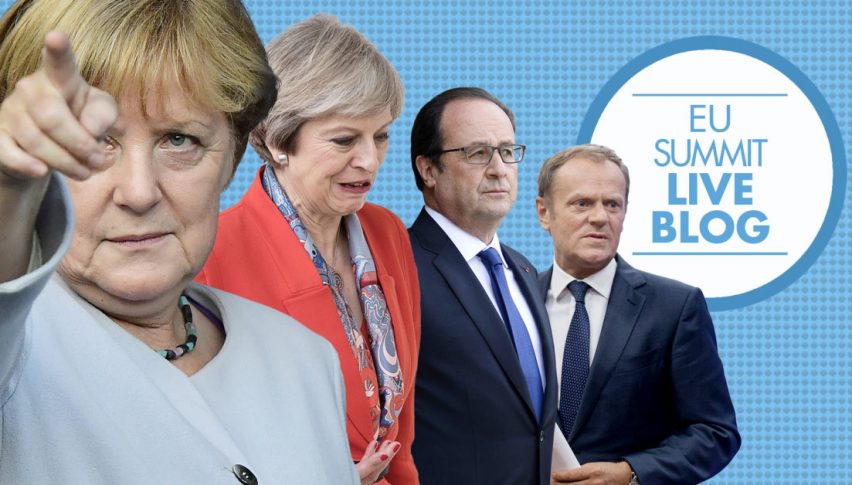 The EU summit is taking place this week. Britain is leaving but the other EU leaders are pushing for more integration. I think they have realised that you cannot hang around forever doing nothing and expect things to get better. Things have a tendency to rot if you don’t keep moving and evolving with time.

United States of Europe Should Be Positive for the Euro

The EU summit is underway today in its second day. The main issue is Brexit although unlike the UK, which will have this problem for the long run, for the EU this is a short-to-mid term issue. One of the problems that Brexit brings along, is the EU budget. The UK is the second biggest contributor to the EU budget. So its departure will leave some holes in the pockets of the EU.

That’s if the UK pursues a really hard Brexit. Even in that case, Britain will likely be forced to pay some cash into the budget. But, it seems like the UK government is taking the soft Brexit path, which means that the UK will have to cough up a lot more, probably as much as it contributes now. And that comes without much of a say inside the EU.

The long term challenge for Europe is the Federal Europe. With the departure of Brtain which is doesn’t really mean a departure now that soft Brexit is happening, Europe has come to the conclusion that the integration should accelerate before everything falls apart.

Cryptocurrencies are also emerging and they will also increase the mobility of the capital. The capital will be easier to fly out of countries and into safe havens. Safe havens are another headache. Only Switzerland used to be a safe haven until a couple of decades ago, now there are tens of statelets which act as safe haven.

Mass migration is the most evident effect of globalization and that’s another major issue Europe and the USA are trying to address and will be addressing it a lot more. Europe is already paying billions to Turkey and the North African states to keep immigrants there and not send them to Europe, while Trump is taking care of China.

You can’ take care of globalization if you are a small country, like the UK. The UK is a relatively small country nowadays, despite many Britons still thinking they are a global empire. But in reality, it is small and it will smaller as other parts of the world develop and grow. Countries like the UK and France still hold some power, but the strength is diminishing relatively to the new world that is evolving.

Neither of them, let alone smaller European countries, can’t tackle the globalization issues. So, the only way is to group in bigger formations according to culture, race, region etc. The EU is the first real attempt to build such a formation.

The African Union is underway too. Which one is next, South Asian Union? Will there be a Middle Eastern Union. We don’t know how fast thing will move but we know this is the way, not the chaotic globalization that has occurred these last 30-50-100 years, depending on the country.

So, although there are many who oppose the EU, that’s the only way forward, otherwise it will be chaos, as it has been during this time. Globalization has been the cause of Brexit. The UK wanted a way out of this global madness, for which they have contributed a great deal themselves. But, you can’t get out of it just like that, it takes time to build institutions and get closer together, which is what the EU has been trying to do.

Yesterday, the French PM Macron called for more integration while Merkel said earlier today that the EU needs to build an European Monetary Fund. The Banking and other sectors of the European economies are being consolidated, so we’re heading for Federal Europe.

This is mildly positive for the Euro at the moment and the Euro has found a few bids today. The GBP on the other hand has been losing considerably ground. Inflation is cooling off in the UK, so the BOE (Bank of England) might not hike interest rates in May, we will see. 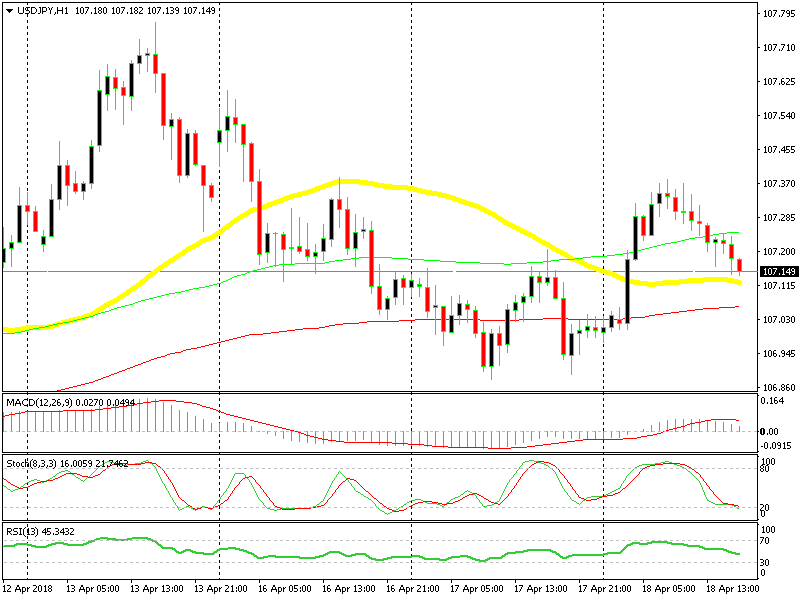 The 50 SMA held its ground

We are long on this forex pair already since last Friday. Yesterday the pullback lower stretched further but the uptrend has resumed again today. There was another retrace down early today, but the 50 SMA (yellow) provided support and stochastic has become oversold, so I think the bullish trend will resume soon. If you are not following our USD/JPY signal, then you can buy right here.

The Bank of Canada will release the interest rate decision and the statement very soon so I better get this update posted and see what the BOC has in its bag. USD/CAD is waiting in limbo since the US crude Oil inventories will be released at the same time, which means double whammy for the CAD.