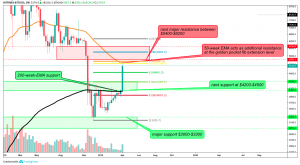 Bitcoin broke the major resistance between $4200-$4500 which is extremely bullish. Currently sitting at $5112, there is nothing which holds Bitcoin back from rising to the $5500 range, where Bitcoin faces multiple resistances, such as the golden pocket fib extension level and the 50-week-EMA. Once broken, the re-test of the $6000 mark is overdue. In case of rejection of the $5500-$6200 regions, Bitcoin finds its next support at around $4200-$4500, where the 0.382 fib extension level and the 200-week-EMA act as additional support. Thus, everything above the $4200 mark remains bullish. For now, Bitcoin’s outlook is indeed very bullish and we might see no retracement before reaching the $5500 resistance. 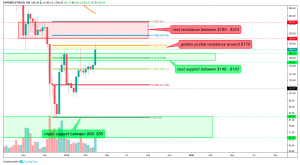 Ethereum bullishly broke the resistance between $148-$163 which now acts as strong support. The weekly candle is currently slightly below the golden pocket extension level, which must be broken before we see a re-test of the $200 mark. In case of a heavy rejection of the next resistance, Ethereum finds additional support at the $138 mark, where the 0.382 fib extension level is located. 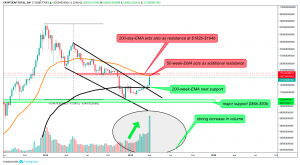 To conclude, the bigger timeframes indicate bullishness and bullish months might be ahead. However, we need to break the major resistances before we can assume the start of a new bull market. While the technical analysis looks extremely bullish, one has to exercise caution with placing long positions, since a short-term retracement should take place very soon and, as long as the major resistances are not broken yet, it still could be a major bull trap. Yet, the market is very bullish and both BTC and the total market capitalization have around ten percent room to the upside before a retracement is likely to appear.

The biggest gainers of this week were
ShineChain, which rose by more than 480 percent,
Educare, which surged by more than 324 percent and
Lambda, which gained by 122 percent.

The major news of this week was that Vitalik Buterin has reportedly urged South Korea to deregulate blockchain and that Ripple, Swift, Cardano, IOTA, ConsenSys and the EU are launching a joint Blockchain network called INATBA.