Are Moving Averages Going to Turn Into Support for EUR/USD Now? - Forex News by FX Leaders 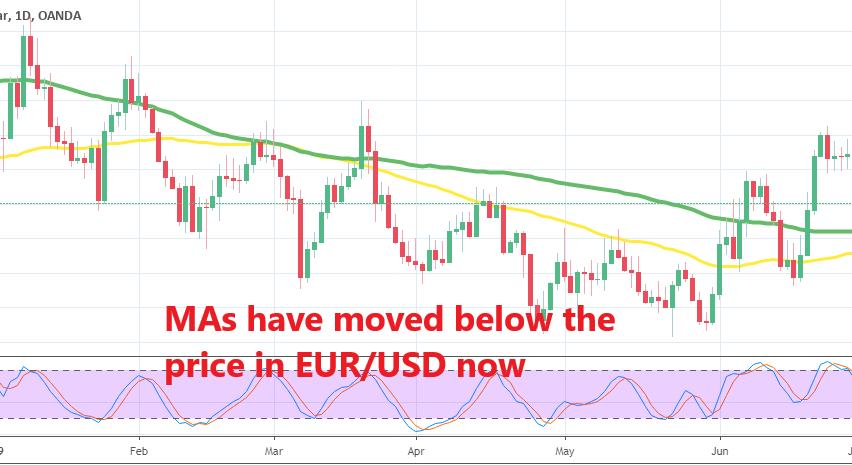 Are Moving Averages Going to Turn Into Support for EUR/USD Now?

EUR/USD has been on a bearish trend for a long time. The trend has lost pace in recent months, but this pair has been making new lows during this time which means that the downtrend is still in play in this pair. Although, a new support area has been formed above the 1.11 level from where this pair has bounced off a few times.

If you see the smaller period charts, you cannot see the larger downtrend because in the last few weeks this pair has been retracing higher on the daily chart as you can see above, but the small time frame charts do not show the bigger picture. The recent climb has come from the USD side because the Euro does not have any reason to rally.

Yesterday we saw a decent bearish move which came as a result of the positive tones from Donald Trump and Chinese officials after the G20 summit. This removes one of the risk factors for the US economy and the USD, which improves the sentiment surrounding the Buck.

As a result, EUR/USD turned bearish yesterday and made a decent move lower worth around 100 pips. But now the sellers are facing the moving averages which provided resistance on the way down. The price approached the 100 SMA (green) yesterday and it has pulled back higher today, which raises the question whether the sellers can push below that and the 50 SMA (yellow).

The fundamentals are pretty bearish for the Euro as the economy continues to weaken, but the ECB said today that they might not cut interest rates soon as markets are anticipating. So, we could see a bounce from here, although we have to follow the price action in the coming session because the buyers are not making any strong moves today either.