The WTI crude oil prices dropped mainly due to the optimism surrounding the United States and Iran war. The US Crude Oil WTI Futures was unchanged at $59.04. Last week, the US crude benchmark posted a 6.4% fall in prices, its most significant weekly loss in more than 6-months, as tensions between the US and Iran eased.

At the Iran-US front, the fears have eased since Iran shot rockets at US-Iraqi bases during the last week to take revenge for the United States for killing its top Iranian general.

As we are all well aware, the United States House of Representatives showed favor to control the United States President Donald Trump’s power to strike against Iran last week. In addition, Vice President Mike Pence said that the Islamic Republic had ordered armies in the Middle East not to perform an attack against the United States’ interests.

It is worth mentioning that the situation in Iran is still active because its citizens protested for a 2nd straight night after the government acknowledged on Saturday that it had mistakenly shot down a Ukrainian passenger jet, killing all 176 people on board.

At the Sino-US trade front, the United State and China trade tensions continue to ease. Both countries are ready to sign an official trade deal this week. Additionally, the White House Economic Advisor, Larry Kudlow, has said that everything depends on the trade deal, whereas the US Treasury Secretary Steve Mnuchin told markets that there will be talks on the phase-two of the US-China trade deal when the Chinese delegates arrive on January 15. 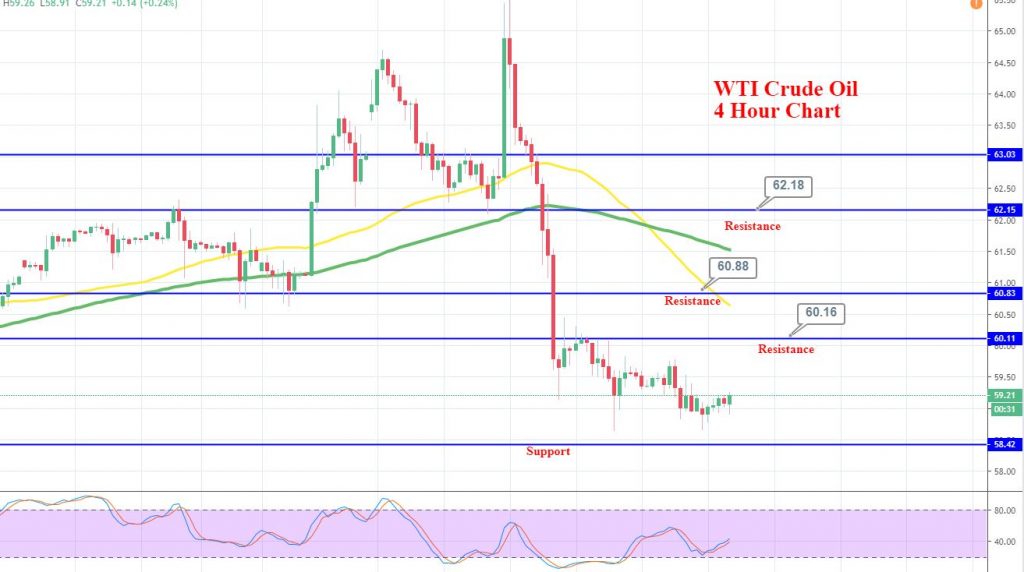 Technically, crude oil is holding below a strong resistance level of 60.11 as below this, oil prices can dip further until 59.35. Whereas, the violation of 59.35 can cause further dip until 58.45 in oil prices.
Besides, the bullish breakout of 59.35 can lead to oil prices higher towards 60.85. Let’s stay bearish below 60.15 and bullish above the same level today. Good luck!